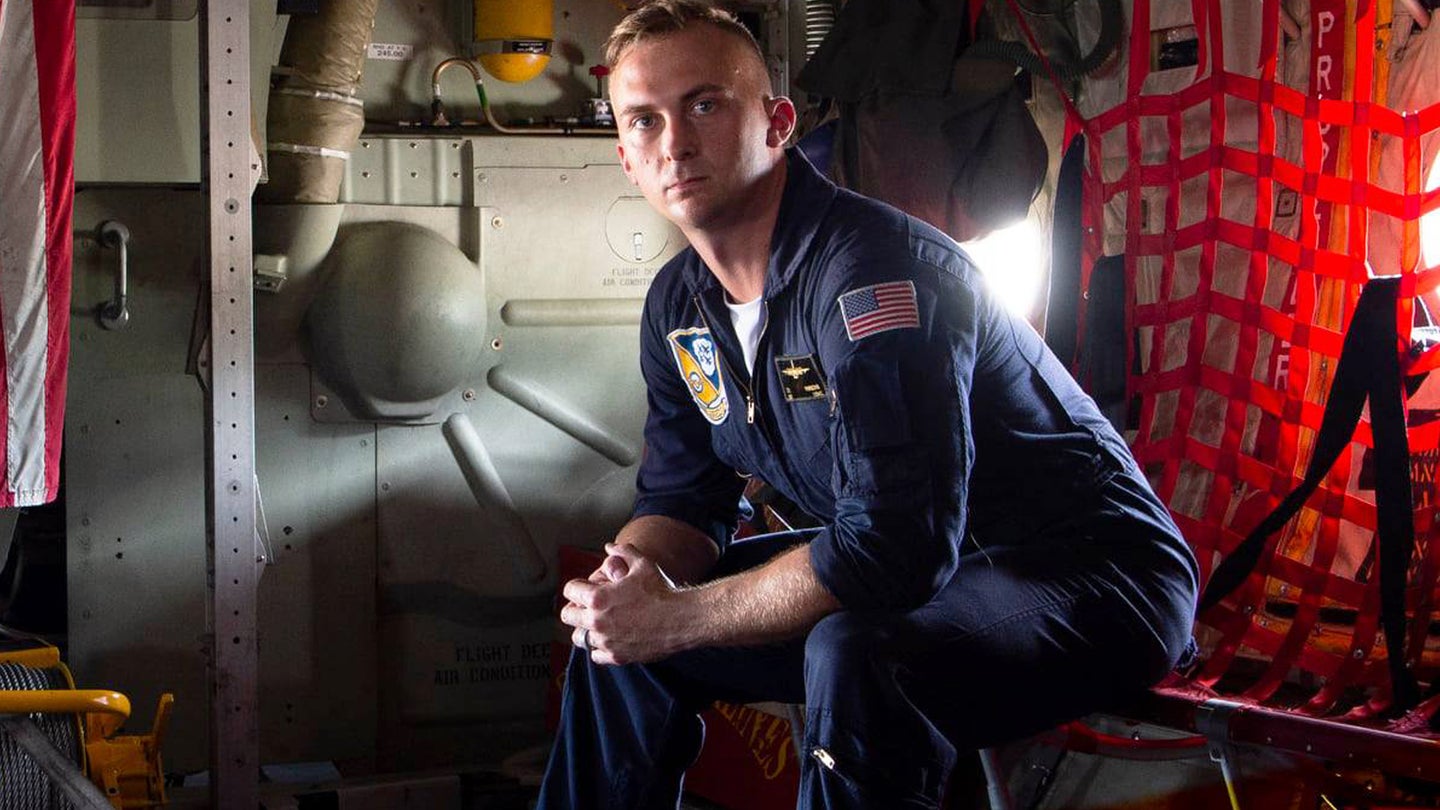 A Marine sergeant assigned to the Navy ‘Blue Angels’ flight demonstration team has been awarded the highest non-combat medal for heroism after saving three children from drowning off the coast of North Carolina.

Sgt. Zachary Parsons was awarded the Navy and Marine Corps Medal last week “for his actions which directly resulted in the saving of three lives” on May 26, 2019, according to photographs uploaded to the military’s online image repository. A corporal at the time, Grayson, Kentucky-native was spending time at the Memorial Park beach in Pine Knoll Shores with his wife when he helped save three children between the ages of three to nine from drowning hundreds of feet offshore.

Equivalent to the Army’s Soldier’s Medal, the Navy and Marine Corps Medal is higher in precedence than the Bronze Star Medal and recognizes members of the Navy and Marine Corps who “distinguish themselves by heroism not involving actual conflict with the enemy,” according to the awards manual. “For acts of lifesaving, or attempted lifesaving, it is required that the action be performed at the risk of one’s own life.”

Parsons made his rescue after three children were pulled nearly 500 feet from the shoreline due to dangerous high surf and rip currents at about 2:35 p.m, according to a summary of action provided by the Blue Angels.

Sometimes mistakenly called undertow, rip currents form as narrow streams of water when waves break near the shoreline, pulling anything in their path away from the shore, sometimes at speeds in excess of five miles per hour. Nearly 60 people died from rip currents in 2019, but Parsons wasn’t concerned with that.

As the summary notes:

At approximately 1435, Corporal Parsons noticed that the three children were being knocked off their feet by the waves, pulled out by the current, and were struggling to get back to shore. The father of the children went out to assist, but soon became overwhelmed by the current himself and began shouting for help. Upon hearing the father screaming for help and without hesitation, Corporal Parsons directed his wife to call 911. He then ran to the shoreline to assess the situation. Making a key decision, he acquired the nearest flotation device he could find, which happened to be a neighboring family’s boogie board. He then entered the hazardous waters. At the same time, another bystander, SO1 Palmer, had taken the same assertive actions from a nearby location and entered the water in an attempt to help rescue the family in distress.

“Exhausted from his efforts,” the summary reads, Parsons “transferred the children over to the emergency services. He then began to visually search for the father who was last seen when he began to signal for help. The father could not be located by eyesight from the beach and a search ensued with the help of Atlantic Beach and Indian Beach emergency response crews and watercraft. Approximately 15 minutes later, emergency crews located the father and brought him to shore via Jet Ski. Paramedics performed Cardiopulmonary Resuscitation (CPR) on the father, while other first responders tended to the children who were transported to Carteret Health Care in good condition.”

Paramedics were unable to revive the father, the summary said.

“Sgt. Parsons’ heroism that day serves as a testament to the deep-rooted desire to serve and protect that represent the core values of the United States Military,” the caption says of the Marine, who is currently assigned to the five-person team that maintains “Fat Albert,” a hulking C-130J Super Hercules aircraft the flying team uses to haul its gear and spare parts between air shows. Parsons joined the crew in July 2020, according to the unit’s Facebook page.

“I’ve always admired the Blue Angels since the start of my military career,” Parsons said. “I never thought it would be possible to make the team, so being a part of all of this now is just an honor.”

This isn’t the first time a Marine has saved someone from drowning. A different Marine sergeant stationed at Camp Lejeune, North Carolina did exactly that in a separate incident earlier that same month and saved a 10-year-old boy.

“I dove into the water before I even knew what I was doing,” said Sgt. Danny McDonald, who also received the Navy and Marine Corps Medal. “I didn’t put much thought into it.”

This article was updated with additional information from the summary of action provided by the Blue Angels after publication.