By the hammer of Thor! A Nevada National Guard soldier can now rock a Norse beard

I am called Glad-of-War, Grim, Raider, and Third. I am One-Eyed. I am also called Highest, and True-Guesser. I am Grimnir, and I am the Hooded One. I am All-Father, Gondlir Wand-Bearer. I have as many names as there are winds, as many titles as there are ways to die. My ravens are Huginn and Muninn, Thought and Memory; my wolves are Freki and Geri; my horse is the gallows. I am Odin! 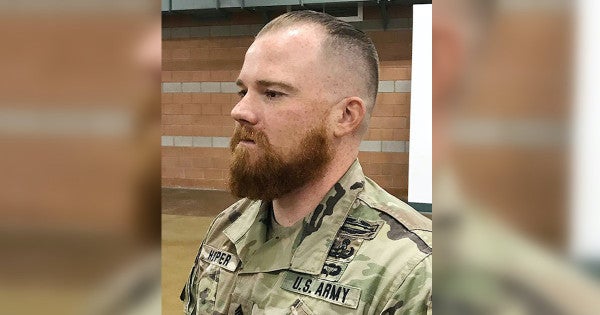 Hear me Odin! Of beards and men I sing.

I bring you the tale of Sgt. 1st Class Benjamin Hopper, an explosive ordnance disposal technician deployed to Afghanistan with the Nevada Army National Guard.

An observant Norse Pagan, Hopper has been allowed to wear a great, big, bushy beard under a religious accommodation to Army Regulation 670-1 Wear and Appearance of Army Uniforms – which is not to be confused with “American Gods” by ‎Neil Gaiman.

“My personal faith is deeply tied to the modern warrior lifestyle that I have been able to live during my military career,” Hopper said in a news release from the Nevada National Guard. “In short, it is honoring the pillars of Heathenism, our ancestors and ancient gods and way of life.”

After a March 2017 Defense Department memo recognized Pagans along with Sikhs and Muslims as religious groups that merit accommodations to grooming standards, Hopper formally requested to grow a Norse beard, known as a Skegg.

Nevada's adjutant general at the time approved Hopper's waiver to grow the Skegg.

Two other Pagan soldiers with the Nevada Army National Guard have asked to grow Norse beards. Like Hopper, they must be interviewed by a chaplain to prove that their request is based on sincerely held religious beliefs.

“The chaplain corps will work with any military member to aid them in a genuine pursuit of an accommodation,” Maj. Donald Crandell, chaplain for the Nevada Joint Force, said in the news release. “However, we are not actively promoting a trend in this direction or seeking to normalize it.”

While religious accommodations for Norse troops may be recent, the U.S. military has a longstanding fascination with Norse mythology, especially Odin, the god of war, death, and wisdom.

Still, Hopper says he has had to provide documentation to commanders, who were unaware that he is allowed to wear a beard.

“I see it as a phase very similar to when the Army authorized the wear of black socks during the fitness test,” he said in the news release. “It is something new and authorized and you will always encounter people who do not like change – that is just life.”