The Army will field its new World War II-throwback uniforms over a period of eight years to ensure that enlisted... 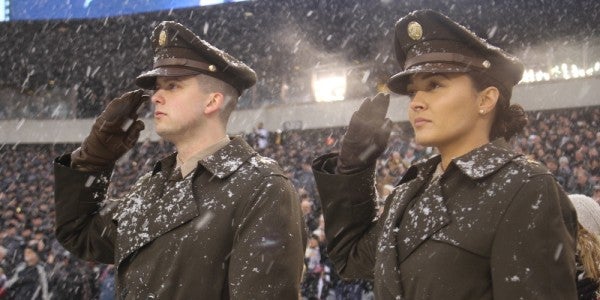 The Army will field its new World War II-throwback uniforms over a period of eight years to ensure that enlisted soldiers have plenty of time to accumulate enough money from their clothing allowances to buy them, a top service spokesman said on Monday.

New soldiers will begin receiving the “Army Greens” at their first units in summer 2020 and the uniform will become mandatory to wear in 2028, officials told reporters at a roundtable.

For soldiers who join their first units in spring 2020 – right before the Army Greens are issued – it will take six years of clothing allowances before they have enough money to purchase the uniform without spending any of their own money, said Brig. Gen. Omar Jones, head of Army public affairs.

“So there’s no requirement for them to buy anything for this uniform until the U.S. Army has given them every single dollar to pay for that uniform,” Jones told reporters at a media roundtable. “For them, that would be the spring of 2026.”

However, the actually cutoff, Jones explained, is 2028, so that “that every soldier in the U.S. Army ample time to get the uniform at no cost.”

Army Greens are expected to cost more than the current service uniform but should last longer – for six years as opposed to four, officials said at Monday’s roundtable. It is too early to say exactly how much each soldier will have to pay for Army Greens, in part because the design is still being refined.

“The one I wore – the one you saw – has a gold belt buckle,” Sergeant Major of the Army Daniel Dailey explained on Monday. “That’s not going to be the color on the final one. It’s going to be subdued, like the buttons. The chief of staff of the Army has made a slight change on the length of the collar on the male jacket.”

The Army is also making the uniform’s shirt a higher blend of cotton so that it can breathe better and feel more comfortable, said Col. Stephen Tomas, of PEO Soldier.

Over the next 90 days, the Army will issue 200 uniforms to recruiters and then make further adjustments based on their feedback, Thomas said.

Soldiers will also be issued a World War II-style garrison cap, but commanders will have the option of requiring subordinates to wear the beret instead, Thomas said. The leather-trimmed service cap will be an optional item, as well.

Although Army Greens have been referred to as “Pinks and Greens” in the past, Dailey explained that was a nickname given by soldiers to a similar uniform worn during World War II.

“That’s not the true name of the uniform,” Dailey said. “One of the sets of pants had a pink hue to it. These do not.”

SEE ALSO: The Air Force Is Down With The Army’s OCP. The Other Branches, Not So Much