Jet packs and helmet radios: what the Army’s 1959 ‘soldier of the future’ got right and wrong 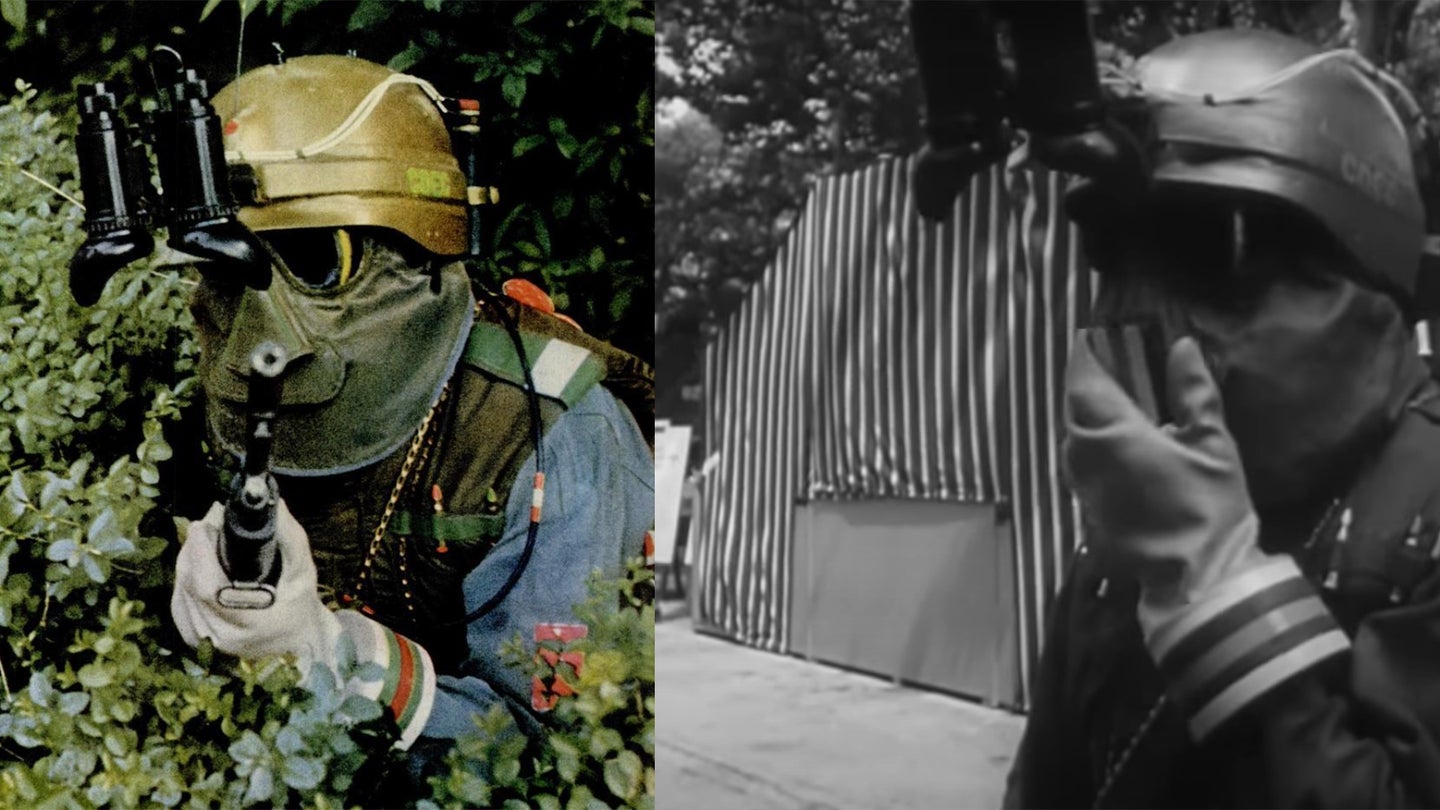 Closer than you think to reality. (Task & Purpose/Time Magazine).
SHARE

Take a look at this Army soldier:

He’s got a full kit – infrared goggles, a radio built into his helmet so he can communicate with other troops, body armor, and a mask and gloves that shield him from atomic radiation. On his back is a jet pack for vaulting through the air across trenches, bunkers, craters, and anything else his presumably Soviet foe can come up with.

This is the Army’s vision of the ‘soldier of the future,’ as envisioned in 1959. Does he look like a character in Fallout? Kind of. Does he also look like a soldier in 2022? Also kind of.

Here he is demonstrating his capabilities in Washington, D.C.

An accompanying Time magazine article lays out everything that will equip the modern soldier, here represented by Sgt. 1st. Class Ben Sawicki, including “a camouflage suit, a bulletproof vest, mask and gloves for protection against a nuclear blast and light, plastic helmet with a built-in radio.

As the Army said at the time, the GI of the future “will look so weird he may scare the enemy to death without firing a shot.”

At first glance, this soldier doesn’t look anything like what was to come. Blue fatigues? A rocket-powered jump belt giving him the ability to leap 30 feet in the air? Still waiting on that (although the Navy did eventually go for those blue uniforms).

What is interesting, though, is how much this uniform did, in fact, predict what was to come. Let’s start from the top, at the head.

The helmet, of course, is a change from the M1 steel pot that the Army and Marine Corps used from 1942 into the early 1980s. But that design, molded to cover the ears, is starting to resemble what would be adopted with the Personnel Armor System for Ground Troops, or PASGT, helmet, and today’s Marine Corps Lightweight Helmet or Army Advanced Combat Helmet.

Sawicki is also equipped with an early iteration of night vision goggles. These were first developed during World War II, and the earliest versions had ranges of less than 100 yards. Even a decade after this video was filmed, the U.S. military was still using the bulky, cumbersome AN/PVS2 “Starlight Scope,” but within another 10 years the Pentagon would start to adopt helmet-mounted night vision goggles like the ones seen in this video.

Sawicki also has a radio built into his helmet. He’ll be able to communicate with every member of his squad and platoon. Gone are the days of one man lugging around a AN/PRC 25 radio, the soldier of the future will be able to talk right from his helmet, much like modern-day battlefield communications headsets.

What didn’t catch on was, obviously, preparation for the atomic battlefield. Sgt. Sawicki here is kitted out with a hood and thick gloves to let him roam freely on the presumably radiated battlefields of Europe. That has not come to fruition, and soldiers today are not walking around looking like they’re ready to cross the battlefields strewn with atomic bomb craters envisioned in 1959.

There’s also the “rocket-powered jump belt.” In theory, this would allow a soldier, like Sgt. Sawicki, to make 30-foot leaps over the craters and trenches of the 1959 battlefield. The system did nearly come to fruition with Bell Textron Rocket Belt, which was demonstrated before President John F. Kennedy Jr. at Fort Bragg in 1961 but never made its way to the battlefield.

The jump belt was an ongoing fascination with the Army – the idea that troops could use their jet packs to rapidly traverse terrain. Indeed, when this video was filmed, the Army was grappling with how to make itself useful when it appeared that the next war would involve a massive exchange of nuclear weapons. It was reorganized into “Pentomic” divisions, able to rapidly disperse into separate units and fight independently.

The jump belt wasn’t exactly practical, though, and despite many attempts to do so in the intervening years, it still hasn’t been perfected some 70 years later. And, honestly, would you trust a Specialist or Lance Corporal who had the ability to just fly away when ordered to mow some grass?

For all of today’s service members, what you’re wearing and using may have been around for longer than you think. And be thankful that you’re not wearing CBRN gear 24/7 in the field for many, many reasons beyond just comfort.