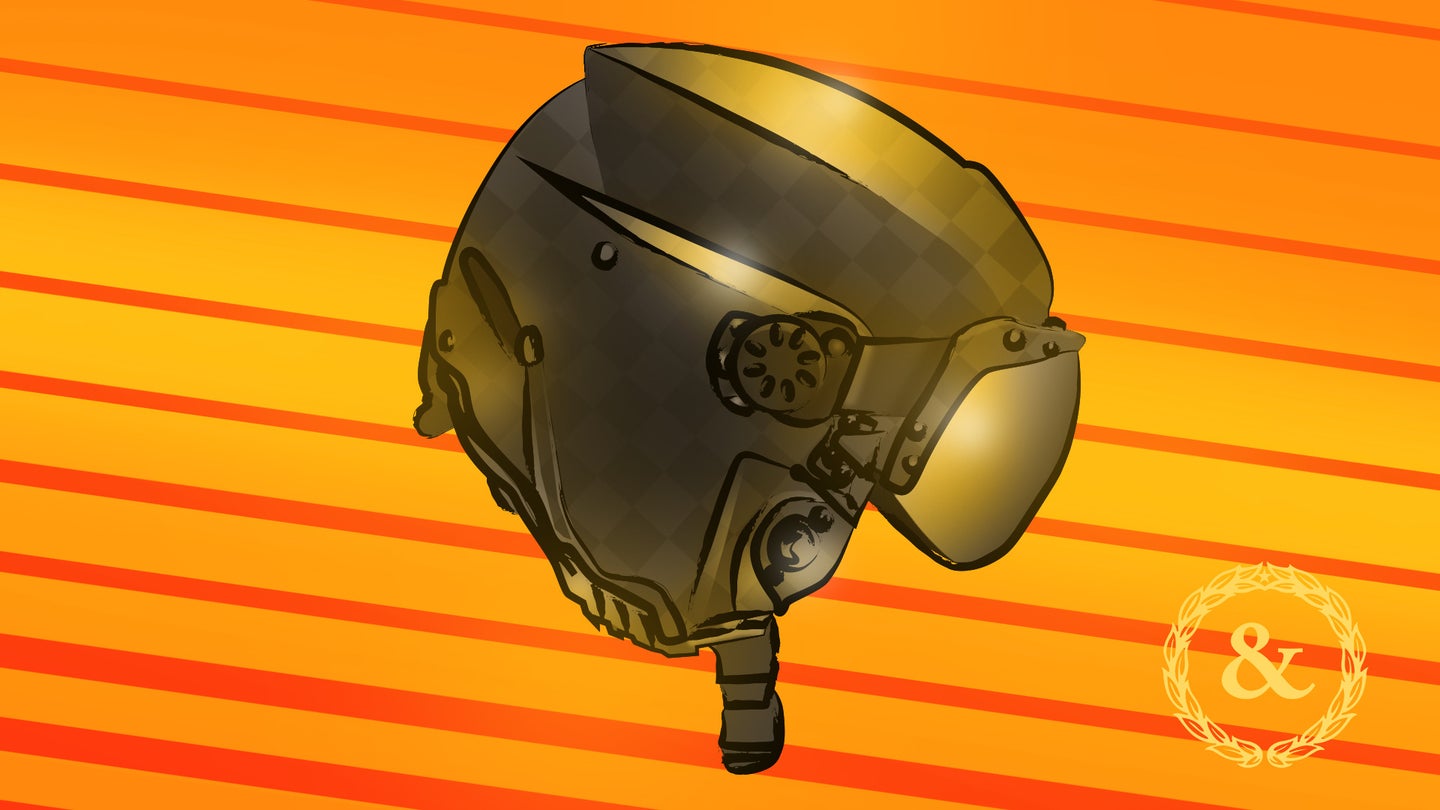 Most people update their wardrobe every once in a while, and after 40 years, the Air Force is looking to do the same with one of the most important pieces in its catalog: the helmet aircrew members wear while performing the essential, often dangerous missions required of them.

After several years of searching, the Air Force announced on Saturday that it had selected a company to proceed with prototype development for a new flight helmet that could become standard issue for fixed-wing aircrew members across the service (except for F-35 pilots, who have their own $400,000 helmet). Though the Air Force did not give the helmet a specific name in its press release, LIFT Airborne Technologies, the company behind it, calls it the AV 2.2 Next Generation Fixed Wing Helmet. The helmet is said to be lighter, better ventilated, and more adaptable to helmet-mounted devices than the gray HGU-55/P helmets crews have worn since the 1980s.

While the new helmet still has to undergo more research, testing, and improvements, Air Force officials appeared excited about selecting it for prototype development. The legacy helmet currently in use “was not originally designed to support advances in aircraft helmet-mounted display systems,” Scott Cota, an aircrew flight equipment program analyst for Air Combat Command, said in a press release. Such devices add weight to the helmet and change its center of gravity, which leads to discomfort for air crew members. That discomfort is not just annoying: it’s a long-term health risk that has ended the career of many an expensively trained aviator.

The old 55/P helmet weighs 2.2 pounds, according to manufacturer Gentex. Though that sounds light, it adds up when pilots pull nine times that weight in a high-G maneuver. The average weight of a human head is about 10 or 11 pounds, so that, plus the helmet, equals about 120 pounds or more of weight sitting on your neck at nine Gs.

“Not only is that uncomfortable to be under nine Gs when you’re flying, but the biggest issue is later in your career when pilots start having neck and back issues,” said Air Force F-35 and F-16 fighter pilot Maj. Justin “Hasard” Lee in a video about aircrew helmets. “I know unfortunately a lot of pilots that have had to be medically retired because of that.”

American pilots are not the only ones who deal with this issue. According to a 2012 study, 72% of surveyed Royal Norwegian Air Force pilots experienced neck pain in relation to flying, while 35% experienced back pain. Neck rotation was a major cause of grief for the pilots, particularly “checking six,” meaning to look behind them, the study found. To help keep its dwindling number of fighter pilots in the service, the U.S. Air Force actually contracts athletic trainers, strength coaches and massage therapists to help pilots better prepare their bodies for the strain of G-force.

“The idea behind the program is the preventive maintenance,” said F-15C pilot Maj. Clayton “Red Beard” Cruichshank about a physical training program at Nellis Air Force Base last April. “Rather than waiting until someone has a back or neck problem, we’re already training to be stronger before problems occur, so we’re better able to handle the stresses.”

The long-term neck and back health of aviators was one reason why the Air Force started looking for a new helmet. Guido Rietdyk, CEO of LIFT Airborne Technologies, said the goal “is to have the helmet not exceed 2.2 lbs in any size or configuration,” which could be great if “any configuration” includes the weight of helmet-mounted devices. Aviators have a lot of gear they often have to mount to their helmets to do their jobs. For example, fighter pilots use the Helmet Mounted Cueing System, which shows flying and targeting data on a heads-up display on the pilot’s visor. For night flying, they also wear night-vision goggles, but switching between the two with the old helmet was a real headache.

“I’ve flown a lot of night combat missions,” Lee said. “The thing was, you’d fly with the HMCS, until it got dark, you’d have to take off the helmet, take off the HMCS system, put on a bracket, put on your night vision goggles, and so that was a whole process.”

That’s a problem when you’re flying a close air support mission for ground troops under fire who don’t have time for you to adjust your headgear.

“That’s time you’re taking away from the troops on the ground,” Lee said. “So being able to streamline that process is important.”

The Next Generation Fixed Wing Helmet makes it easy to attach the NVGs, with no extra bracket required, Lee said.

Another reason why the Air Force went looking for a new helmet is the fact that many of its aviators today do not look the same as their 1980s predecessors. Capt. Timothy James, a program manager at the Air Force Life Cycle Management Center, said that the new helmets will provide a “better fit for operators of all sizes, genders and ethnicities.”

Helmet fit seems to be a problem for many aviators wearing the old 55/Ps.

“The current 55/Ps are terrible!” one C-17 cargo jet pilot told Task & Purpose in December. “Mine has never fit right since pilot training,” he added. On top of that, the old helmets are swampy pits after a long flight.

“They don’t breathe at all,” he said. “It’s a huge relief when we get to take off the helmet after a flight or during pilot swap out.”

A navigator aboard a WC-130J weather reconnaissance plane shared his opinion of the old helmets. Like the C-17 pilot, Withee and his fellow WC-130J aviators don’t have to wear helmets very often, but when they do, it’s not the most pleasant experience.

“For me it doesn’t fit great around the ears so it doesn’t do a great job with isolating noise,” said Lt. Col. Mark Withee, a navigator with the 53rd Reconnaissance Squadron, in December. “After a while it’s also pretty uncomfortable with the way it’s squishing my head.”

The new helmets seem to address both the issues with fit and ventilation. Lee, the F-35 pilot, said the new brain bucket has a few knobs for adjusting various parts of the headwear so it fits just right. The pilot also custom-fitted the helmet on his own using an in-depth app that comes with it, he said.

A comfortable fit is more than a creature comfort. Having a helmet jostle around in the middle of a mission could be a potentially dangerous distraction. There are also certain heads-up display tools such as the Helmet Mounted Cueing System, where the pilot’s eyes have to be centered properly for him or her to see the signals within.

“They actually did a great job,” Lee said of the LIFT helmet, which also has vents in the back where sticky air can go out. “The helmet has this dynamic fit system which means it’s a lot more comfortable than the old helmet.”

Fit, ventilation and devices aside, another neat gimmick that the new helmet has is a pair of lights mounted to the sides. Those lights help aviators read maps or other documents in flight, but the really cool part is how you turn it on. In the past, pilots brought flashlights to read flight documents, but that meant they had to take a hand off their flight controls to hold the flashlight. Some pilots tried strapping lights to their fingers, or wearing tongue-activated lights on their oxygen masks, but Lee found those solutions clunky or unappealing. This new helmet is activated by a button which the aviator presses by clenching his or her jaw muscles. There are different activation settings pilots can choose, but Lee demonstrated using a short clench, followed by a long clench, to activate the pair of lights on his helmet.

“I was skeptical about this at first, but it actually works surprisingly well,” Lee said. “It’s probably the best solution that I’ve found to lighting up the cockpit.”

The helmet doesn’t just shine a light, it also blocks out loud engine noise, Lee said, which is “huge” on a six to eight hour mission.

LIFT’s helmet emerged ahead on top of more than 100 different design ideas the Air Force received since it first began working on a replacement in 2019. In fact, it was one of the first initiatives to go through AFWERX, an Air Force group dedicated to working with smaller “nontraditional” defense companies to help make their ideas a reality, the Air Force said in its press release.

If the helmet passes the next stage of research and testing, the Air Force will offer a production contract in 2024. After that, Air Combat Command plans on using a phased approach to deliver the new gear to fixed-wing aircrews across the service, starting with the F-15E Strike Eagle.

“Every little piece of equipment you have, you want to make sure it’s updated so you can be as lethal and capable as possible,” Lee said. “They’ve gone through this helmet and made everything seamless for the pilot.”