Editor’s Note: This article by Matthew Cox originally appeared onMilitary.com, the premier source of information for the military and veteran community. The Navy is... 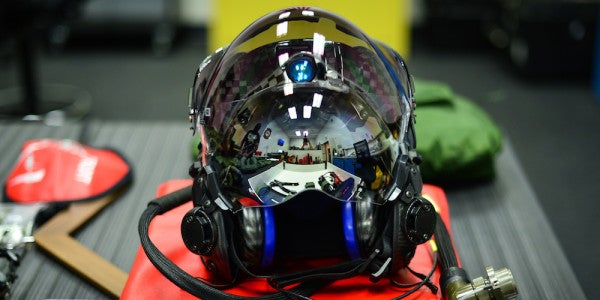 The Navy is close to fixing a technical bug in the sophisticated F-35 Joint Strike Fighter helmet that amounts to a dangerous hindrance for aviators attempting to land in the black of night on a moving aircraft carrier.

F-35C pilots describe the bug as a green glow created by the LED technology in the Generation III helmet-mounted display, which spills over and prevents them from seeing a carrier's lights at night.

“At night on carriers is about the darkest you can get when there is no moon,” Cmdr. Tommy “Bo” Locke, commander of Navy Strike Fighter Squadron (VFA) 125 told a group of defense reporters in the flight hangar on the Abraham Lincoln Monday.

Related: This Never-Before-Seen Nighttime F-35 Helmet Cam Footage Is Both Intense And Revealing »

For a week now, Locke's squadron has been participating in Operational Testing I, a milestone that represents the first time the F-35C Lightning II has joined in regular carrier flight operations at sea.

The Navy has attempted to fix the helmet problem with software upgrades to allow pilots to dim the green glow, but so far, only the most seasoned F-35C pilots are allowed to make carrier landings at night.

Currently, to be qualified to land on the carrier in the dark without fixes to the F-35 helmet, pilots need 50 carrier landings, officials said.

The state-of-the-art Gen III F-35 helmet “is a significant leap in technology from its F-16 predecessor,” according to the DoDU.S. Air Force/R. Nial Bradshaw

The Navy is working on a solution that relies on “organic LED,” or OLED, technology that should be ready for fielding by “sometime early next year,” Locke said.

“It reduces the green glow; there's a much crisper picture that will allow us to avoid the disorientation with the green glow,” he said.

“Generically what happens with the older-style helmet, when you want to dim it, you turn it down and there is still a back plane that glows and that causes the green glow,” said Rear Adm. Dale Horan, director of the F-35C Fleet Integration Office.

With the new helmet using OLED, “when you want it to work, you turn it on and raise to the level you need, so when it's not working — when you don't need it — it's off. So it's not creating that background glow,” Horan added.

“From my perspective, there have been a lot of rumors and concerns and issues; they tend to sound insurmountable when you first talk about them,” Horan said. “But when you get sailors out there that want to solve the problem and industry that wants to participate and a country that says 'we need this aircraft,' you tend to solve problems.”