The F-35 is the most expensive weapons program in the history of the Pentagon, with a price tag of $396... 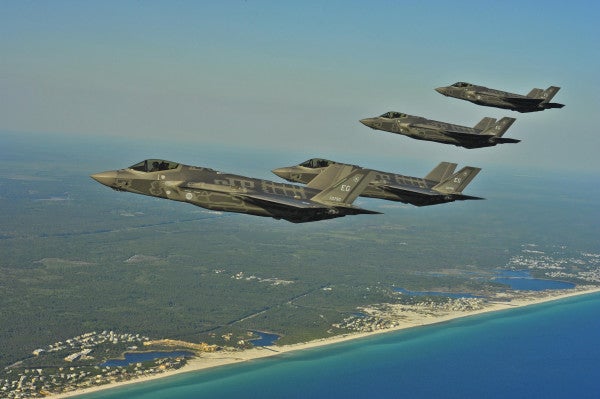 The F-35 is the most expensive weapons program in the history of the Pentagon, with a price tag of $396 billion so far and climbing. This would be a tremendous expense even for a flawless plane, but endless cost overruns and mechanical problems show it is anything but.

The fiscal year 2015 defense appropriations bill is moving through the Senate this week, and it continues funding and procurement of the chronically troubled program, despite mounting criticism of its spiraling costs and mediocre performance. It is far from the only controversial program, even if it is by far the biggest.

Here’s a look at some of the appropriations from Tuesday’s markup that are raising questions, yet still cost less than the F-35:

1. Green Machines: The military, as might be expected, burns a lot of fuel, spending over $20 billion a year on various hydrocarbons. Because of bulk purchasing, it typically spends $2.50 to $3.00 per gallon, not a bad deal compared to what your average driver has to pay. But the Navy and Air Forces biofuels program makes that gas bill seem tame in comparison. The Navy paid $26 a gallon for what is essentially distilled algae, while the Air Force’s green jet fuel is even more expensive at $56. The Navy plans to generate half its energy from renewable sources by 2020.

Secretary of the Navy Ray Mabus has argued that biofuels are important to national security because threats of foreign instability could cause oil shocks and price spikes. He compared the program to the switch from coal to oil in the 1890s, even though it was very expensive at first. Considering North America is rapidly becoming an energy powerhouse, shocks that would drive costs about $56 a gallon, or even $26, seems very unlikely for the foreseeable future.

2. Iron Dome on the U.S. Dime: As Palestine and Israel commence yet another round of their bi-annual mutual bombardments, a stand-out star of the conflict has been the Iron Dome anti-missile system, which has been shooting down Palestinian rockets with a high degree of success, dramatically limiting rocket impacts in heavily populated areas in Israel.

With the interceptors at over $50,000 a pop, used against Katyusha-style rockets that typically cost $5 to $10 dollars, this protection does not come cheap. But Israel only picks up part of the tab, because the United States plans to spend $351 million next year on the program as part of the $626 million we give Israel for missile defense. That is over $600 per Israeli citizen.

Israel has long been a traditional ally facing intractable instability, but it is also a highly industrialized, wealthy country with military spending per capita second in the world behind the United States. With chronic deficits and budget cuts at home, many are asking that Israel defend its own borders when it clearly has the means.

3. The Black Budget: Reading the defense appropriations bill, you will come across many line items simply labeled “classified,” or have designations that are vague at best. Much of what the Pentagon does is secret for security reasons, but the scale of this spending is huge. The proposed budget allocates $58.7 billion dollars for classified programs, ranging from Special Forces operations to a rumored new bomber.

Secret weapons systems and covert operations are nothing new for the military. But this number accounts for more than 10% of the baseline budget, and is by definition not subject to public scrutiny. Even the documents released by Edward Snowden, which included files on the Pentagon’s classified “black budget” programs, often raised more questions than they answered.

4. Tobacco discounts: As anyone who ever deployed knows, Big Tobacco has no better friend than the U.S. military. Thirty-two percent of military personnel smoke, compared to 18% of the civilian population. This number doesn't even include everyone who dips or chews tobacco.

The military used to issue cigarettes with K rations as late as 1975. Now, on post, tobacco is typically sold at a 5% discount compared to the prevailing prices in the area, though in some stores, the discount can be as high as 20%.

This discount may or may not be on the chopping block. The Navy’s plan to drop tobacco from its stores drew criticism from some lawmakers. “Having spent time around Marines and sailors through multiple deployments, I believe there are far more immediate priorities for the Navy and the Marine Corps, all of which require your leadership and attention,” Republican Rep. Duncan Hunter of California told Mabus. Tobacco use results in $1.6 billion in health care costs a year, according to the DoD.

5. Fighting… Rhinoceros Beetles: Included in the defense spending bill is a provision requiring Secretary of Defense Chuck Hagel to come up with a plan to eradicate the coconut rhinoceros beetle, an invasive species that has spread to Hawaii. Democratic Rep. Colleen Hanabusa blames the DoD for the problem. “The coconut rhinoceros beetle is an invasive species that can cause millions of dollars of damage to property. The beetle was likely introduced to Guam via military shipments from Indonesia and the beetle has been introduced to Hawaii through military shipments from Guam,” according to her statement on the bill. DoD has allocated $144 million this year for overall invasive species management.

For an organization with a global mission overseeing everything from aircraft carriers to K-12 schools, saddling it with wildlife management is the sort of pork-barrel provisions defense appropriations are already notorious for.