The A-10 “Warthog” once again has found itself in the retirement crosshairs. Yet again, the main support for its retirement... 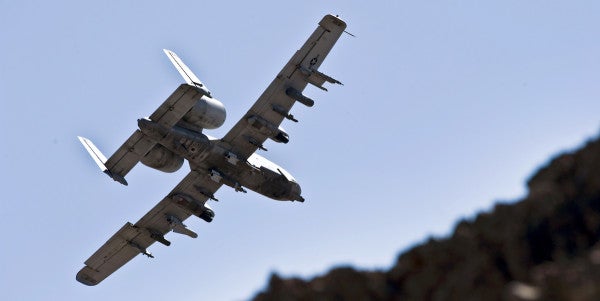 The A-10 “Warthog” once again has found itself in the retirement crosshairs. Yet again, the main support for its retirement comes from the Air Force and proponents of the F-35 Joint Strike Fighter program. Last week, Congress again moved to protect the A-10 from the boneyard, at least for the time being. But the continued struggle over the A-10’s future is about more than the plane itself; the arguments to trash the A-10 highlight a larger problem with the Air Force’s institutional self image as a service that projects air power strategically to win wars, rather than principally supporting forces on the ground.

The Air Force’s institutional resistance regarding the close air support mission and the A-10 is not a recent phenomenon. In the early 1970s, the Air Force viewed the Army’s use of attack helicopters, like the AH-1 Cobra in Vietnam, as infringing upon the 1948 Key West Agreement, a document that determined which types of air assets would be controlled by each of the four branches. Even though further memorandums and agreements had given the Army purview to use helicopters in a fire support role, the Air Force thought the AH-56 Cheyenne, a new helicopter being developed by the Army at the time, was infringing on the Air Force’s sole control of the tactical close air support mission. The Air Force advocated for its experimental A-X attack aircraft program to fulfill the close air support role; but when the Cheyenne was canceled due to technical issues, the Air Force tried to back away from the A-X program. Under pressure from Congress, the Air Force reluctantly continued with A-X and eventually put the A-10 into production.

During its first years in service, the A-10 was not well liked by many in the Air Force. The plane, affectionately dubbed the “Warthog” by those who flew it, was neither a long-range strategic bomber, nor a speedy interceptor. It was designed to chew up Soviet tank formations with its 30-millimeter Avenger cannon, not conduct the strategic strikes air power purists had championed since the 1920s. The plane remained unproven and unpopular. Then the 1991 Gulf War broke out. The legendary reputation of the Warthogs was born here, with A-10s accounting for half of the Iraqi armor destroyed from the air. The A-10 flew over 8,000 sorties in the Gulf, making it one of the most reliable and efficient aircraft of the war. Warthogs and their pilots would repeat this level of success in the Balkans, Afghanistan, and again in Iraq. The sight of an A-10 overhead brought relief to any troops in heavy enemy contact.

Two primary arguments against the A-10 dictate that the plane is obsolete and not survivable on today’s battlefield, where air-defense systems and shoulder-launched missiles abound. It’s true that the original Warthogs lacked the capabilities to find targets at night or in adverse weather, but today’s A-10C has digital avionics and targeting sensors that greatly enhance its capabilities. And the idea that the A-10 is not survivable is laughable, given the aircraft’s original task of killing Soviet tanks; the Warthogs would have faced a plethora of Warsaw Pact anti-aircraft gun and missile systems in performing its role.

But the current reasoning behind retiring the A-10 stems from budgetary concerns; the Air Force told Congress that they need Air Force maintenance personnel currently assigned to A-10 squadrons to work on the F-35 program. Air Force leadership claims that the F-35 can perform the A-10’s role, even though the F-35 will not even be fully operational until 2019. The debate over whether the F-35 will be a good aircraft still rages, but what is fundamentally clear is this: The F-35 will never be a great replacement for the A-10.

The F-35 is not designed to excel at flying the same low altitudes and low airspeeds that a good close air support aircraft needs to do. Due to its stealth-focused design, the F-35 cannot carry the same the large and varied weapons load needed for the close air support mission. And that same stealth technology will provide little protection from unguided enemy weapons fire close to the ground; where the close air support mission lives. The F-35 doesn’t have the long loiter time that enables an A-10 to stay over a battlefield for up to two hours, and it’s internal cannon, when it actually is mounted, will barely hold enough rounds for more than single strafing pass.

But the biggest reason the A-10 should survive has little to do with the A-10, or the F-35, or any other aircraft. What’s important is the mission the A-10 represents, and the two important groups of warfighters involved: pilots and ground troops. In arguing for the A-10’s demise; some commentators have greatly underestimated the difficulty of the close air support mission, selling it as simple process of sending some coordinates to a waiting aircraft and waiting for the boom. This mentality marginalizes the complex task that joint terminal attack controllers, combat controllers, and any other personnel who find themselves directing air assets onto a target. These troops must talk an aircraft onto a target, help the pilot identify friendly and enemy positions, route that aircraft around threats and obstacles, determine what munitions are suitable to employ, and assess the damage of airstrikes. All why moving and engaging in combat on the infantry battlefield. Consequently, the troops on the ground like working with A-10 pilots the best, because those pilots understand and train for the mission. Warthog pilots understand that they may have to drop ordnance in close proximity to troops in contact in order to destroy the most significant threats; such as the Battle of Takur Ghar, where Army Rangers needed bombs dropped a mere 50 meters from their lines. F-35 pilots will be flying a multirole aircraft; jack of all trades, master of none. They simply won’t be able to train as extensively for close air support, due to the myriad of other missions the F-35 is expected to perform. Reassigning the A-10 pilot community to different aircraft dilutes their knowledge and experience flying in support of ground forces.

If the Air Force had a new ground attack plane in development, or the F-35 was better suited to the mission; there wouldn’t be so much resistance to scrapping the A-10. But that isn’t the case; the Air Force, for whatever reason they claim, wants to leave A-10, and by extension any real commitment to the close air support mission, in the dust. But that mission will always be important; whether fighting ISIS in the Middle East or shredding tanks in some future conventional war, troops on the ground will always find themselves needing close air support.

It’s time for the Air Force to realize that they have the responsibility to provide it.