An Inside Look At The Carrier Launching Strikes Against ISIS

As Iraqi forces fight to turn the tide against ISIS militants, American airpower provides support from the air. And a... 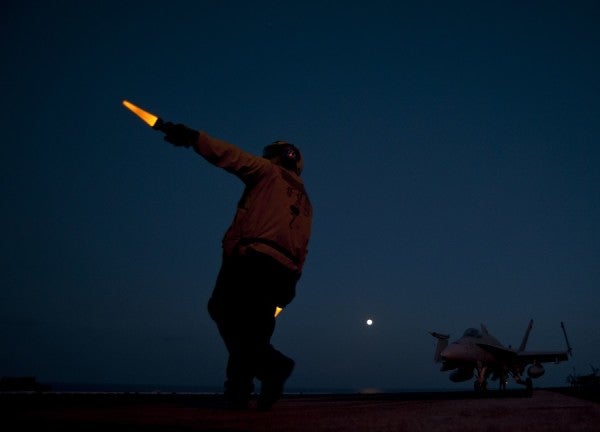 As Iraqi forces fight to turn the tide against ISIS militants, American airpower provides support from the air. And a significant portion of that power is provided by Navy combat aircraft.

In a recent report in the New York Times, Times’ journalists went aboard the USS Carl Vinson to report on that effort. The Times details how Navy F/A-18 Hornets fly more than a dozen sorties a day against ISIS targets. In all, as much a 25% of the 1,200 total combat sorties flown against ISIS involve Naval air assets.

The strikes are guided indirectly; Iraqi troops work with U.S. special operations personnel at Iraqi command centers acting as controllers, who help pilots hone in on targets. Navy pilots must make the six-hour round trip journey, often refueling in midair three or more times. Cmdr. Eric Doyle, an F/A-18 pilot, told the New York Times that the nature of the strike operations can change rapidly: “It can be pretty boring, then all of sudden it gets heated and you've got a whole lot of work to do in 120 seconds.”