The U.S. military is suddenly getting back into the hot air-intercept business again with a vengeance — and as we... 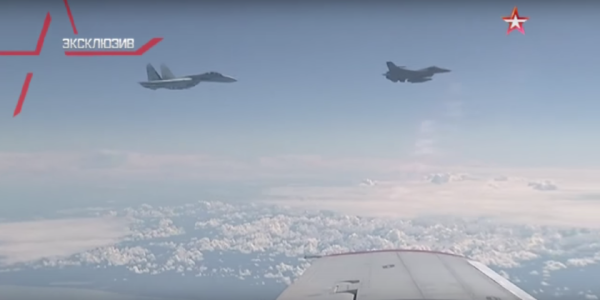 The U.S. military is suddenly getting back into the hot air-intercept business again with a vengeance — and as we all wring our hands over the geopolitical implications, it’s as good a time as any to remember that even in times of relative calm, fighter jockeys are always running danger-close interdictions, flirting with mechanical disaster and global crisis. Case in point: this berserker video of a NATO F-16 buzzing the Russian defense minister’s jet and being politely told to piss off by an SU-27 Flanker.

The “exclusive” footage appears to be from Defense Minister Sergey Shoigu’s Tuesday trip to Kaliningrad, a Russian enclave on the Baltic Sea surrounded by NATO member nations. The video comes from the Russian Defense Ministry’s TV station Zvedza — yes, their military has a TV station, and yes, it’s a little slicker than the Pentagon Channel — and it shows what pilots probably consider a non-event, and civvies file away as a “HOLY SHIT WHAT THE EVERLASTING FUCK” moment.

The Aviationist’s David Cenciotti parses what you just saw:

According to the first reports and analysis of the footage, the F-16 (most probably a Polish Air Force Block 52+ aircraft supporting the NATO Baltic Air Policing mission from Lithuania – hence, armed) shadowed the Tu-154 aircraft (most probably the aircraft with registration RA-85686) carrying the defense minister en route to the Russian exclave of Kaliningrad when one armed Russian Su-27 Flanker escorting Shoigu’s plane maneuvered towards the NATO aircraft, forcing it to move farther.

The F-16 eventually meandered away, after giving the Russian aircraft a bit of how’s-your-father. As Cenciotti puts it, “Similar close encounters occur quite frequently in the Baltic region.” He’s not wrong: Also on Tuesday, U.S. commanders blasted a Russian SU-27 crew for “erratically” buzzing an American RC-135 recon aircraft in the same patch of sky.

But how many similar encounters get the sensational propaganda treatment that this one did? Zvezda interviewed a Russian “expert” who called the probably Polish F-16 driver an American “air pirate.”

“The American fighter broke all norms and arrangements and actually behaved like an air pirate,” the “expert,” Aleksandr Zhilin, told the Russian military TV station. “Thank God that the Armed Forces of the Russian Federation are headed by a sensible person, and thank God that our fighter acted beyond all praise.”

He added: “The Americans completely trampled on international law and today behave simply like robbers.”

Previously, Zhilin suggested that the U.S. orchestrated the 2015 Charlie Hebdo terrorist attacks in Paris, because something something Russian sanctions.

I mean, I’ve got nothing to say to that. I’ll just let Fred Thompson do the talking for me.