If there’s one thing the Pentagon loves, it’s improving the U.S. armed forces without paying for it. On June 7th,... 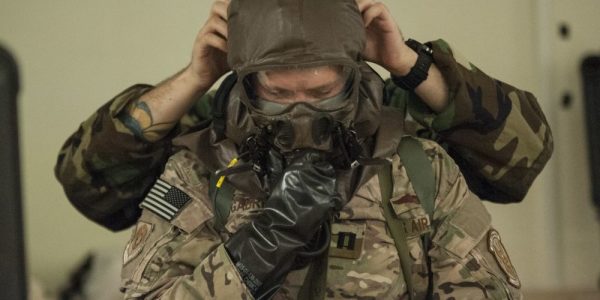 If there’s one thing the Pentagon loves, it’s improving the U.S. armed forces without paying for it.

On June 7th, Stars and Stripes reported that a handful of entrepreneurial airmen in the life-support shop at Japan’s Yokota Air Base whipped up an ingenious invention that could potentially save the Air Force millions: a 3D-printed modification to the M50 gas mask that attaches to the standard flight helmet.

As of July 2016, Air Force manual 11-301 Vol. 2 stipulates a specifically-designed aerial gas mask be used to meet chemical/biological/radiological (CBRN) requirements for aircrew. But C-130 Hercules pilot Capt. Matthew Kohl argued to Stars & Stripes that a solution was needed due to the high cost and low reliability of the current Aircrew Eye/Respiratory Protection System (AERP), which is “expensive, heavy and fault-prone with long waits for replacement parts.” Their modification, reportedly produced on an unidentified 3D printer, could potentially deliver up to $8 million in savings.

It is obviously admirable that the life-support shop saw a problem and proposed a solution; it’s impressive for the same reasons we love stories about plucky cadets making bulletproof goo. But before gushing over the amorphous cost savings of $8 million, some scrutiny from me, a salty ex-senior airman with no background in aerospace engineering, is probably for the best.

Aircraft life-support equipment is engineered to meet very specific standards to survive the stresses of flight. Masks flown at altitude are designed and tested to very specific tolerances for factors like protection levels and filter requirements known as Pressure Breathing for Altitude (PBA)/Pressure Breathing for Gravity (PBG). The average M50 filter is designed to stop fourth-generation nerve agents, like the Novichok nerve agent used in that insane UK spy attack in March, for roughly 15 minutes.

But when both of these requirements are combined, the unintended consequences could be catastrophic. These fourth-generation nerve agents were, in turn, designed to defeat the standard-issue protective gear used by U.S. forces during the Vietnam era — and this means the addition of a 3D-printed adapter could create an unforeseen weak point in the M50 system that was designed to counter these agents.

In addition, the permeability of the plastics used by the unnamed 3D printer are a point of concern as they likely haven’t been vetted by a chemical engineer. The modified gas mask may hold up against OC pepper spray, but it is doubtful that the life support team could test the new system against a highly controlled chemical like VX or Novichok.

Besides those questions, the AE/RPS is complex in part because it is designed to take on a 100% oxygen flow. If an aircraft is flying in an unpressurized environment above 10,000 feet, that oxygen would have to pump through this gas mask filter that, with charcoal among the activated components, raises questions about the impact of altitude on the jury-rigged seal — namely, is it a fire risk?

To be clear, nobody’s pretending this mask is going into circulation immediately. Lt. Col. Richard F. McElhaney, Jr., 374th Operations Support Squadron commander released a statement to Task & Purpose that the new M50 gas mask modification “is still in testing to ensure that it's practical and durable,” a “first step in continuous process improvement.” And in the popular Facebook group Air Force amn/nco/snco forum, one of the designers acknowledged that the system required significant improvement when asked about the mix of oxygen in charcoal mentioned above.

Beyond the possible additional costs in research, development and certification of this airman designed system, they may actually end up duplicating the efforts that the U.S. military has put into finding a successor to the aging AE/RPS. The U.S. military already fields the Joint Service Aircrew Mask–Rotary Wing (MPU-5), which the M-50 modified gas mask is attempting to emulate. But the U.S. Air Force is also currently testing the Joint Service Aircrew Mask for Strategic Aircraft, or JSAM SA XM-69, for use in non-rotary wing aircraft.

Although there is no public timetable on the XM-69’s testing and possible deployment, the unique technical requirements and high stakes of the project undoubtedly are part of the equation. Once the new system begins to deploy, the need for modified aircrew gas mask systems will fade — assuming the modified mask is certified in a timely manner.

Of course, none of this is an indictment of the attempt to find a novel solution to an expensive and pervasive problem. “We hope this innovation will spark continued testing on the concept for AF-wide efficiency and cost savings,” McElhaney told Task & Purpose. “Our Airmen's ingenuity and motivation is absolutely amazing, and we hope the current momentum continues to inspire others to look for ways to increase efficiency.”

But this also isn’t the first time that an obvious (and cheap) solution to a glaring problem turned out to be more hype than a long-term solution. Just ask the U.S. Army soldiers who built the IronMan machine gun support system in the field, only for it to be found redundant and inferior to products already available to Pentagon. But when items that have such a massive impact on operations are proposed, some caution and evaluation should temper overzealous praise.

The world of government contracting is complex and slow moving, prone to cost overruns and fraud, waste and abuse. But certain systems are so complex that there is usually not a good, simple, and cheap alternative to the expensive solution of the procurement process. As much as we want to see U.S. service members finding solutions to problems and fixing them, sometimes the best move is to idle the throttle a bit before flying into unknown skies.