The Path-Breaking Apache Helicopter Helmet Is Getting A Major Upgrade

Some of the most talented pilots in the U.S. armed forces are getting a major helmet upgrade. Contracting firm Defense... 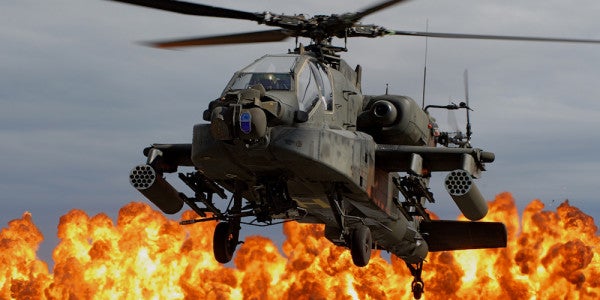 Some of the most talented pilots in the U.S. armed forces are getting a major helmet upgrade. Contracting firm Defense Corporate on July 24 announced on Soldier System a $13 million contract with the Army to produce a new Apache Aviator Integrated Helmet (AAIH), a piece of hardware critical to the legendary AH-64 Apache helicopter.

The face-enveloping new helmet — which appears to be built on the HGU-56/P rotary wing helmet system that Gentex initially designed support the Army Air Soldier Program, and gives me the frickin’ creeps — will offer “improved safety features and comfort that provides situational awareness and targeting information,” according to the company. The new helmet also includes updates meant to seamlessly integrate with the next-generation AH-64E that Boeing will sell to 15 countries over the coming years.

This is no insignificant upgrade, even if it sounds like one. The Apache’s heads-up display was the first used by the Department of Defense in 1985, beginning with an Integrated Helmet and Display Sighting System that fed targeting information and infrared imaging directly into a helmet-mounted screen.

According to a 1988 Army Aeromedical Research Lab report on the new system, the Pentagon was most impressed by the capability for “an IR imaging sensor, mounted on the nose of the aircraft, to be slaved to the aviators head movements” — a capability quickly applied to the attack helo’s 30mm automatic M230 chain gun.

But annihilating enemies with a head-responsive chain gun is far from the helmet’s most important function. Of all the aircraft in the Pentagon’s inventory, the Apache may be among the most difficult to fly. In his 2009 book Apache: Inside the Cockpit of the World’s Most Deadly Fighting Machine, former British Army Air Corps pilot Ed Macy described the mental and physical gymnastics required to squeeze every ounce of deadly power out of the attack helo, via Air & Space/Smithsonian:

Flying an Apache almost always meant both hands and feet doing four different things at once. Even our eyes had to learn how to work independently of each other. A monocle sat permanently over our right iris. A dozen different instrument readings from around the cockpit were projected into it. At the flick of a button, a range of other images could also be superimposed underneath the green glow of the instrument symbology, replicating the TADS’ or PNVS’ camera images and the Longbow Radars’ targets.

The monocle left the pilot’s left eye free to look outside the cockpit, saving him the few seconds that it took to look down at the instruments and then up again…. New pilots suffered terrible headaches as the left and right eye competed for dominance. They started within minutes, long before take-off…. As the eyes adjusted over the following weeks and months the headaches took longer to set in. It was a year before mine disappeared altogether…. I once filmed my face during a sortie with a video camera as an experiment. My eyes whirled independently of each other throughout, like a man possessed.

Gentex better be up to the task: The company’s new deal follows a $12.7 million, two-year deal Army contract with Elbit Systems to supply the AAIH. And with the Army’s Apache Program Management Office currently collaborating with Raytheon on a rotary aircraft laser system, Gentex should start planning on a helmet capable of supporting the laser headbanging that is the future of modern Apache warfare.