The Pararescueman Who Saved 19 Lives Under Enemy Fire

When it comes to rescuing soldiers and civilians from the air, Senior Master Sgt. Christopher “Doug” Widener has seen it... 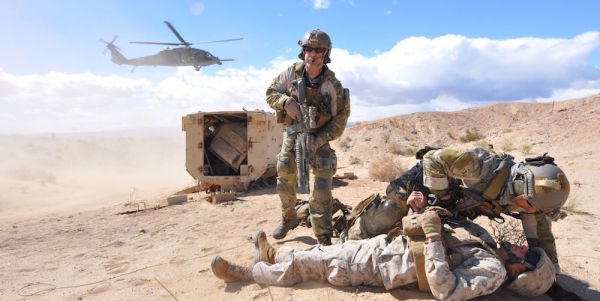 When it comes to rescuing soldiers and civilians from the air, Senior Master Sgt. Christopher “Doug” Widener has seen it all throughout his 25 years in the rescue community. The pararescueman has rescued trapped climbers off knife-thin ridges in Alaska and completed four deployments to Afghanistan, earning a Distinguished Flying Cross with Valor for a string of near-nonstop rescues over five days in 2010.

After a year of uninspiring work as a civilian following high school, Widener enlisted in the Air Force in the late 1980s with the intention of becoming a pilot. But during his experience as an HH-60 Pave Hawk helicopter mechanic in Las Vegas, Widener became enamored with the lifestyle of the pararescuemen, or PJs.

“What I saw with this group of guys, the PJs, I was very attracted to the way they took care of each other, the way they related to each other, their mentality and their attitude on life,” Widener said in an an Air Force news release. “It looked like a really admirable way to serve your country.”

Following two and a half years of grueling training, Widener survived reported washout rates of 75% to finally fulfill his dream of becoming a PJ. Widener soon set his sights on the Air National Guard and Alaska’s 212th Rescue Squadron, where diverse terrain provides pararescuemen the opportunity to put all their specialized skills to use far more regularly than anywhere else.

Widener had never stepped foot in Alaska before he switched to the Air National Guard and joined the 212th. In the next 14 years, he deployed to Afghanistan four times — in 2003, 2008, 2010, and 2012 — but Alaska’s vast size and terrain meant his operational tempo never slowed down even when the deployments ended. “It’s as if you’re always deployed with our mission,” Widener said in the Air Force release.

In 2005, Widener rescued a climber above 17,000 feet on Denali, the highest peak in North America. He went back the next year as part of a four-person climbing patrol. In 2011, Widener found himself at the end of a rope in winds of 40-50 knots straddling a knife-edge ridge 11,000 feet high on Mount Hayes.

“John Romspert's got me on this belay, and I run out on this ridge, and there's thousands of feet on either side, and I snatched these two guys up and brought them back inside,” recalled Widener.

In November 2010, Widener earned the second-highest medal a pararescueman can receive, when he served in support of Operation Bulldog Bite in Afghanistan. Flying 25 missions during a span of just five days, Widener and two other squadron mates, Master Sgt. Brandon Stuemke and Staff Sgt. Aaron Parcha, retrieved 49 U.S. and coalition personnel, according to the Air Force. They rescued 19 of those wounded troops through the highly dangerous method of insertion and extraction via their HH-60 helicopter hoist cable system, usually under heavy fire. In one instance, they treated a fellow pararescueman with a gunshot wound while under enemy fire.

His last deployment to Afghanistan, as his unit’s senior enlisted PJ, was similarly eventful. “Over a four-month period, it was something like 305 saves and 280 missions,” said Widener in the Air Force release. “It was a very busy, high-intensity, fast-paced time in the Helmund province. That whole deployment was one of the highlights of my career.”

Although his April retirement from the military means he’ll have more time with his wife and two young daughters, Widener will continue to place himself in harm’s way to rescue others in his new career with the Anchorage Fire Department.

“The questions I've often been asked is, 'How can you do what you do and be a father? Aren't you scared of something happening to you, and now that you have kids, shouldn't you tone it down a bit?'” Widener told the Air Force. “My response to that has always been, ‘No.’ Period. My daughters would want me to live my life to the fullest. In order for me to be a great husband and father, I have to live to my fullest potential. For me to back away from that out of fear or out of reservations, that's not fulfilling the potential of my life.”