Soldiers with the Massachusetts Army National Guard discovered and saved an elderly woman lost in the woods while on a... 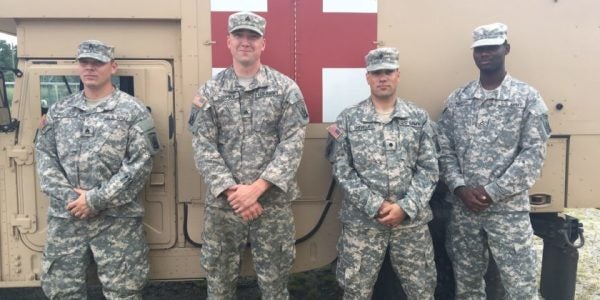 Soldiers with the Massachusetts Army National Guard discovered and saved an elderly woman lost in the woods while on a routine training operation in New Jersey on July 25.

The men were in the woods looking for a suitable place to conduct recovery training, when they happened upon a Cadillac in the road, according to a military release.

The soldiers were initially suspicious of the vehicle, stuck in the soft sand along a wooden tank trail. It had all of its doors open and a sunshade in the windshield. They honked their horn several times.

Staff Sgt. Dana Francis and Sgt. Tommy Coppola, members of G Co. 186th Brigade Support Battalion who work as civilian firefighters, approached the vehicle and found an 87-year-old woman slumped in the back seat and unresponsive.

The men went to a larger training area and sought the help of two medics, Spc. John Shively and Pfc. Aaron Amardey-Wellington, then returned to the woman.

“I ran up to the vehicle and found she was just waking up,” Coppola said. “We were thinking the worst when we first started.”

Once she was in the ambulance, the woman revealed she had been stuck on the road since Saturday morning, two days before, and had only had rainwater to drink.

She is reportedly recovering well.