“Everyday carry” is supposed to be just that: the stuff you always need, or wish you had, to tackle whatever... 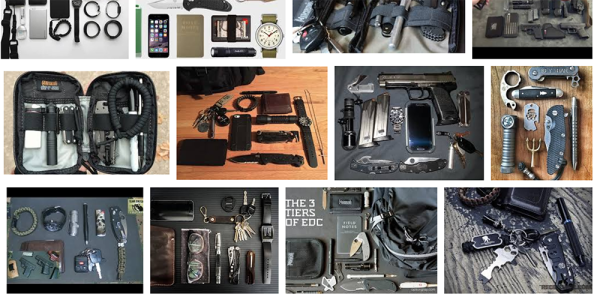 “Everyday carry” is supposed to be just that: the stuff you always need, or wish you had, to tackle whatever life throws at you on a daily basis. Sure, loading up on EDC goodies can be about looking tacticool if you really want — a consumerist orgasm of virtue-signaling with “pieces of man-flair,” as T&P; contributor Francis Horton put it in his recent coverage of sometime White House adviser and all-time military wannabe Sebastian Gorka's EDC-themed cry for help. But for the rest of us, practicality might actually be a primary concern.

If you wanna load down your pockets and go-bag with flashy gedunk that advertises your superior vigilance, knock yourself out. But some T&P; readers — you know, actual vets — read our Gorka sendup and felt compelled to share what's in their everyday carry. Get ready to compare notes:

Joe Plenzler, a Marine vet who works for the American Legion, is ready to do battle in any boardroom — in close quarters, if necessary, as evinced by the breath-improving gum. Also hat tip to him for inspiring the flood of photos we received.

Aaron Leong, a Naval Academy Marine, just can't quit the tac pouches and government-issue inkstick. We all have our little vices.

True to form for a company grade officer, the Iron Capt. balances his electronics with a moto ID holder to house his bennies and discount cards. He saves money on snacks by hitting up Costco for protein bars. Lest you think he doesn't rate all those corporate discounts, note the SmarTrip card marking him as a DC public transportation victim commuter. He's earned what he has through his suffering.

Wallet also has phone charger, so I guess I’m a *little* prepared. But most of my ready kit is in my car. pic.twitter.com/3F0Je2HjgI

I don't know if George Stankow's Army service led him to buy a wallet with a built-in phone charger. All I know is he carries the best challenge coin I've seen in some time.

Doggy poo bag, doggy hard treats, doggy soft treats, cat treats (which, if you have a dog, you know are like candy to puppers). Not sure what this former Army officer has done or seen, but always being ready to win over a random doggo seems like a good everyday skill to me.

The only way this Army officer could enjoy his morning latte more is if Starbucks put it in his Camelbak before a PT run.

Some gunnies want the finer things in life, like high-quality earbuds, premium lip balm, and even a bespoke “Nationals” DC Metro card. Whatever it takes to keep a gunny from going all gunny on me on the train.

This former Marine never knows when she's going to need extra-strength Excedrin. Probably right after some d-bag on the train asks about her reading material, or a coworker tells her to “smile more.”

What, no rocket pack? No shackled Han Solo? Screw “mediocre Jedi”: You're not much of a bounty hunter, even.

Notebook- for writing “as a veteran…” as many times as possible.
Pen- see above
Mt Dew- drink, spit, piss, repeat
Dip- are you really a veteran w/o dip?
Back up can of dip
Not pictured-third can of dip pic.twitter.com/DKPN5K9mZQ

My only issues with this setup are (1) not enough dip and (2) you should really use Coke bottles for your spit and piss, so you can never mix them up with that sweet sweet Mountain Dew.

Got more photos of real vets' EDC? Drop them in the comments below.