It is a matter of scientific certainty that the American military churns out some of the toughest warriors in the... 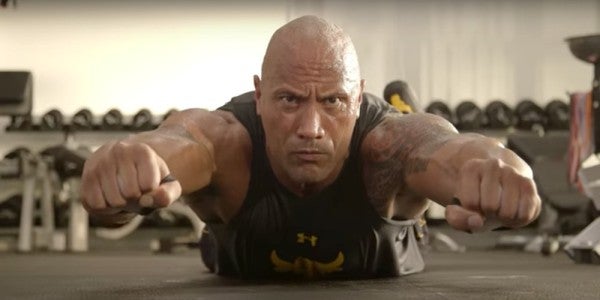 It is a matter of scientific certainty that the American military churns out some of the toughest warriors in the history of mankind. The training programs for elite units like the Navy SEALs are enough to liquefy the insides of the average civilian. In the right place, under the right circumstance, the American service member can be the deadliest creature on the planet.

But if you’re looking for that extra layer of muscle for added strength — or just a strong dose of intimidation — we recommend taking a page from Dwayne “The Rock” Johnson’s playbook. Sure, he doesn’t have the same training or instincts of a SEAL, but let’s admit it: When you look up the word “ripped” in the dictionary, Johnson’s portrait is there, eyebrow cocked and ready to flex.

On Tuesday, the brick shithouse posted an intimate four-minute supercut of his regular workout routine to his YouTube channel. Johnson’s been sharing his incredible workout routines with legions of fans for months now, an intimate look at exactly what it takes for the Rock to remain rock solid.

Of course, becoming The Rock doesn’t just require a metric fuck-ton of weights. Consider the diet for his role in “Hercules,” which he shared with BodyBuilder.com in January: “a bunch of egg whites, filet mignon, chicken, fish, oatmeal, broccoli, asparagus, a baked potato, cream of rice, salad and complex carbs. All of this measured and weighed.” For 22 weeks. Eating seven times a day.

Why yes, I can smell what the Rock is cooking, and it’s complex carbs.