Finally, The Futuristic Condom You Never Knew You Needed 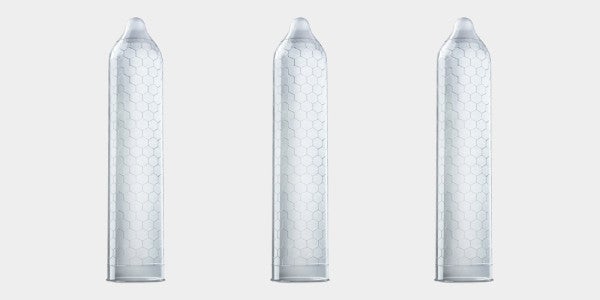 Now, the HEX reengineered condom isn’t really “news,” considering how the Swedish “intimate lifestyle” company LELO dropped this ultra-thin, super-flexible tallywhacker-wrapper on the world nine months ago, but think of it this way: In those nine months you didn’t know about the HEX, you could have conceived and witnessed the birth of your very own living, breathing, defecating child. Don’t make the same mistake twice.

“But what about a Trojan or Magnum?!” you may yell, shaking your fists at the inescapable burdens of fatherhood that cause your genitals to retract into your torso faster than a shell from an electromagnetic railgun. Fuck that noise: The HEX wasn’t just designed to keep juices where they belong, but to maximize sensation and pleasure for you, the sex-haver, without getting in the way while you’re doing sexy sex stuff.

Speaking of sexy sex stuff, the HEX’s sexy sex-features include:

Guys, this condom is so sciency that it uses honeycombs, the sexiest shape found in nature: “There’s a reason why honeycombs are the shape they are. Nature knows it, dragonflies know it, Fibonacci knew it, and we know it,” claims LELO. “Hexagons are strong, symmetrical, even, and tessellates perfectly — they’re nature’s go-to shape for strength and lightness.” Also, you can’t spell “hexagons” without S-E-X (and also a G and some other letters, but mainly those three).

Anyway, you can pick up a 36-pack of these futuristic bad boys for just $34.90, which is a perfectly acceptable price to pay to feel like Neil Armstrong thrusting into the great unknown from his science-built perch in the Apollo 11. Hell, that’s enough to buy a whole thing of Vaseline petroleum jelly — or, about one giant pack of diapers.