3 Challenges Only Tall People Will Encounter In The Gym

At 6 feet, 5 inches tall, I have run into my fair share of height-related inconveniences. For example, the ever-shrinking... 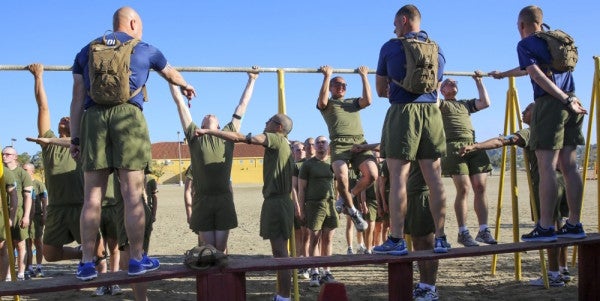 At 6 feet, 5 inches tall, I have run into my fair share of height-related inconveniences. For example, the ever-shrinking distance between rows on an airplane has made even short flights a grueling experience. I also have roughly the same odds of finding clothes that fit me as the Cleveland Browns have of winning a football game. And ceiling fans are a serious hazard to my health. But none of these frustrations compare to that which I, or any tall guy or gal, experience at the gym.

None of this is any excuse to fail your next physical fitness test or not get as big as the next guy; it just means that as a tall guy or gal you’ll have to do more work than your shorter counterparts. What are the most infuriating aspects of staying fit for we, the vertically unchallenged? Here are the top three.

Physics is a real son-of-a-bitch when it comes to tall service members and calisthenics. Bodyweight exercises become more difficult the taller you get, because muscle power tends to increase linearly, while mass increases exponentially. Basically, the bigger you are, the less efficient your power output is. Absolute power does increase with your size (obviously), but it does so with diminishing returns. For those in the military, this is the one area of fitness that can literally determine if you get that next promotion since it’s the main component of every branch’s physical fitness test. The only solution: Exercise more.

Push-ups, specifically, are the bane of every tall service member due to our longer arms, which in turn requires more physical exertion to travel the greater distance per repetition. A soldier can complete 50 repetitions faster than a taller soldier, because it literally takes more time for the taller soldier to complete each repetition. Again, this is due to the greater distance travelled. If you only have two minutes, that means a shorter service member will always be able to complete more repetitions than someone taller who has the same degree of muscular strength and endurance.

Ask any tall Marine, and they’ll tell you pull-ups suck for them, too. Once again, it all comes down to the longer arms and greater distance traveled. Physics will tell you a shorter lever is more efficient than a long one, and efficiency is pretty damn important when it comes to muscular endurance. And don’t even get me started on how us skyscrapers can usually grab the bars with both feet still flat on the ground. And no, that doesn’t make it easier; it’s a pain in the ass actually.

I don’t use the cables much, so I reached out to fellow tall guy Scott Whisler. He thinks cable machines are a real pain in the ass. “It's harder to use them because of the longer range of motion for exercises that require me to back up farther in order to keep tension on the cable,” he says. With longer arms comes the need for longer cables. Unfortunately, most gyms don’t accommodate that very specific need.

The positioning of the pulleys can also cause damage to the joints over time. All of those machines are engineered with generic human measurements in mind, so when a tall bro or broette steps into the cables, the angles are all off for the same movements everyone else is doing. This is part of the reason I avoid cables like the plague. At my altitude, it’s just asking for an overuse injury.

I’ve already covered the whole “greater distance” aspect ad nauseam, but it bears repeating when it comes to performing lifts. At its core, lifting weights is picking heavy things up and putting them back down, over and over again. Otherwise known as “doing work.” In physics, work is the product of force multiplied by distance. Tall folks have a greater range of motion and thus have to travel a further distance, resulting in doing more work with the same amount of weight lifted as a smaller guy. More work means they will tire out faster with fewer repetitions completed.

Physics being what they are, people of the tall variety also deal with benches that are too short, squat racks that always need adjusting, and going overhead with a bar isn’t always possible depending on ceiling height. Us lanky types even have to take what coaches say with a grain of salt, like, “Don’t let your knees go forward past your toes.”Yeah, roger that, coach…

But we have it made on the rower!

Outside of our statuesque good looks and natural sex appeal, we actually have a legitimate advantage in the gym when it comes to rowing. Due to our longer leavers, we can make longer strokes (there’s a joke in there somewhere…), which means a greater distance covered for each repetition. If all variables are the same for two individuals except for their height in a 2,000-meter sprint, the taller rower will always finish first. If you are an avid Crossfitter who attends group classes, you’ll notice that those beanstalk-looking dudes usually finish on the rower before everyone else. But don’t worry, you’ll catch up with them on, well, almost anything else you have next. Especially the damn pull-ups!