President Donald Trump has ordered more than 7,000 U.S. service members to the U.S.-Mexico border as part of Operation Faithful... 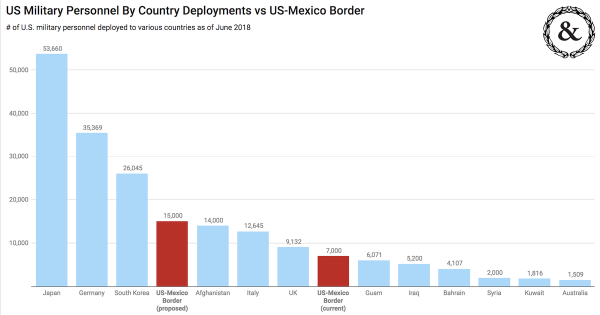 President Donald Trump has ordered more than 7,000 U.S. service members to the U.S.-Mexico border as part of Operation Faithful Patriot, a fresh deployment of active-duty troops to enhance border security. On Thursday, Trump stated that those troop levels could rise to 15,000 — more personnel than currently deployed to Afghanistan.

The fresh troop deployment — triggered by somewhat absurd panic over a caravan of Central American migrants still hundreds of miles from the nearest entry point into the United States — doesn't just represent a stark contrast to deployments that currently define the Global War on Terror. According to Pentagon data, a deployment of 15,000 service members would be rivaled only by U.S. troop deployments to Japan, Germany, and South Korea.

Think about that for a second: the new border force would constitute a deployment outstripped only by countries we've occupied after World War II and our main ally against the most likely instigator of World War II, North Korea.

There are a few caveats here, of course. The data provided in the Defense Manpower Data Center (DMDC), updated quarterly, reflects physical bodies in a given location at a given time rather than deployments as part of enduring missions like Operation Enduring Freedom in Afghanistan and Operation Inherent Resolve in Iraq and Syria. As a result, it's tricky to glean a completely accurate vision of U.S. troop deployments worldwide — which is fine, for obvious OPSEC reasons!

Still, sending this many troops to the border seems to compound a vision of this caravan as an “invading force” that requires a sizable border force to repel. Keep in mind that Trump recently told supporters that there are “criminals and unknown Middle Easterners” (read: terrorists) hiding in the caravan, a claim that has no basis in empirical fact (he even admitted as much).

Although the goal of Faithful Patriot may be to “harden our ports of entry” in border states, as Customs and Border Protection chief Kevin McAleenan recently stated, those U.S. troops deployed to the U.S.-Mexico border can't actually harden anything. The Posse Comitatus Act of 1878 prohibits military personnel from conducting law enforcement functions on U.S. soil, including physically detaining migrants.

And they can't even look across the border, as weird as that sounds.

The prospect of 15,000 troops on the border (many of them public affairs detachments for painfully obvious reasons) constitutes one of the larger modern deployments of U.S. military personnel in recent memory — for questionable reasons and little strategy contributing to a desired end state.

But then again, what else is a military deployment in the post-9/11 era?