645,000 Poppies, Each Representing A Fallen Service Member, On Display At The National Mall

This Memorial Day weekend, a temporary installation honoring the nation’s fallen service members dating back to World War I will... 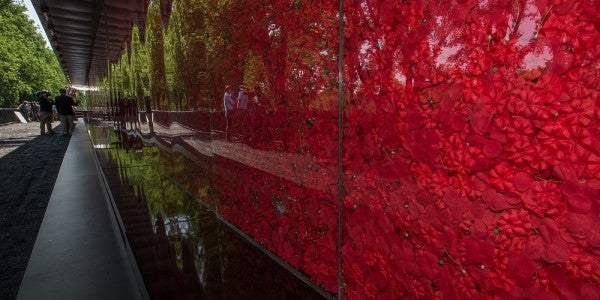 This Memorial Day weekend, a temporary installation honoring the nation’s fallen service members dating back to World War I will be on display at the National Mall in Washington.

The Poppy Memorial, located near the reflecting pool by the Lincoln Memorial, measures 133 feet in length and stands over 8 feet tall. A series of glass panels cover one side, and within are more than 645,000 artificial poppy flowers — each one representing a serviceman or woman who gave their lives in defense of the United States since 1915.

Created by USAA as part of their annual Memorial Day ceremony in 2016, the current memorial is a traveling exhibit, larger in scale, more more robust, and able to be set up outdoors. This year marks the first large public display of the memorial; it will be on the South side of the Lincoln Memorial from May 25 to May 27.

“Many are not necessarily aware of what the significance, or purpose, of Memorial Day,” Eric Engquist, USAA’s vice president of enterprise brand management and a former U.S. Army infantry officer and West Point graduate, told Task & Purpose. “The wall really does stand as a reminder of the price of freedom, that we all enjoy.”

On one side of the wall will be the multitude of poppies, and the other will feature a collection of facts and figures from U.S. conflicts dating back to World War I. There are interactive screens set up around the exhibit, which visitors can use to learn about the the individual service members memorialized on the Poppy Memorial.

The memorial poppies were donated by the American Legion and Veterans of Foreign Wars.

The significance of the poppies stems from Lt. Col. John McCrae’s World War I poem In Flanders Field. Since then, the poppy flower has been a symbol of remembrance for the fallen:

In Flanders fields the poppies blow

Between the crosses, row on row,

That mark our place; and in the sky

Scarce heard amid the guns below.

We are the Dead. Short days ago

Loved and were loved, and now we lie

Take up our quarrel with the foe:

To you from failing hands we throw

The torch; be yours to hold it high.

If ye break faith with us who die

We shall not sleep, though poppies grow

“This idea came about to kind of reframe the context around memorial day and bring awareness to the sacrifice of our servicemembers, and in particular, those who laid down their lives since World War I,” Engquist said. “We encourage people to take action, and not just acknowledge the somber nature of the memorial, but we ask people to wear a poppy that day and honor those sacrifices.”