The Mysterious Origins of ‘HOOAH,’ The Army’s Beloved Battle Cry

To a civilian, “hooah!” can sound like a completely nonsensical utterance, the guttural wail of an unhinged man on the... 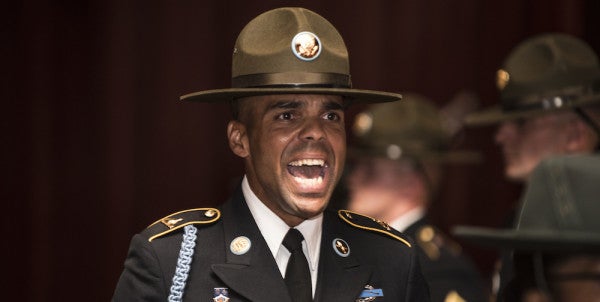 To a civilian, “hooah!” can sound like a completely nonsensical utterance, the guttural wail of an unhinged man on the verge of defeat. But to a soldier in the U.S. Army, it’s a fearsome battle cry that's heard on battlefields and among battalions deployed around the globe.

The meaning of the battle cry is difficult to describe: According to the Army’s Brief Guide to Modern Military Jargon, “hooah” can mean anything aside from no, and dropping the magic word “can do anything from getting a Soldier off the hook to earning him or her pushups,” the guide cautions. But while some Navy units have adopted “HOOYAH” and the Marine Corps now lays claim to “OOHRAH,” the characteristic road belong, always, to the Army.

But how did the primal roar became a mainstay of Army vernacular? For decades, the answer has remained a mystery even to the most devoted soldiers, and military message boards have surfaced theories about historical origins of the favorite battle cry. Here are the top four answers — as well as some real-keeping from a retired general:

It was first uttered by a Seminole tribal chief.

According to E. Kelly Taylor’s 2009 history “America's Army and the Language of Grunts: Understanding The Army Lingo Legacy,” one theory suggests that hooah originated with the Seminoles in Florida in the early 1800s, where tribal Chief Oseola was unable to say the words of a formal toast during a meeting with Army commanders and instead dropped a solid ‘Hooah!’”

Sounds like a stretch, but it’s a rumor that’s made the rounds in one form or another. One Snopes commenter swore in 2005 that they’d heard something similar on an American Forces Network broadcast:

A group of soldiers (esp. one specific general, but I'll be damned if I remember who) sat down to eat with a group of Native Americans. (When or where, I cannot remember. Why am I writing this?) Anyway, when they said hello to the Chief, he replied, “Hooah.” Supposedly, he was trying to say hello back, but didn't speak English, so he messed it up.

We call shenanigans on this one — especially since Osceola (that’s the accepted spelling) probably spoke pretty good English; his birth name was Billy Powell. And conflicting reports suggest it was not Osceola, but a Chief Coacoochee who instead mispronounced “how do you do.”

“Vâng” in Vietnamese translates to “yes,” but it’s pronounced “u-ah.” Service members and veterans on Snopes message boards often cite this as the origin of the battle cry, derived from years of fighting in the Vietnam War. Supposedly, because the Vietnamese soldiers answered “u-ah” in place of “yes,” American troops began to pick it up as shorthand for an affirmative.

This jives with Taylor’s own interpretation of hooah as “acknowledgment or agreement with hooah meaning “yeah,” “okay,” “sure,” “that’s right,” or “whatever.”

And our personal favorite: It’s an acronym.

The Army, nay the entire military, loves acronyms. And as far as ”hooah” goes, there are a few rumored explanations. The first reportedly comes from the 82nd Airborne Division during World War II, whose soldiers would reply to orders from their commanding officers with “HUA,” an acronym for “heard, understood, acknowledged.”

But across various chat boards, other origin explanations crop up: HUA really stands for “head up ass,” or HOOA, for “head out of ass.” It kind of reminds us of Mattis and the origin of his call sign (CHAOS, not Mad Dog).

A fourth, less mentioned theory documented by Taylor suggests the term dates all the way back to the Civil War, wherein soldiers supposedly shouted “hoozah.” But this explanation is also difficult to verify, as few other historical resources cite this as the answer to the hooah origin question.

The Army’s answer: Who cares?

In truth, there is no definitive proof of any of these “hooah” origin stories (the Army did not respond to multiple inquiries from Task & Purpose for confirmation). But even though soldiers aren’t learned in the historical birth of their battle cry with with any real authority — or even how to spell it correctly — they still know damn well what it stands for when they’re rushing into battle.

“I don't know how exactly to spell it, but I know what it means,” former Army Chief of Staff Gen. Gordon R. Sullivan told The Balance. “It means we have broken the mold. We are battle focused. Hooah says — ‘Look at me. I'm a warrior. I'm ready. Sergeants trained me to standard.’”