Stop Using The Uniform To Make Your Political Point

It's a problem that spans politics and principles: Veterans donning their old military gear and going out in public in... 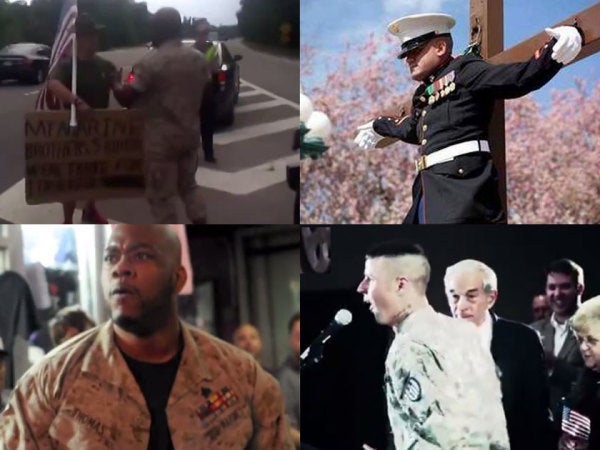 It's a problem that spans politics and principles: Veterans donning their old military gear and going out in public in support of their political cause.

In 2011, during the Occupy Wall Street movement, a Marine veteran put on his camouflaged utilities with his ribbons and one-rank insignia and yelled at the NYPD in Times Square.

In 2012, an Army reservist, Cpl. Jesse Thorsen, went on national television in his uniform and endorsed Ron Paul for president.

Earlier this year, former Marine Sgt. Joshua Klohr literally fastened himself to a cross in his dress blues to protest the circumstances of his discharge and court martial.

And most recently, a former Marine drill instructor, Ethan Arguello, donned his campaign cover to protest the prisoner exchange between the U.S. and the Taliban for Army Sgt. Bowe Bergdahl.

I get it. You're really passionate about your politics. And serving in the military was the most important thing you ever did. It likely even strongly influenced your politics and worldview. Plus, you have all this old uniform stuff just taking up space in your closet. All of these things are true for me, too.

Passionate political engagement from this next generation of military veterans is of paramount importance, but stand on the merits of your own ideas. Wrapping yourself in the symbolism of the armed forces doesn’t strengthen your argument, it detracts from it. It carries the implication that all of the troops hold similar political beliefs, and that’s not the case. Americans participate in the political process on their own, the right to free speech is an individual one.

But you're not representing anyone else's political views other than your own. Don't be so presumptuous as to think your politics are shared by everyone. I'm a Marine, and I support the Bergdahl exchange, deplore the Occupy Wall Street movement, think Ron Paul would make a terrible president, and think that guy on the cross probably deserved to be discharged.

In defending his choice to wear his campaign cover, Arguello said he wore the hat to represent active-duty Marines who can’t protest, according to local news reports.

How nice of you, but there’s one problem. Active-duty service members are allowed to voice their political positions, they simply aren't allowed to do it in uniform, or imply that their views represent anyone’s other than their own, and neither should you.