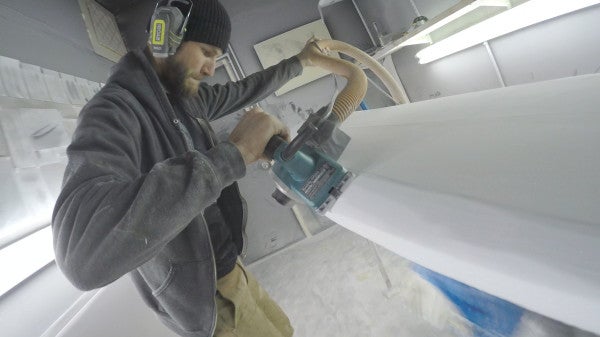 Two things strike me about Tyler Jorgenson. The first is that while in the Marine Corps, he pursued a bachelor’s degree in architecture and now just two years out of the military, he is an architect for a firm in Brooklyn, a career in itself that warrants attention. The second thing about Jorgenson, though, is that his career as an architect is not what he is interested in talking about. In his free time — which begins around 7 p.m. and goes to the early hours of the morning — the 28-year-old designs customized surfboards in his Brooklyn workshop, a hobby he refers to as his “other job.”

Jorgenson recently spoke with Task & Purpose to discuss his transition from the military, his life now, and what advice he’d offer the next veterans to take off their uniforms.

Jorgenson graduated from high school in 2004 in Arizona, and rather than going to college, he joined the Marine Corps. He was more interested in an adventure than hitting the books, he says, so he chose the most difficult thing he could think of.

As a combat engineer and logistics motor vehicle operator in the Corps, Jorgenson deployed to Iraq in 2007-2008. He also spent time in England and Norway training foreign militaries on behalf of the Marine Corps.

Jorgenson describes his military service as the best experience of his life, aside from surfing. “I loved getting dirty and working long days with my guys. Never have I been more proud of a group of people,” he says.

While in the Marine reserves, Jorgenson completed his architecture degree in 2012 from the University of Arizona. His passion for design, construction, and working with his hands served him well in the Marines when his team was building combat outposts, forward operating bases, police stations, and checkpoints. That fabrication knowledge lent itself well to an architecture degree and a mode of thinking and design.

While the Marine Corps shaped Jorgenson into the driven individual he is today, his degree taught him “the value of working outside of the box and not just thinking with my mind, but making as a way of thinking, using my hands and letting all my senses tell me what is good and bad design.” He sets very high standards for himself, accepting nothing other than “excellent craft, execution and precision.”

This commitment to excellent craftsmanship it what makes Jorgenson a natural surfboard maker.

From architecture to surf boards.

An avid bike rider growing up, Jorgenson always felt a close engagement with the wilderness, but that was lost when he arrived in New York City. However, he saw it as an opportunity to try something new. Fascinated by the sport of surfing, he decided to try it out, but as a recent college graduate, Jorgenson couldn’t afford to buy a board, so he built his own.

“Being an architect, I was making things all the time,” Jorgenson says. “So I thought, Okay, I am just going to make a surfboard.” While Jorgenson calls his first creation “an absolutely hideous mess,” he kept at it, making three-to-four boards a week until he finetuned his craft, which ultimately evolved into a business.

In 2012, Jorgenson launched Wax / Surf Co. with his best friend, who also holds a separate full-time job. Together, they spend their evenings after work hand-making custom surfboards from block of foams to “shaped, finished glossed shiny pieces of functional art,” as Jorgenson refers to them.

Surfing, surfboards and surfers are very elusive in New York, and according to Jorgenson, surfboard makers are even more elusive. It’s part of the appeal that drew him to the sport in the first place. He says he loves his work because “I get to design what I want and people connect with that. … In most design and fabrication positions or fields, it’s the other way around where people tell you what they want and then you design it.”

One thing Jorgenson learned from his military service that sticks with him everyday is that nothing can be done later, everything must be done now. “There is no waiting around for anything,” he says.

For individuals just getting out of the military, his advice: Don’t be your own worst enemy.

“Life is like an honesty contest and the only thing standing in your way is yourself,” Jorgenson says, meaning if there is something you want to do, don’t think about what stands in your way, just go for it.

“All of the answers will not be right in front of you as you move into your new career path but if you are honest about what you want to do and peruse that then you can’t fail.”