“Soldiers exposed to something really dangerous cannot find out what it was because ‘Sorry it’s classified’?” said Thomas S. Blanton,... 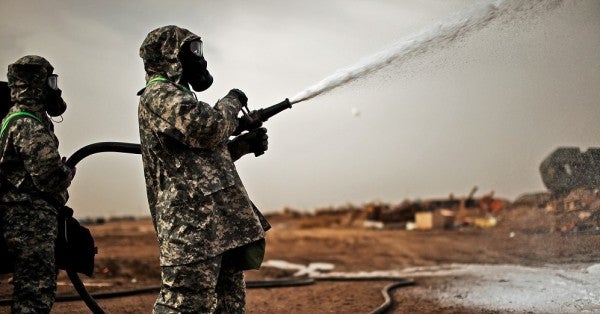 “Soldiers exposed to something really dangerous cannot find out what it was because ‘Sorry it’s classified’?” said Thomas S. Blanton, director of the National Security Archive. “It’s creepy and it’s crazy.”

C.J Chivers reports that after years of secrecy, the Army has released information about chemicals that troops in Iraq were exposed to. The chemical, which sickened more than 20 American troops at Iraq’s Camp Taji in 2003, was identified in a recent report from the Army as TG-02, or Tonka fuel. The chemical is known to cause acute symptoms after exposure, which mirror those of nerve agents. Symptoms include intense headaches, confusion, weakness, depression of the central nervous system, and death.

Service members who have sought treatment for exposure to chemicals have been hampered by the secrecy surrounding Iraq’s chemical weapons. Unable to seek care or medical attention from Veterans Health Administration because the records related to the incident were classified, victims say they lacked the information needed to put their concerns and fears at ease, and were unable to pursue medical care or file disability claims.