Marine Sgt. Maj. Paul Archie told his story for the first time since resigning from his position as the top... 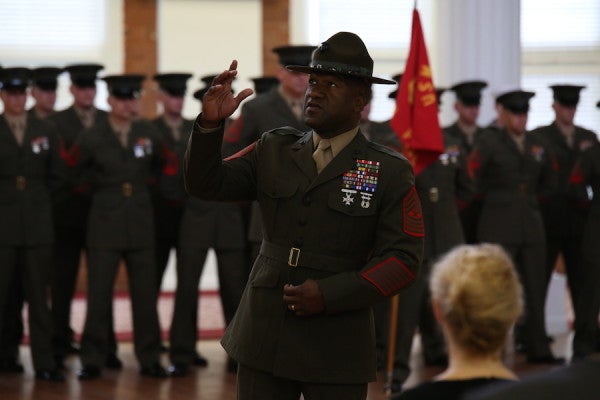 Marine Sgt. Maj. Paul Archie told his story for the first time since resigning from his position as the top enlisted Marine at Parris Island and retiring from the Marine Corps altogether. Archie was the subject of a viral video taken outside the Parris Island gate; in the video Archie angrily confronts former Marine Sgt. Ethan Arguello, also a drill instructor, for wearing the iconic “Smokey Bear” campaign cover while protesting the release of Army Sgt. Bowe Bergdahl in a prisoner swap with the Taliban. Task & Purpose covered this incident this past June.

Archie says that he had called Arguello to ask him not to wear the cover at the protest a few days prior. When other Marines informed Archie that Arguello had indeed worn it, the Sergeant Major decided to confront him. The video shows an escalating shouting match, and then Archie snatches the cover away from Arguello and drives off in his own vehicle. Archie troubles began when local police notified him that Arguello had pressed charges for third-degree assault. Soon after, Marine leadership at Parris island asked him to step down; Archie elected to both resign and retire early.

Archie said the Marine Corps moved too quickly to force him out of his post. He said he did not get the opportunity to tell his story, and explain his emotional state at the time of the incident; Archie had just return from his father’s burial in Texas, and a Parris Island drill instructor had died by suicide the day before. The sergeant major does acknowledge that he should have walked away from the incident; but still insists that he was trying to do right by the Marine Corps.