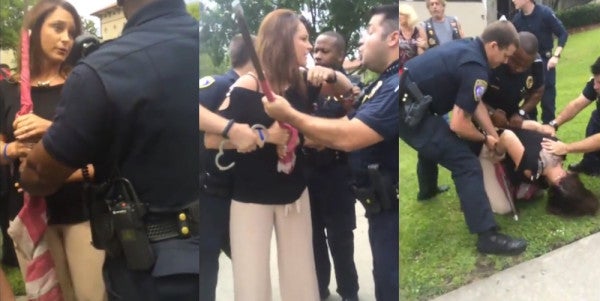 I’ve watched the video of former Air Force Staff Sgt. Michelle Manhart’s arrest on April 17, at Georgia’s Valdosta State University, about a half a dozen times now, and I am still trying to make sense out of what I saw.

The video shows Manhart walking away with an American flag that Valdosta State students were stepping on during a demonstration against racism in the United States. As Manhart tried to leave with the flag, she got into a verbal altercation with one of the students, which was mediated by the police who told her to hand it over. When Manhart refused, officers put her hands behind her back, or tried to. It took a few minutes for them to get the cuffs on, and she didn’t make it easy. After forcing her to the grass, police arrested her.

As the Washington Post notes, the six and a half minute video hits a number of sensitive issues from race and police conduct, to war and freedom of expression. But one topic that has gone largely unremarked upon, is elitism in the veteran community. In particular, veterans who feel the need, and in some cases, feel they have the responsibility to police others’ behavior.

There’s no shortage of videos or stories of veterans, or active-duty military, taking it upon themselves to correct civilians, from calling out, or slapping stolen valor assholes, to veterans stopping protesters from stomping on, and burning flags, or flying them upside down.

As a veteran or a member of the military, you can't burn people at the stake for exercising the very rights you swore to defend.

There’s a poem by Charles Michael Province, that aptly sums up this sentiment:

Further, I have a few issues with Manhart in particular deciding that she is the right one to police the behavior of other Americans. Manhart, a former Air Force training instructor at Lackland Air Force Base, left the service after posing naked for Playboy in 2007 while on active duty and in uniform — or part of it.

Manhart made another public and controversial appearance in 2008; this time on video, and it also involved the American flag. As part of a campaign for the People for the Ethical Treatment of Animals, she posed nude with a pair of American flags over her breasts.

Yes, the same veteran who took a flag from students who stomped on it — as a form of protest — albeit, an offensive one, posed with it in her birthday suit, also exercising her First Amendment rights.

If Manhart had never posed naked with the flag, however, she would still be in the wrong — it wasn’t her property to take, it belonged to the students. The hypocrisy of her posing naked with the flag, then rallying to its defense just makes the whole situation all the more contradictory.

That’s why I take issue with Manhart telling others how to behave — she’s setting an example all right, just the wrong one. It’s not just that she makes veterans look bad, and she does, I worry that veterans aren’t being critical enough of each other when it comes to a growing sense of entitlement — this assumption that because we served, and defended American freedoms we have the final say in how those freedoms are expressed.

Throughout Manhart’s video, one phrase is stuck in my head, and it’s this little gem: “This flag belongs to the entire United States.”

Manhart said this while holding on to the flag in a three-way tug of war between an exhausted-looking police officer and a student during the protest.

Yes, that flag does symbolically belong to the entire United States. The students who walked on it, and the cop who had his hands on it have just as much of a moral claim to Old Glory as you do, Manhart.

But, the owner is whoever bought and paid for it.

The Air Force Times spoke with Manhart on Monday, and she explained why she felt compelled to intervene: “We drape that flag over many coffins over the men and women that unfortunately don't get to come home the way they left; over our firefighters, our police officers, a lot of our civil servants,” Manhart said in the interview. “If you're walking on that flag, then you're also walking on their caskets and you're walking on everything they stood for and you have no respect for the freedom that they have fought to make sure that you can have.”

I agree with a lot of what she says. Stepping on the flag, burning it, desecrating it — it’s offensive, it’s outrageous, because it’s a slap in the face to those who have fought, bled, suffered, and died to defend what it represents. But it is a First Amendment right, and it is every veteran and citizen’s right to engage those who desecrate the flag in dialogue. However, if you feel the need to take the flag back, or engage with others physically, you run the risk of being arrested, which is what happens when you break the law.

Before you write off communication and dialogue, consider this: If Manhart had just spoken with the students, even if they hadn’t stopped walking on the flag — there would be no story here. It never would have gone viral, and the message of the protest wouldn’t have spread. But she didn’t, and arguably she wanted it to blow up. Manhart’s daughter recorded the scene, and at the end of the video — after the cop gives the flag back to the students — Manhart tells several bystanders to look in her car for a list of media contacts, to tell them about her arrest.

There are problems with how this situation was handled. First and foremost, Manhart never should have taken it upon herself to secure the flag from protesters. The result of her intervention was her arrest, and a viral video that makes her look far worse than the students treading on the flag. Now, it’s just another clip of a military veteran telling civilians how to behave, and wrongfully sends the message that we, as veterans, feel we have more skin in the game when it comes to constitutional rights.

CORRECTION: The original article cited Denis Edward O'Brien as the author of the poem “It Is The Soldier.” The poem was written by Charles Michael Province. (4/23/2015; 11:23 am).