Flooded With Support, Standing Rock Vets Ramp Up Operation And Brace For Showdown

Veterans Stand For Standing Rock, the group planning to “deploy” hundreds of military veterans to the Standing Rock Sioux Reservation... 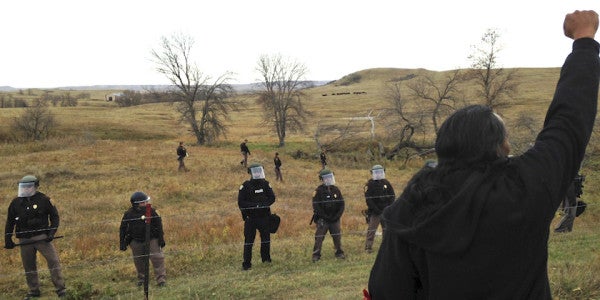 Veterans Stand For Standing Rock, the group planning to “deploy” hundreds of military veterans to the Standing Rock Sioux Reservation to protest the Dakota Access Pipeline in early December, has raised upward of $80,000 on GoFundMe in the past 48 hours, bringing the total to more than $100,000 at the time of this writing. The surge in donations has coincided with a wave of media attention the group has received over the past two days. The organizers also raised their original campaign goal from $100,000 to $200,000, a sign of their increasing confidence that they will draw big numbers to the protest on Dec. 4.

“I increased the goal because I was wrong,” says Michael A Wood Jr., a Marine Corps veteran and one of the chief organizers of the group. “I was giving a ballpark number that we could get 500 people there without feeling like I was asking much of the public. In a short period of two days, the picture changed dramatically. As long as we’re increasing in size, I have to ask for more funds. And as long as we have more funds, we will increase in size.”

From the outset of the campaign, Wood Jr. and his fellow organizer, Wes Clark Jr., an Army veteran, have insisted that the money raised on GoFundMe will be used only for transportation and to bail out members of the group who get thrown in jail during their “deployment” — a legitimate concern considering more than 500 activists have been arrested during the protests so far. But with the increased funds, Wood Jr. says, the group will be able to afford more equipment and supplies to aid them in their three-day mission, which will culminate in an attempt to break through the line of guards protecting the Dakota Access construction site.

“This is already way beyond transportation,” Wood Jr. says. “So the additional funds will go toward protective equipment, infrastructure, lodging, food, medical supplies, and stuff to help deal with the elements of nature.”

The Standing Rock Sioux Reservation, which spans the border of North and South Dakota and is home to members of the Lakota and Dakota nations (known collectively as Sioux), has been the site of an increasingly tense standoff between law enforcement-backed security contractors and activists since July, when the U.S. Army Corps of Engineers approved a plan to build one of the final segments of the 1,170-mile Dakota Access Pipeline on land adjacent to the reservation, sparking a massive protest that has drawn activists from as far as Israel, Russia, and Japan. According to the Standing Rock Sioux, the planned route, which will cross beneath the Missouri River, will threaten their drinking water supply and destroy sacred sites and burial grounds located on land that the government stripped from the Sioux in the past.

Veterans For Standing Rock is headed to the area at a time when the situation on the ground appears to be growing increasingly chaotic. On Nov. 20, a 10-hour standoff between demonstrators and the police resulted in 300 people injured, according to the Standing Rock Medic and Healer Council. The following day, a 21-year-old woman underwent surgery on her arm after she was severely wounded by what activists claim was a concussion grenade thrown by police; the Morton County Sheriff’s department disputed the claim, stating on its Facebook page that the cause of the injury was an improvised explosive device detonated by protesters. Previous claims of excessive police force recently prompted the United Nations to launch an investigation of potential human rights abuses.

In addition to concussion grenades, security contractors and law enforcement have repelled activists, often numbering in the hundreds, with pepper-spray, fire hoses, batons, dogs, and rubber bullets. On Dec. 4, with the arrival of the Standing Rock vets, the number of protesters on the ground could swell significantly — a possibility bolstered by the recent flood of donations and applications the group has received. “We’ve grown to the point where we have an actual chain of command now,” Wood Jr. says. “Emails are hundreds a day, if not thousands.” He adds, “I did not expect this. I am extremely happy to be stressed out right now, trying to make this as soon as possible. Just the other day, Wes asked me, ‘What do we do if we get over 500?’ I replied, with pessimism, that we’ll cross that bridge when we there. Well, now we’re scrambling to cross that bridge, but with the funding pace, as long as we have the public’s support, we’ll make it happen.”

Jon Don Ilone Reed, an Army veteran and member of South Dakota's Cheyenne River Sioux Tribe, poses for a photo at an oil pipeline protest near the Standing Rock Sioux reservation in southern North Dakota on Thursday, Aug. 25, 2016. Reed said he fought in Iraq and is now fighting “fighting for our children and our water.”AP Photo by James MacPherson

Of course, more boots on the ground means more opportunities for people to get hurt. Veterans Stand For Standing Rock advertises itself on its GoFundMe page as “a peaceful, unarmed militia,” and both Wood Jr. and Clark Jr. are adamant that the group will stick to its nonviolent mandate no matter how heavy-handed the police response is. So far, it appears that the most violent episodes of the standoff have occurred when the demonstrators confronted the guards in overwhelming numbers. But for Wood Jr., a former Baltimore police officer, the response reflects a failure of authorities to recognize the protesters’ constitutionally protected rights of free speech and peaceable assembly.

“When you are talking about a protest in public, you shouldn’t be in this situation to begin with,” says Wood Jr. “If at any point in time, a police department is overwhelmed by a thousand citizens who have a statement to make, well, win.”

Wood Jr. points out that the violent efforts by law enforcement to dislodge the protesters merely prove his point that they have abrogated their responsibility to protect and serve the public, acting instead on behalf of private corporate interests. “They are offering no service or protection to those they are fucking sworn to protect,” he says.