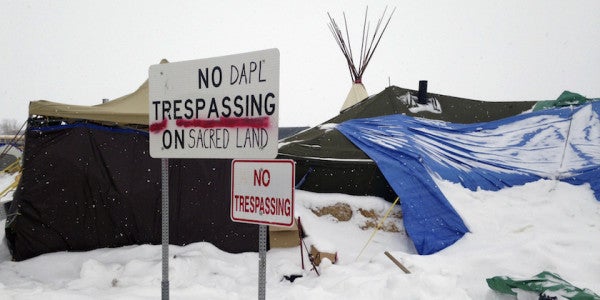 On Dec. 3, 2016, approximately 4,000 military veterans descended on the Standing Rock Sioux Reservation in North Dakota to protest the construction of a portion of the Dakota Access pipeline slated to run across disputed Sioux land and beneath Lake Oahe, the source of the reservation’s drinking water supply. With the veterans came thousands more protesters and swarms of reporters. The following day, the U.S. Army Corps of Engineers denied the easement. Celebrations erupted across the reservation.

Too soon. On Jan. 31, Sen. John Hoeven of North Dakota released a statement announcing that acting Secretary of the Army Robert Speer had directed to Corps of Engineers to proceed with the easement, one of the final pieces of the 1,172-mile pipeline that will shuttle crude oil from North Dakota to Illinois.

For supporters of the pipeline, who see the Dakota Access as both a source of jobs and energy independence, the announcement marks a huge victory. For the Standing Rock Sioux and environmental activists, however, it’s a devastating blow — one that will likely be responded to with the sort of massive protests that led to the denial of the easement in December. The Indigenous Environmental Network, a leading tribal organization committed to blocking further construction of the pipeline, told CNN: “Make no mistake: we are prepared to mobilize and resist this brazen power grab.”

The Standing Rock Sioux tribe, whose members regularly clashed with private security-backed law enforcement officials throughout the summer and early fall, maintains that the project cannot resume until a further environmental review is conducted and has called Hoeven’s announcement premature. Their determination to stop the pipeline was evident over the months of protest that occurred since construction on the edge of the Standing Rock reservation began. Many people, both locals and outside supporters, were arrested and wounded during the clashes, prompting a UN investigation into potential human rights abuses.

The news doesn’t come as a total surprise, not even to some of the protesters. Following the denial of the easement, as fireworks exploded over the main protest camp on the frozen banks of the Missouri, rumors began to swirl that the Corps of Engineers was merely biding its time until the Trump presidency began. The new president has long been a supporter of the Dakota Access and for a time owned stake in Energy Transfer Partner, the company building the pipeline, which donated generously to Trump’s election campaign.

“President Trump is legally required to honor our treaty rights and provide a fair and reasonable pipeline process,” said Archambault II. “Americans know this pipeline was unfairly rerouted towards our nation and without our consent. The existing pipeline route risks infringing on our treaty rights, contaminating our water and the water of 17 million Americans downstream.”