Whistleblowers Reveal “Lies, Damned Lies, And Statistics” Within The VA

Dr. Katherine Mitchell has worked at the Phoenix Veterans Affairs hospital for 16 years and there’s one memory that still... 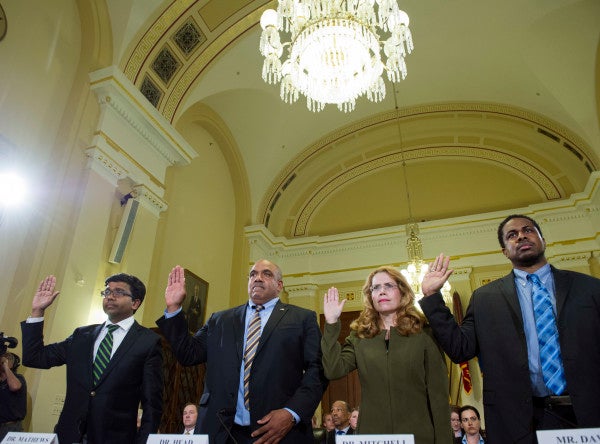 Dr. Katherine Mitchell has worked at the Phoenix Veterans Affairs hospital for 16 years and there’s one memory that still torments her: A nursing shortage that left many patients with huge bed sores, but plenty of overtime for data collection.

“I can remember JCAHO [Joint Commission on Accreditation of Healthcare Organizations] certification inspections that to this day still haunt me because administration would authorize overtime for charting because a JCAHO administrator would look at charting, but would not authorize overtime for nursing staff to turn patients because there wasn't enough staff to do it, or to feed patients. We used to volunteer our time quite a bit because we couldn't leave the team short-staffed,” Mitchell testified last week at a House VA committee hearing on retaliation against VA whistleblowers.

Asked if the Office of the Inspector General was using flawed methodology in their oversight reports, she responded, “Yeah, there’s a saying that has to do with lies, damned lies, and statistics.”

Even suicide data was kept in the dark, she said.

Reports of fudged wait times and a lack of oversight date back at least to a 2005 OIG report, but since April, a constant stream of new allegations indicate a rot that strikes at every level of the VA across the country.

At the hearing, the focus was on whistleblowers and the consistent pattern of cover-ups and retaliation. This is not unusual for those rocking the boat in any large organization, and even a federal hospital network is not exempt. But it was clear that even getting simple data was difficult for even a conscientious VA employee.

“The manipulation of data to gain performance goals is a widespread cancer within the VA,” Rep. Jeff Miller, chairman of the House veterans committee, said in his opening remarks. “We have often heard that VA is a data-rich environment. But when data is exposed as vulnerable to manipulation, it cannot be data that is trusted.”

Dr. Jose Mathews, former chief of psychiatry at the St. Louis VA, testified that he became very disturbed by reports of excessive wait times. He described a disabled veteran who had a friend drive him several hours in order to get treatment and a prescription refill. “He was sent away with another appointment 48 days later, and his medications were not refilled,” he told the committee.

Mathews started to dig, and found that whatever the problems might be, too many patients and too few psychiatrists were not one of them. “I verified that the psychiatrists would only spend approximately 3.5 hours in direct patient care. I could not account for the rest of their time.”

He found that much of the data he wanted was simply unavailable. Patient satisfaction as a metric was either incomplete or non-existent in his department. “Very soon I realized that the metrics I had that the VA was putting out was not reflecting what I was actually seeing.”

In order to get more accurate patient satisfaction reports, Mathews decided to utilize an outside organization. “I wanted this survey to be a complete set, so I talked to some donors who I knew from Washington University, and they pledged $60,000 over two years to institute a real-time veteran satisfaction survey.” The trouble started when the proposed survey included questions about individual medical providers and Mathews was transferred to compensation and pension evaluations. He was also told there would be an administrative investigation.

Even simple enrollment in the Veterans Health Administration has proven problematic with officially more than 600,000 backlogged applications for health benefits. But that number doesn't tell the whole story. Scott Davis, a program specialist with the Health Eligibility Center, says that 40,000 applications were hidden for four years, and 10,000 others that might have been shredded are being investigated.

Even though a new queue system had already been developed and paid for, it was not implemented until those problems were brought to light. “That is something that is shameful,” Davis said.

If a due diligence-minded employee might know there is something wrong, they very often cannot access data to prove it, even when this data is directly related to their duties. It shows an agency so fragmented that the right hand doesn't know what the left hand is doing.

Dr. Mitchell summed it up. “With the whistleblower retaliation and cooking up numbers, it's basically sending all the wrong messages that it doesn't matter. Care is optional. We'll protect you. We'll come up with the numbers. You know, it's so corrosive.”