In a rollout ceremony last week, Sikorsky revealed the finished prototype of its new light helicopter design, the S-97 Raider.... 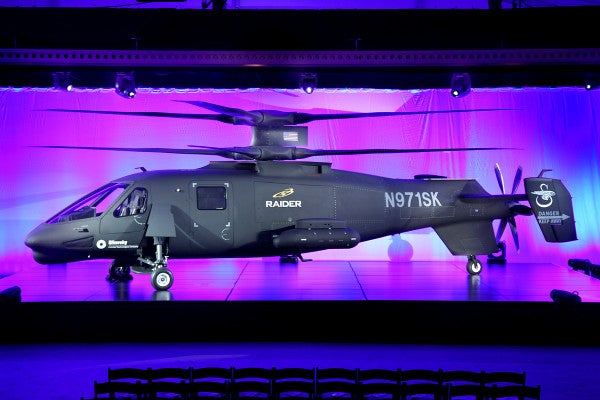 In a rollout ceremony last week, Sikorsky revealed the finished prototype of its new light helicopter design, the S-97 Raider. The Raider is a radical departure from most other American military helicopters, featuring a co-axial rotor design featured on Russian helicopters like the KA-50 Black Shark, as well as a compound helicopter pusher rotor reminiscent of the Army’s canceled AH-56 Cheyenne gunship project from the 1970s.

The S-97 was originally designed for the Army’s Armed Aerial Scout program, which was intended to find a replacement for the aging fleet of OH-58 Kiowa Warriors. The Army suspended the program in 2013, and now plans to retire the Kiowa and move more AH-64 Apaches currently in the Reserves and National Guard to the Army in order to fulfill the scout role. Still, Sikorsky hopes to position the Raider as a replacement for the reserve Apaches in a light-attack role. And it may have another customer in Special Operations Command, which is considering the S-97 as a replacement for the MH-6M Little Bird, the venerable little helicopter that serves as a light transport and attack platform for the Army’s elite 160th Special Operations Aviation Regiment.

The Raider is scheduled to have its first flight in December, and full flight testing is expected to be underway by 2015. But it will only see service if it can find a necessary role in the Army. The past several Army helicopter programs have borne little fruit; the Army’s long running Light Helicopter Experimental project that produced the stealth RAH-66 Comanche was canned in 2004.