Bowe Bergdahl And The Disillusionment Of War

“The future is too good to waste on lies,” Army Sgt. Bowe Bergdahl wrote his father in an email shortly... 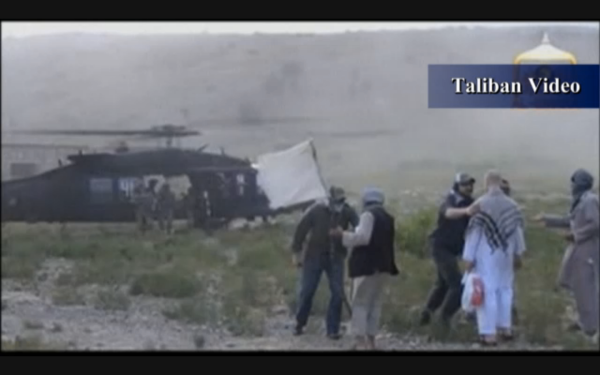 “The future is too good to waste on lies,” Army Sgt. Bowe Bergdahl wrote his father in an email shortly before he was captured in Afghanistan five years ago. He continued:

And life is way too short to care for the damnation of others, as well as to spend helping fools with their ideas that are wrong. I have seen their ideas and I am ashamed to even be American. The horror of the self-righteous arrogance that they thrive in. It is all revolting.

Every soldier who ever went to war knows about disillusionment. From titanic battles that shaped world events for generations, to patrolling a dusty, mountainous border in central Asia, every soldier is going to ask themselves, “What the hell am I doing here?” This was as true at Gettysburg and Normandy as it was in Paktika province, when Bergdahl took a stroll off his outpost in 2009.

The gap between expectations and what has and is actually happening in Afghanistan is a chasm wider the Grand Canyon, and it is made all the harder because lives are lost on both sides and the price tag balloons by the billion. It’s been over 12 years and despite real improvements in many Afghans’ lives, to the casual soldier, the country is as big a wasteland as it’s ever been, and the Taliban just as intractable. In 2006, I spent 16 months patrolling the Pakistan border in Paktika, where Bergdahl served for four months before being captured by the Haqqani network and handed over to the Taliban. Then I came back and did it again in 2009 in Wardak. I know about disillusionment and arrogance.

It is hard to keep any ideals or hope in the face of appalling waste, wanton brutality, and bureaucratic and political idiocy, even if at heart I really did want to help the Afghans, just as Bergdahl apparently did. My unit in 2006–2007 was more concerned with racking up a high Taliban body count on the border than any development or reconstruction, but even our half-hearted efforts at helping the locals were usually for naught. A freshly built school, little more than a couple of retrofitted shipping containers, was blown up overnight. Solar-powered street lights in the local bazaar were shot out one by one. Roads, the eternal lack in Afghanistan, were turned into IED crater-riddled death traps. The list goes on.

Then there were the human costs. Abdul, as hard a fighter as I ever saw in Afghanistan who served as an interpreter, was shot off his motorcycle while visiting home. He had been fighting for 20 years, against both the Russians and the Taliban, but in the end he died working for us. Or five children killed playing in the field, the victims of a rocket aimed at our base. Their parents dragged them to our aid station, but not much could be done. I saw villages turned into ghost towns because between Taliban rockets, our counterbattery targeting the same, and countless firefights, it was just impossible to live there anymore. These villages had stood for a thousand years, but they were empty now. Whatever we did, we brought as much pain as we did comfort, just by our very presence. Who can be happy with that?

Perhaps Bergdahl is right that we are unspeakably arrogant to try to impose our values and will on the Afghans. How we are any worse than the Taliban — whose answer to any dissent from their values usually involves a rusty sword to the neck or a bullet in the back of the head — I will leave that to each person’s judgment. I lost track of how many soldiers I knew with this kind of attitude. “We’re wasting our time here” was practically a proverb, rarely far from people’s lips.

Bergdahl was fed up, pissed off, and ready to leave, which made him about as exclusive as Walmart. If he was done, so be it. He could have refused to patrol, and they would have sent him to the rear on make-work until they could discharge him. He could have walked into the command post smoking a joint, and ditto. He could have shot himself in the foot and been at Walter Reed in a matter of days. He could have gone on leave and pulled his disappearing act at home.

Bergdahl could have done all these things, and that would have been the end of the matter. Instead, he took the most asinine, selfish, and borderline treasonous course of action possible. He simply sent his personal effects home and wandered off, leaving his unit to hold the bag.

What the Golden Rule is to Christianity, “Don’t be a Buddy Fucker” is to the military. If you can’t be motivated to make things better for the people stuck in the same dirt pile you are in, then at the very least, don’t make things worse. This is the glue that binds a platoon of disparate individuals from all walks of life together, and it is the only thing that makes life in the infantry bearable. Don’t Fuck Your Buddy. A simple rule.

Bergdahl stuck his fellow soldiers with patrols they normally wouldn't have had to do, endless interviews with frustrated investigators, and yet another sense of futility in yet another hopeless mission in trying to track him down. Lives may well have been lost as a result, and more caskets took that long flight to Delaware. He made his unit’s life far worse than it had to be, and even the lowest, dumbest private could have seen that coming. Bergdahl knew what his disappearance would trigger, yet he did it anyway. He committed the unpardonable sin and deliberately betrayed his unit.

I think it unlikely that Bergdahl will face much official repercussion. They may well file charges, but it’s likely it will be left at time already served, in conditions far less congenial than even military prison. But if I were you, Bergdahl, I wouldn't try too hard to get in touch with your fellow soldiers. They have your measure, and it can be described in two words. I have to wonder how wasted that good future is feeling now.