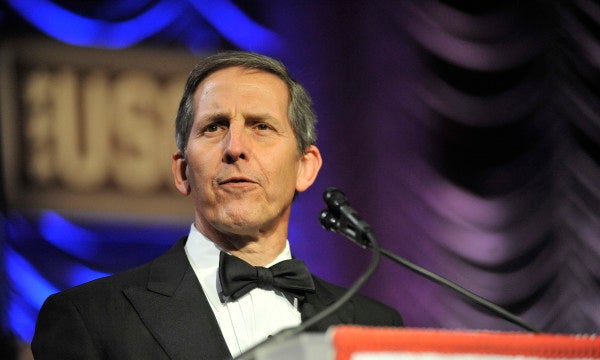 President Barack Obama accepted the resignation of Veterans Affairs Secretary Eric Shinseki today, an enormous development in a widening scandal of veterans not receiving medical care from the VA.

But Shinseki’s departure puts the burden of leadership squarely on the shoulders of Sloan Gibson, the former deputy secretary of Veterans Affairs, who is now acting secretary.

Here’s what you need to know about Gibson:

Gibson earned both his airborne and Ranger qualifications in the U.S. Army, where he served as an infantry officer after graduation from West Point.

Before his appointment to the VA, Gibson spent five years as the president and chief executive officer of the United Service Organization, the prominent nonprofit that provides morale-boosters and entertainment to service members and their families.

3. He has experience in the private sector

In 2004, Gibson retired as chief financial officer and chairman of AmSouth Bancorporation, a now defunct finance and insurance corporation.

4. He has been at the VA less than six months

Gibson was confirmed by the Senate Feb. 11 of this year, giving him just 108 days of experience in the organization he now leads.

It’s unclear how long Gibson will serve as interim secretary — Obama expressed a desire to name a replacement quickly — but for now, Gibson’s at the helm.