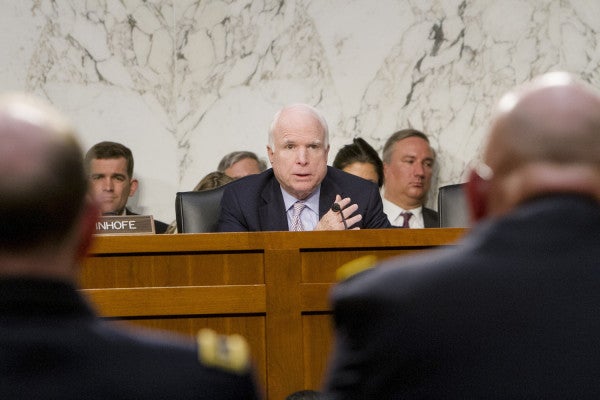 The Senate voted 67 to 29 on Oct. 7 to end debate on the 2016 National Defense Authorization Act. The bill, which lays out defense policy and spending limits for the Pentagon for fiscal year 2016, is now slated to be handed off to the president. The House passed the bill Oct. 1 at a vote of 270 to 156.

The 2016 NDAA is a measure put forth to address emerging global threats through policy while funding the advancement of defense technology and providing adequate veterans’ benefits in the face of continued fiscal strain. The budget levels out at a total of $611.9 billion for all national defense programs, including discretionary spending. Of that, $495.5 billion will be allocated to the Pentagon’s annual base budget for 2016.

This bill is one of only a few bipartisan pieces of legislation to pass through Congress for more than 50 years. In place of the usual partisan squabbles encountered throughout the legislative process, the NDAA’s greatest threat comes in the form of a veto from President Barack Obama.

A number of congressional members laud the 2016 NDAA for supporting the men and women of the armed services and fighting global threats, like the Islamic State.

Vietnam veteran and Senate Armed Services Committee chairman Sen. John McCain, a Republican from Arizona, told reporters after the vote, “This would be one of the most disgraceful acts of any president.”

Despite continued cuts to both the budget and and troop numbers, the bill plans to provide a number of improved benefits to troops, including a 1.3 percent pay increase to service members. The language also includes provisions requiring coordination between the Defense Department and Veterans Affairs on a range of issues — much needed in light of the exposed mismanagement within the department.

Additionally, the Defense Department plans to replace the current 20-year, all-or-nothing retirement deal with a “blended” compensation system featuring an investment plan similar to a 401(k) and a one sum option.

Unfortunately, basic housing allowance will be steadily reduced to 95 percent, and Tricare insurance co-pays will rise for those who decide to fill prescriptions off-base.

Other provisions include authorizing lethal assistance to Ukrainian forces fighting against rebels backed by Russia, banning the CIA from using torture, and allocating $715 million to help Iraqi forces defend against the Islamic State.

In light of the recent shootings targeting service members in Little Rock, Arkansas; Chattanooga, Tennessee; and Fort Hood, Texas; the 2016 NDAA gives the defense secretary discretion in allowing post commanders to permit members of the armed forces to carry firearms at military installations.

Additionally, the bill provides for continued support to Afghan troops throughout the drawdown process. Roughly 9,800 U.S. troops will remain there through the end of this year.

If Obama vetoes the bill, the 2016 NDAA will be up for a revote, which will require 60 or more votes to pass.