Why Is A Comedian The Only One Talking About The Plight Of Afghan Interpreters?

Editor’s Note: This article originally appeared on the Council on Foreign Relations’ Defense in Depth blog on Oct 23. If... 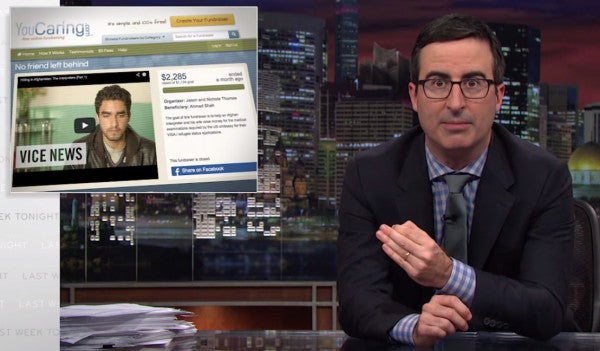 Editor’s Note: This article originally appeared on the Council on Foreign Relations’ Defense in Depth blog on Oct 23.

If you tuned in for last Sunday’s Last Week Tonight with John Oliver, you also watched some of the most thorough reporting to date regarding efforts to secure Special Immigration Visas (SIVs) for Afghan and Iraqi translators who have served for years alongside U.S. military personnel. When American servicemen rotate away, these translators remain—often becoming top-priority targets for reprisal attacks. Unfortunately, the State Department program intended to get Afghan translators and their families to safety has long been stuck in a bureaucratic swamp, stranding more than 6,000 Afghans across various stages of the process. With the visa program slated to end on December 31, many of these Afghans are now in very real danger of being abandoned. This raises two difficult questions: first, why has this been allowed to happen? And second, what now—at this late stage—can still be done to save them?

The first question, unfortunately, has an easy answer: asylum-seeking Afghans have been largely ignored by the U.S. government because they have no citizenship, no political leverage, and no large constituency to speak on their behalf. For most members of Congress, this places the plight of Afghan interpreters at the bottom of a very long list of issues. Conversely, the federal bureaucracy also has faced little urgency in speeding the process to grant safe passage to these individuals. There is no clear incentive to make the gears of the process move faster; on the other hand, there are ample reasons to move slowly. What civil servant would want to bear even tangential responsibility for letting a potential security risk into the United States?

In fact, the only reliable constituency for Afghan interpreters have been the American men and women who fought alongside them. As Rusty Bradley, a retired Army Special Forces officer with eight deployments to Afghanistan, recently wrote in a piece titled “Heroes Left to Die:”

I hear all the time about security concerns. The Department of State (DoS) is concerned about admitting Afghan interpreters for fear that al-Qaeda operatives will use the program to enter the United States. This is a loaded excuse. Apparently the State Department is not talking to the FBI, because al-Qaeda is already here. And even if they weren’t, they will not get here through this program. To be sure, there might be unsavory elements among any immigrant population. You don’t think some of the crime problems we have come from Mexican cartels and gangs? But unlike other potential immigrants, our intelligence staffs vet every Afghan interpreter numerous times. We trusted them with mission details, automatic weapons and our lives. The Afghans I sponsor and fully support to come to this country can live under my roof any day. I have vetted them time and again and they have proved themselves to be true, doing so under fire and in the most challenging of circumstances. Who could more deserving of the right to live, work, and enjoy our freedoms then them?

For all the lobbying efforts of U.S. servicemen and veterans, however, the Afghan SIV program has lagged terribly, even when compared to the also beleaguered Iraqi program (in which 6,500 of 25,000 authorized visas were issued). Four years after the initiative’s 2009 launch, the number of successfully processed Afghan visas remained abysmal: it awarded just 32 visas in 2012 to more than 5,700 applicants.

This poor performance prompted a review by Secretary of State John Kerry and incremental reforms that have gradually improved the process. Coupled with rare bipartisan Congressional action taken on August 1 to expand the number of available FY14 visas from 3,000 to 4,000, these have represented small steps in the right direction. But the (according to Oliver’s investigation) fourteen-step visa application process remains cumbersome, oversubscribed, and slow-moving—and time is running out.

This leads to the other big question: what comes next? The entire Afghan SIV program is currently in the process of winding down; the application deadline was September 30, 2014, and all visas must be issued by September 30, 2015. Yet Americans are still fighting in Afghanistan, the Taliban are far from defeated, and good translators remain one of the most critical links in the war effort. To let this initiative lapse on December 31 would be a tragic mistake and a moral failure.

There are signs of a solution from Congress. Two bills, introduced by Senator Jeanne Shaheen (D-NH) and Representative Earl Blumenauer (D-OR-3), would extend the program to the end of 2015. They languish now respectively in the House and Senate. If they are taken up and passed in Congress’ lame duck session, it will represent an important step in fixing this terrible oversight.

John Oliver may have reignited this conversation, but it shouldn’t end with him. These Afghans have put everything at risk to aid U.S. servicemen, arguably investing more than anyone else in the vision of a free and democratic Afghanistan. To fail them now would not only be a breach of faith—it would also signal to future would-be allies that the United States’ word is not to be trusted and that they help us at their peril. We can do better than this, and we must.

You can watch the full John Oliver monologue below:

Note: Mohammad Usafi, the former Afghan translator interviewed in this feature, has begun a petition to save his family’s lives and bring them safely to the United States. You can sign it here.

Emerson Brookingis a research associate for defense policy at the Council on Foreign Relations.