Oops, I Did It Again: Airmen Lose Machine Gun After Losing Box Of Grenades

The same Air Force unit that lost grenades is now missing a machine gun. An M240 machine gun was discovered... 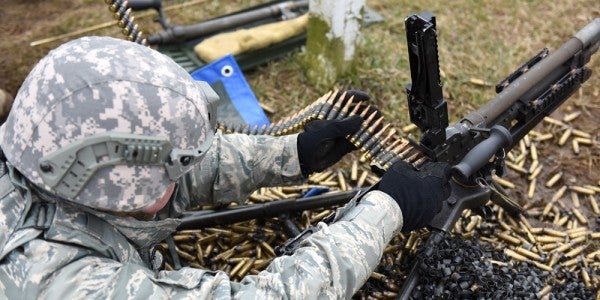 An M240 machine gun was discovered missing on May 16 during a standard weapons inventory at Minot Air Force Base, North Dakota, said Lt. Col. Jamie Humphries, a spokesman for the 5th Bomb Wing. The machine gun belongs to the 91st Missile Wing security forces.

“The 5th Bomb Wing and 91st Missile Wing immediately began a search of their weapons inventories and opened an investigation with the Air Force Office of Special Investigations,” Humphries told Task & Purpose in an email. “This investigation is ongoing and more information will be provided as it becomes available.”

The case of the missing machine gun comes about two weeks after airmen with the same security forces unit reportedly lost a box of MK 19 grenades, which fell out of the back of a moving vehicle.

UPDATE: This story was updated on May 18 to include the fact that Air Force Global Strike Command has ordered a comand-wide weapons inventory.