Air Force Chief of Staff Gen. Charles ‘CQ’ Brown Jr. was frank in assessing his progress on transforming the service. 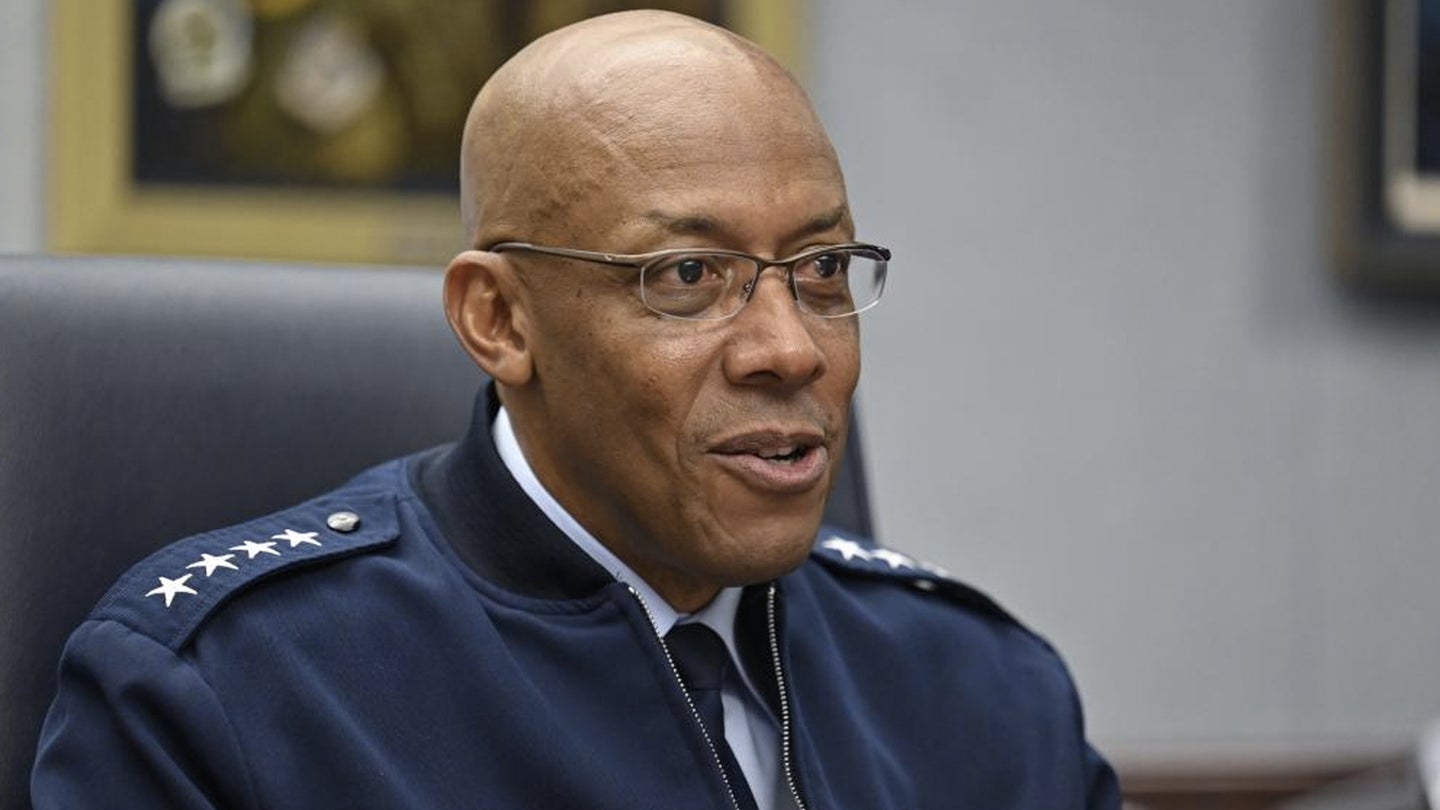 Despite their swaggering Hollywood image, military fighter pilots are trained to be self-critical and evaluate their every shortcoming during post-flight debriefs. The top general in the Air Force, Gen. Charles ‘CQ’ Brown Jr., who spent much of his career flying F-16 fighter jets, showed he still has the knack for not going easy on himself when he gave himself a “solid C” grade for his first two years in the job as chief of staff of the Air Force.

Brown delivered his assessment in a conversation on Monday with Mackenzie Eaglen, a senior fellow at the American Enterprise Institute, a Washington-based think tank. Specifically, Eaglen asked the general to grade himself on how he is implementing “accelerate change or lose,” the mantra that Brown has repeated throughout his tenure as chief of staff. Brown argues that the Air Force needs to be more nimble and quick to adapt to new situations if it hopes to win a fight with China or Russia.

“I’d give it a solid C in some areas,” he said on Monday, as first reported by Air Force Magazine. “I’m a ‘C’ student if you look at my GPA from college, but it’s not due to lack of trying.”

Brown said that he senses from his conversations with airmen that the rank and file feels “the energy and the need to change.” But the general acknowledged that the kind of institutional change he’s hoping to create in the Air Force will probably take more than two years to come to fruition.

“As I came into this position, the mentoring I got was ‘you’re going to pick something that’s going to take you four years to do in a four-year job like this,’” Brown said. “A culture shift sometimes takes time, so you’re not going to be able to flip a switch and make everything move forward.”

Specifically, the general said that both he and lower-ranked airmen are frustrated with the Air Force bureaucracy that can “slow ourselves down.” How to fight that? Do it anyway, but carefully.

“What I’m encouraging [airmen] to do is move in a direction and in some cases ask for forgiveness, don’t ask for permission, but make smart risk assessments as we do this,” Brown said. “That’s the level of trust I have in them … when I go out and talk to them, I go ‘I trust you,’ just communicate what you’re doing and then I’m going to do my best to provide you the intent the resources and the authority to be able to execute what I’ve asked you to do and what the nation’s asked you to do.”

Brown’s mantra and directive of “accelerate change or lose,” and some of its associated concepts, like agile combat employment and multi-capable airmen has received some criticism from airmen. For example, multi-capable airmen is a concept where Air Force members learn multiple skills outside their main specialty so they can help stand up remote air bases in the Pacific or another theater. While it’s a good concept on paper, some airmen worry that it could be taken advantage of by irresponsible managers like a fresh coat of paint on the old saying “do more with less.”

Still, many airmen have taken up Brown’s cause of “accelerate change or lose,” by creating new uses for existing Air Force platforms and technology. For example, over the past year, pilots and crew of the legendary A-10 Warthog close attack jet came up with a way to keep the 50-year-old slow-moving jet a vital asset in an era of fifth-generation stealth fighters by using it as a flying truck for air-launched decoys and cruise missiles.

“Imagine a rapidly-deployable force of non-nuclear fighters that can operate from the most austere locations with a minimal footprint while providing long range fires, decoys, electronic attack, and mission support,” wrote A-10 pilot Maj. Maurice “SPAWN” Grosso in an op-ed about the effort for Task & Purpose. “That vision is achievable at minimal cost by using assets and capabilities that the Air Force already has, but simply needs to integrate. That is what stand-off weapon integration on the A-10 can provide to combatant commanders.”

In a similar vein, airmen have also experimented with launching cruise missiles from C-130 turboprop cargo planes and B-2 stealth bombers and using MQ-9 Reaper drones with fewer airmen than ever before to coordinate intelligence over the Pacific. These new initiatives could provide commanders with more options in a conflict, but only if they are allowed to pick up steam. For example, Grosso said he and his team were told “no” “at least 50 times,” while building their idea of launching decoys and cruise missiles from an A-10. Brown hopes putting greater trust in airmen will overcome that kind of bureaucracy.

“Our talented airmen … are key to cutting unnecessary bureaucracy, recognizing and understanding our competition, and thinking of creative ways we can reshape the design of our Air Force,” the general wrote in one set of action orders.

Another thing that helps airmen redesign the Air Force is having enough money to meet basic needs, which has proven a challenge lately amid rising inflation and property prices. These economic changes have led to financial hardship for many service members and their families. Eaglen asked Brown about that issue, and the general admitted that “some of our processes are probably not as responsive as they could be” to address inflation. For example, the price of rent has increased dramatically at locations across the Air Force, and while the department has done “some temporary things” to help employees there, “it’s something I do know we’ve got to look at,” Brown said.

Brown called for making the Air Force’s financial system more responsive to changes in the economy, but not too responsive so that it behaves like “a roller coaster.” This challenge, along with other issues such as the branch’s recruiting crisis, pilot shortage, next-generation fighter concept, and how to conduct search and rescue in a fight with China or Russia, probably won’t be solved any time soon, but Brown still has two years to help move in that direction. The general said he was grateful for the partnership of the Secretary of the Air Force Frank Kendall III to help work on those challenges.

“I could not ask for a better partner in areas, and the expertise he has to help myself and the rest of the Air Force drive change,” Brown said. “It’s very positive in a lot of areas.”