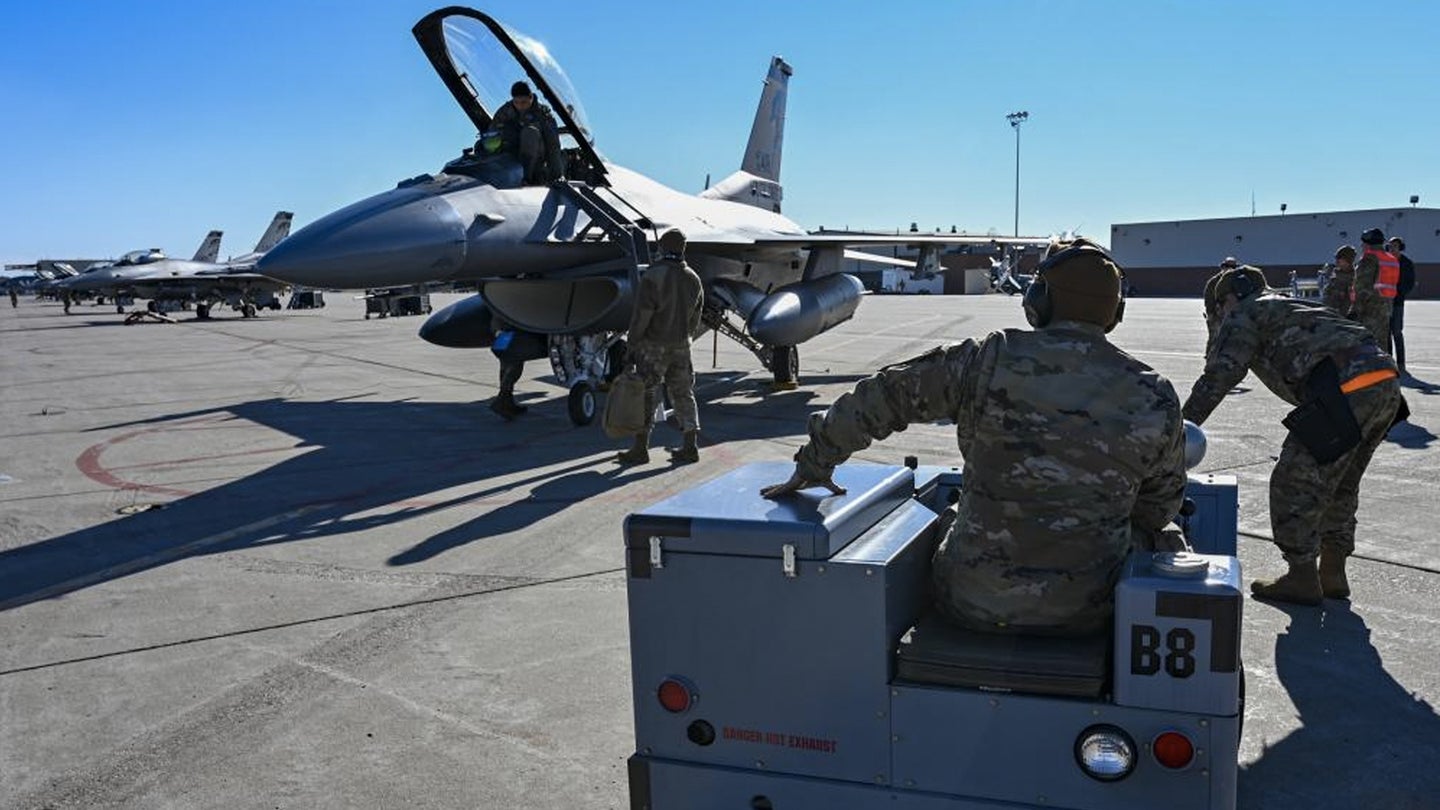 Members of the 114th Aircraft Maintenance Squadron weapons shop, performs and integrated combat turn (ICT) at Joe Foss Field, S.D., Nov. 5 2022. During ICTs the 114th weapons shop aims to recover, reload and relaunch two aircraft with as few people as possible and get them back into the fight as quickly as possible. (Tech. Sgt. Luke Olson/U.S. Air National Guard).
SHARE

An Air Force jet is a complicated machine that takes an entire symphony of specialists working in concert to keep it ready for a mission. With regards to combat aircraft, one group of airmen puts their blood, sweat, and tears into making sure that when an aircrew member presses the pickle button, the right weapon comes off the rails in the nick of time.

That group is Air Force Specialty Code 2W1: aircraft armament systems, also referred to as “weapons” or “armament” — and you could say that their job is the bomb.

“Weapons is a lot more than just going out and putting a bomb on a jet,” said Chief Master Sgt. Michael Peterson, weapons manager for the South Dakota Air National Guard’s 114th Fighter Wing, in a recent press release. “It’s the complex troubleshooting of the weapons systems to give pilots the confidence to pull the trigger.”

As Peterson notes, weapons airmen are responsible for not just moving heavy, dangerous ordnance across the flight line and hanging them from a jet. They also maintain the launch and release devices on the aircraft, which cannot fail even if the pilot has been flying through bad weather, heavy G forces, or any other tough conditions found in the wild blue yonder.

“High speed jets can’t simply ‘drop’ bombs, as the vacuum created on their undersurface could prevent separation of the bomb from the jet,” according to the Air Force Reserves recruiting website. “These aircraft employ sophisticated suspension, launch and release systems in order to effectively deliver bombs, rockets and missiles, including the use of electronically activated explosive devices to launch the munitions away from the aircraft.”

The weapons could include anything from a long-range air-to-air-missile; a 2,000-pound laser-guided bomb, or the hundreds of rounds of 20 mm ammunition fired from the gatling gun of an F-16.

“These weapons weigh upwards of 500 to 2,000 pounds. We can’t pick it up by ourselves, which is why we have a jammer,” said Airman Immanuel Bailey, an aircraft armament systems technician for F-35 jets at Nellis Air Force Base, Nevada, in a recruiting video about his career field. A jammer is a wheeled flightline vehicle that functions a bit like a forklift but for lifting heavy ordnance.

“We use it to pick up the bombs and put it into the weapons station,” Bailey explained. “It can make fine adjustments because the bomb needs to go in very precisely.”

At South Dakota’s 114th Fighter Wing, the weapons shop has four areas: loading munitions on the flight line, repairing and inspecting weapons launchers, the 20 mm gun, and maintaining the F-16 itself, the press release said. Armament systems have wiring, electronics and other tools for keeping the weapons in place, preventing them from accidentally detonating, and firing them smoothly when the moment comes. Weapons airmen have protocols to keep these machines in order, but they must be completed quickly to meet the needs of the mission. To prepare for that, weapons crews around the Air Force often hold loading competitions in front of a live audience to see how well they can perform under the clock.

“The whole key is to do it fast, do it safe and do it reliable,” Master Sgt. Lucian Williamson II, a weapons superintendent at Misawa Air Base, said in an Armed Forces Network video about a load competition in 2016. “This right here is a public demonstration of their skills and allows them to get some head-to-heat competition in, basically show the wing what they can do, and also someone gets to walk away with some bragging rights.”

Weapons airmen may have to move even faster in the near future. The Air Force overall is leaning into a principle called Agile Combat Employment, where the service aims to complicate an adversary’s targeting process by standing up more and smaller airstrips across the theater of operations. Smaller airstrips means fewer airmen and resources at each facility, which means units across the Air Force are trying to figure out how to do their jobs with the smallest possible skeleton crews of airmen. The 114th Fighter Wing just tried it out in drills earlier this month when they practiced integrated combat turns, where ground crews work fast to rearm and refuel a running jet so it can get back in the air as soon as possible.

“During ICTs, the weapons shop aims to recover, reload and relaunch two aircraft with as few people as possible and get them back into the fight as quickly as possible,” Senior Master Sgt. Darren Gillen, 114th Maintenance Group weapons standardization superintendent, said in the press release. “The ACE concept will allow us to be more lethal and less vulnerable by having a smaller footprint and we’ll be more agile to project the fight forward in any location.”

While the press release did not say exactly how few airmen were involved in the drills, weapons airmen in general are not going to miss out on wherever the Air Force’s next fight may be. After all, the motto for the aircraft armament systems career field is “weapons … get some!”