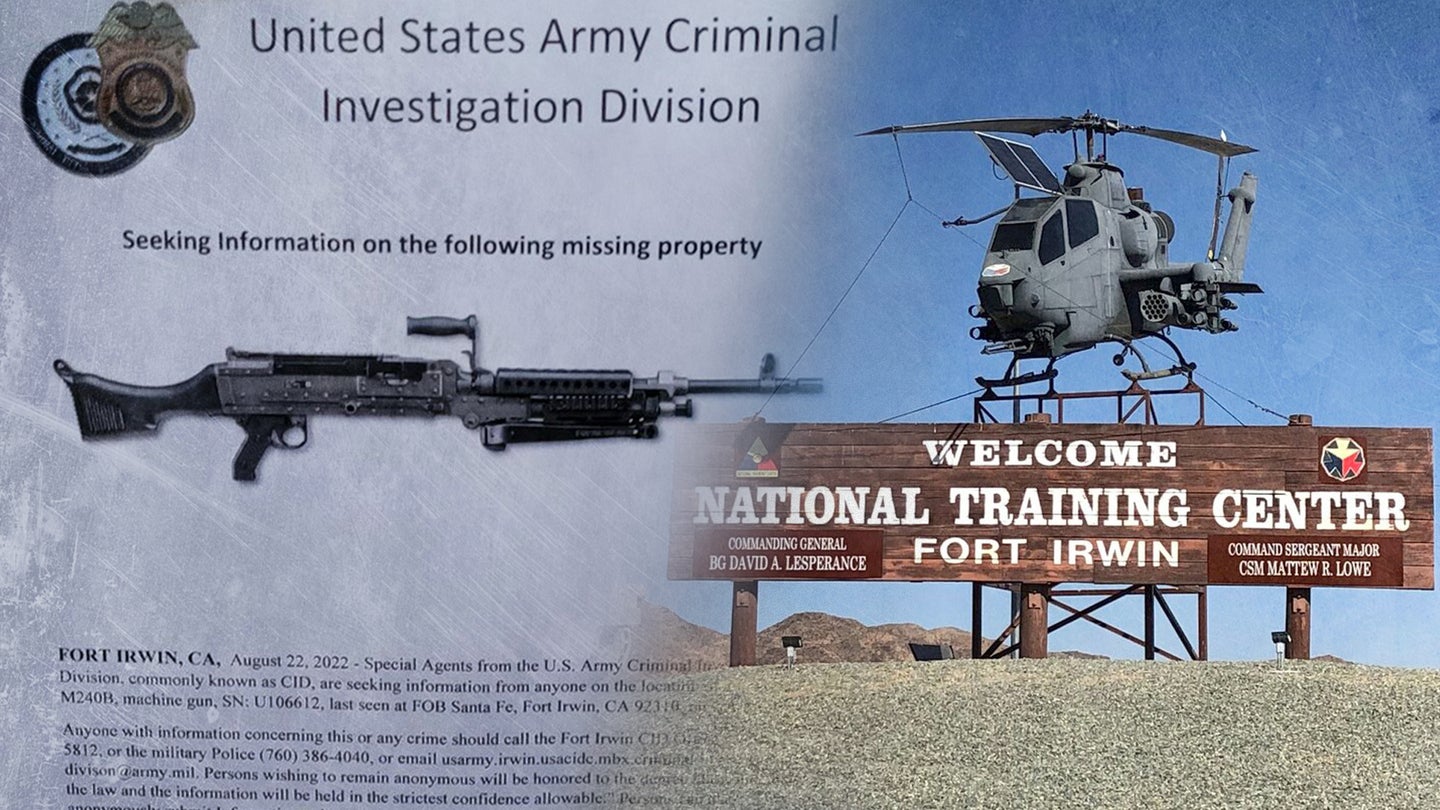 Are you currently somewhere near the Army’s National Training Center at Ft. Irwin, California? If so, have you seen an M240B machine gun? If you have, or you know anyone who has, the U.S. Army Criminal Investigation Division would like to know.

A thread posted this week to the popular Army Reddit forum showed a poster from CID “seeking information on the following missing property,” along with a helpful picture of an M240B.

The poster says that the currently astray crew-served weapon was last seen on Aug. 4.

According to one Reddit user, this particular flyer was posted in the Rotational Units Bivouac Area at Ft. Irwin.

CID did not confirm the details of the post but did say in an email that special agents “have opened an investigation and are seeking information regarding the missing weapon at Fort Irwin, California. Currently, there are no indications of any criminal activity.”

A 2021 investigation by the Associated Press revealed at least 1,900 weapons were lost or stolen from the Army, Navy, Air Force, and Marine Corps from 2010 to 2019, including roughly 1,300 from the Army alone.

When that report was released, it claimed that the Army “sought to suppress information on missing weapons and gave misleading numbers that contradict internal memos.” An Army spokesperson could not confirm the numbers reported by the Associated Press.

Gen. Mark Milley, chairman of the Joint Chiefs of Staff, told Congress however that he was “shocked” by the numbers reported.

Of course, plenty of U.S. military veterans can share horror stories of losing a weapon or having to walk “Hands Across America-style” through a training area when one goes missing. The late Gen. Colin Powell, who would eventually rise to chairman of the Joint Chiefs of Staff himself, even detailed briefly misplacing his own sidearm when he was a young second lieutenant stationed in West Germany.

Earlier this year, an employee at a butterfly conservation center near the Texas-Mexico border happened upon an M-4 in an unlocked Texas National Guard vehicle, an incident that no doubt resulted in a really bad week for at least one hapless guard member.

In late December 2019, two rifles belonging to the 3rd Battalion, 6th Marines went missing in a Camp Lejeune training area, never to be seen again. In what was no doubt a totally unrelated incident, that battalion’s commander and sergeant major were relieved a few months later.

And in 2018, security forces with the 91st Missile Wing at Minot Air Force Base in North Dakota misplaced a box of Mk 19 grenades that fell out of the back of a moving vehicle, as well as an M240 machine gun.

Of course, a box of grenades doesn’t sound so bad when you consider that there are still six Cold War-era nuclear weapons that have never been recovered from accidents.

So if you know the whereabouts of this missing M240, please give CID a call. Your nation thanks you.