Former Air Force Capt. William Howard Hughes Jr. disappeared in 1983, and was found in 2018, but the exact details for why he deserted are still unknown. 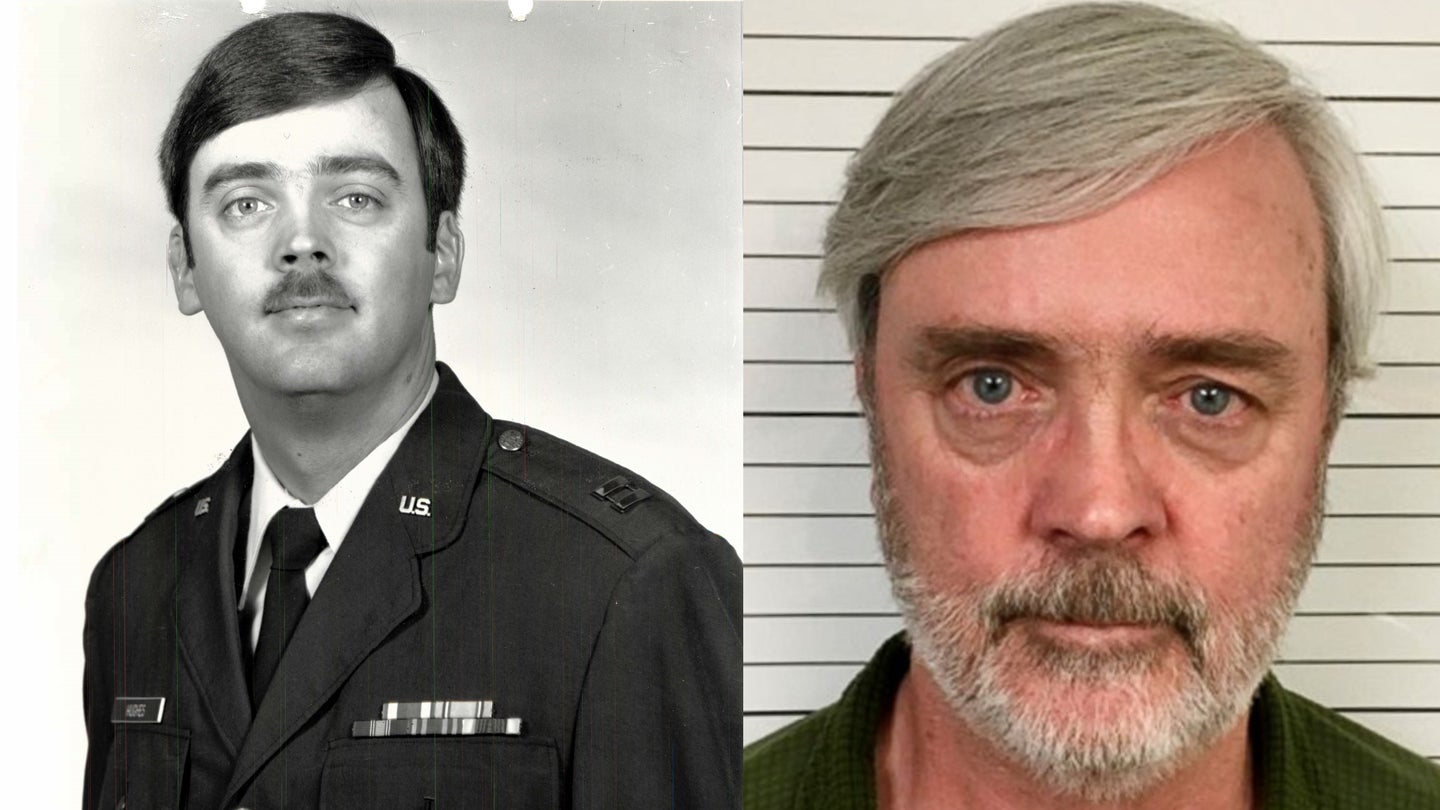 Air Force Capt. William Howard Hughes Jr. disappeared in 1983, was declared a deserter by the Air Force, and was not found until 2018. (Photos via Air Force Office of Special Investigations).
SHARE

Barry O’Beirne’s neighbors and co-workers in northern California knew him as a quiet man who always wore a San Francisco Giants baseball cap, used the treadmill at the local gym, and was generally an alright guy.

“We rooted for the same baseball team, San Francisco Giants,” one neighbor, Steve Devine, told CNN. “I would see him walking through the neighborhood like myself, we were both retired, quick ‘hi how are you.’”

That all changed on the morning of June 6, 2018, when a team of Air Force special agents arrived at the door of O’Beirne’s townhouse in Daly City, a suburb south of San Francisco, and arrested him for desertion. That’s because O’Beirne’s real name was William Howard Hughes Jr., and he had disappeared 35 years earlier while he was a captain in the Air Force assigned to Kirtland Air Force Base, New Mexico. As reported by the San Francisco news site SFGate earlier this month, Hughes’ vanishing act was almost flawless: his family and fellow airmen were taken completely by surprise and had no idea where he had gone for more than a third of a century. His family feared that he had been abducted, while others suspected he had defected to the Soviet Union. The exact reason Hughes vanished remains unknown, but in the four years since his arrest, SFGate uncovered more details about Hughes’ past which shed light on where the airman came from and how his disappearance affected his loved ones.

Hughes’ story began when he was born in 1950 in Seattle, where he had three sisters and where his father worked for the airline industry. In 1973, the 20-something Hughes enlisted in the Air Force, and by the age of 33 he had become a captain at Kirtland. Located in southeast Albuquerque, Kirtland hosts a training wing for Air Force special operations helicopter pilots and research labs for developing new weapons, but its main mission is maintaining and studying America’s nuclear weapons. When Hughes worked there, he was assigned to the Air Force Operational Test and Evaluation Center, which tests new weapons and equipment for the service. His specific duties “included classified planning and analysis of the NATO command, control, and communications surveillance systems,” according to a statement released in 2018 by the Air Force Office of Special Investigations.

The captain bought a “modest” home in Albuquerque near Kirtland and lived alone, SFGate reported. OSI said that Hughes was sent to the Netherlands on July 18, 1983 to work with NATO officers on the operation of Airborne Warning and Control electronic surveillance aircraft. Hughes was due back in Albuquerque on August 1st, but he failed to appear. An investigation showed that he was last seen in the Albuquerque area withdrawing $28,500 from his bank account at 19 different branch locations, OSI said. A search of his home found to-do lists and books to read, and his car was later found at Albuquerque International Airport, SFGate reported. A service member who fails to report for duty is considered absent without leave. If the service member is AWOL for 31 days, their status is changed to ‘Dropped From Rolls,” a.k.a., desertion. On Dec. 9, 1983, 130 days after Hughes was supposed to arrive back at Albuquerque, the Air Force formally declared him a deserter.

Hughes was not just any airman: the captain had a Top Secret/Single Scope Background Investigation clearance, OSI said, though he had access to only U.S. Secret and North Atlantic Treaty Organization Secret information. Still, this was the Cold War in the early 1980s, where nuclear war with the Soviet Union threatened to wipe out life on Earth at any moment. Just that fall, NATO and the USSR escaped nuclear war largely by accident when an Air Force general decided not to escalate in response to news that the Soviets were on high alert in reaction to NATO military exercises in Europe.

“We may have inadvertently placed our relationship with the Soviet Union on a hair trigger,” according to a 1990 report on the incident, known as Able Archer 83 written by White House advisors. “The U.S. intelligence community did not at the time, and for several years afterwards, attach sufficient weight to the possibility that the war scare was real.”

There was also a history of Americans with access to classified material defecting to the USSR. Foreign Policy noted in 2013 that that history included George Koval, who passed information about the Manhattan Project to the Soviets in the 1940s; and National Security Agency cryptologists William Martin and Bernon Mitchell, who had insight on U.S. monitoring of Soviet communications. When asked in 1984 if Hughes may have defected, an Air Force captain told the Arizona Journal “that has to be an option,” according to SFGate. The FBI played it more conservatively, telling reporters that “there is no indication of espionage at this point.”

Hughes’ sisters refuted the notion that their brother had defected to the Soviets. Christine Hughes said the disappearance was “totally out of character for the Bill we knew,” SFGate found. “We do not feel he disappeared voluntarily.” Hughes’ family said the captain was “a brilliant, dedicated man who phoned his parents regularly” before he disappeared, SFGate wrote. A statement written by the family also said that they had planned a family union that fall, and Hughes was fastidious about telling his family his whereabouts.

The military, police and international agencies tried to find the missing airman, but he remained unaccounted for. In the military, desertion is a serious crime that can be punished by death in a time of war. Still, only one U.S. service member since the Civil War, a soldier named Private Eddie Slovik, has ever been executed for desertion. Though the Uniform Code of Military Justice says nothing about punishing a deserter’s family, it seems they bear the brunt of the damage. A year after Hughes’ disappearance, Christine told the Seattle Times, that “the holidays are the worst time, we make sure we’re together to try and help each other through.”

But according to one reporter, Hughes’ name was still on the minds of U.S. intelligence officials. In 1986, Tad Szulc, an acclaimed reporter credited with first reporting the CIA’s involvement in the 1961 Bay of Pigs invasion of Cuba, wrote an article saying that U.S. intelligence officers believed Hughes may have had something to do with recent high-profile rocket ship explosions. In 1985, a French rocket blew up shortly after liftoff, and in 1986, the Challenger space shuttle exploded shortly after liftoff over Florida, killing the 7 crew members aboard. Both the Challenger and two other spacecraft which failed around that time were carrying U.S. surveillance satellites, and those failures meant the U.S. could not keep an eye on Russia’s nuclear deployment, SFGate reported.

Szulc’s Pentagon unnamed sources saw “a clear link between Hughes and possible sabotage of the American and French launches,” the reporter said in his Los Angeles Times article. “He is worth his weight in gold to the Russians.”

Despite the provocative allegation, Hughes’ name, like the man himself, disappeared from any form of news coverage between 1987 and 2017, SFGate wrote. What eventually led to Hughes being discovered was not espionage or treason, but passport fraud. On June 5, 2018, special agents from the State Department’s Diplomatic Security Service interviewed a man living in Daly City named Barry O’Beirne during a passport fraud investigation.

“After being confronted with inconsistencies about his identity, the individual admitted his true name was William Howard Hughes Jr., and that he deserted from the U.S. Air Force in 1983,” OSI wrote in 2018.

Hughes said that in 1983 he was depressed about being in the Air Force, so he left, made up his new name and life as O’Beirne, and lived in California ever since. The San Francisco chronicle reported in 2018 that he had also lived in San Diego, El Cajon, Brisbane and other cities in California before winding up in Daly City. SFGate reported that he had even married a woman who took his fake last name and then filed for a marriage annulment two months after Hughes’ arrest. Hughes had also worked as an actuary and consultant for the University of California in Oakland, where he represented the UC system in labor negotiations and had a reputation for being cheerful and sociable, according to the San Francisco Chronicle. In fact, one of O’Beirne’s colleagues, San Francisco attorney Judy Boyette, chose him to represent the UC system in negotiations because “he could relate to everybody,” she told the Chronicle in 2018.

“I wanted to send someone I thought the union could trust — and they did,” she said. “He was very likable.”

Likable or not, it’s not clear if the long-lost Hughes brother ever reconnected with his family, SFGate reported that his siblings have not spoken publicly since the arrest. Hughes was taken to nearby Travis Air Force Base. He was found guilty of desertion, sentenced to 45 days in military prison and lost an appeal a month later, SFGate reported. His current whereabouts are unknown.

As strange as Hughes’ disappearance and reemergence are, he’s not the only airman to vanish without a trace. In 2016, there were 62 Air Force deserters who remained unaccounted for, OSI reported. The oldest of those deserted in 1967, and he would be 93 years old today, though the Air Force did not share his name in the press release. The most recent alleged Air Force deserter left an Army installation in Korea in 2014, OSI noted. Investigating desertion and fugitive cases is the job of OSI’s Cold Case Investigative Team.

An Air Force Personnel Center employee named Sandra Kolb said in an OSI news release that when an airman becomes a deserter, they and their dependents lose all pay and benefits entitlements, including medical and dental care and housing.

“OSI will continue to search for every fugitive until each member is returned to military control. And, we will find them,” OSI Cold Case Team lead John Fine said in the news release.