A heartfelt message from a military wife and caregiver has quickly become an inspiring example of how social media can... 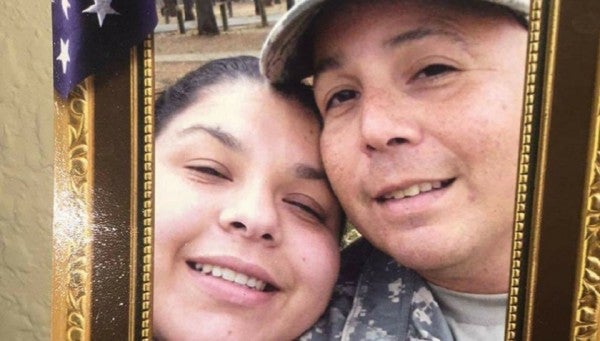 A heartfelt message from a military wife and caregiver has quickly become an inspiring example of how social media can truly serve as an incredible mechanism for real good.

Lee Hernandez, 47, served in the Army for more than 18 years. He suffers from a debilitating condition that was deemed terminal after three brain surgeries failed to identify the cause. With Lee now in hospice care at home in New Braunfels, Texas, Hernandez’s wife Ernestine contacted the advocacy groups Caregivers of Wounded Warriors and the Arizona Veterans Forum with a request for phone calls and texts, along with Lee’s phone number.

It was simple but tragic request: Her husband’s dying wish is to hear from you.

The July 11 Facebook post on the Arizona Veterans Forum page immediately went viral and an outpouring of support flooded in. In a matter of days, Lee received more than 100,000 texts and numerous calls from strangers who shared their own stories, kind words, gratitude for Lee’s service, and notes of encouragement.

Eventually, the high volume of messages became overwhelming. To lighten the load, family friend Susan Frawley started the Facebook page Team Lee!!! American Hero Support Group, as a way for supporters, veterans, and service members to reach out to the couple.

Though the strokes left Lee blind, he brightens up when Ernestine reads the messages to him.

Related: How You Can Grant This Dying Army Vet’s Final Wish With Just A Text »

“We started the Team Lee Support page so people could leave messages for Lee, because it’s overwhelming, it’s good, but there needed to be a place for people to reach Lee, which could handle the high volume of messages,” Frawley, who is also a military caregiver for her husband, a Marine veteran, told Task & Purpose.

“The response has been overwhelming and positive and there have been people on there sharing their own stories with Lee,” she added. “Lee looks stronger, and it has cheered them up. They don’t feel so alone. They know that there’s people out there who have their backs.”

Lee, has been battling with health issues for years, but hit “rock bottom” over a year ago, Ernestine told Arizona Central, adding that her husband’s “strong will keeps him going.”

According to a Facebook post by Frawley on the Team Lee!!! American Hero Support Group, the Elizabeth Dole Foundation, which launched the Hidden Heroes campaign to support military caregivers like Ernestine, is taking over media queries for the Hernandez family.

“The Hernandez’s story captures something beautiful that is happening every day within this community,” the foundation told Task & Purpose.“No matter where they live or what their background may be, these spouses, mothers, dads, siblings, and other loved ones are united by the strongest of bonds, their care for wounded warriors at home.”

In addition to the Facebook page, Frawley created a GoFundMe campaign on July 16 to raise money for Lee and Ernestine to travel and enjoy the time he has left, and the campaign has nearly reached its $3,000 goal.

“We don't like saying that Lee's time is short, but the doctors have said that there is nothing else they can do for Lee and he is home on hospice,” reads the message on the page. “Our goal is to fill this season of his life with all the joy that we can.”