Nazis in America are holding torch rallies, killing protesters, and hanging out with other losers of U.S. wars this week,... 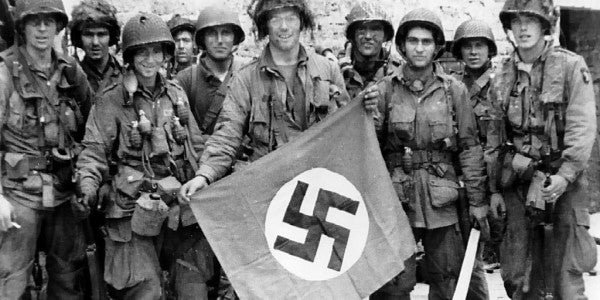 Nazis in America are holding torch rallies, killing protesters, and hanging out with other losers of U.S. wars this week, begging the question: What is the appropriate way for a patriotic American to display the unmistakable, swastika-bearing flag of Adolf Hitler's Third Reich?

Fortunately, the United States armed forces — safeguards of so many American customs, traditions, and courtesies — have a longstanding tradition on how to display the Nazi flag, too. Here are 14 examples to guide you. Why 14? Because that's as high as American Nazis can count.

Have huge goddamn machete, will travel.

American soldiers of Patton's Third Army standing in front of their Sherman tank while rolling up a Nazi flag they have taken as a trophy after the capture of Bitberg.

“This'll look good in our museum of kicking fascist asses!”

Pfc. T.H. Risener and Pvt. B.H. Sargent use a Nazi flag to clean their anti-aircraft gun at Normandy.

“Careful, don't get any anti-Semitism on the firing assembly.”

Veterans who fought the Germans in the Ardennes, holding a captured Nazi Swastika, toured the Sixth Service Command, urging war workers to increase the output of vital war supplies, March 1, 1945.

Nothing brings Americans together like hating Nazis. Those guys suck hard.

A platoon from the 276th Inf. Reg., US 70th ID, celebrates its war booty after crossing the Saar River in a rehearsal near Grossbliederstroff, France.

Here comes Mr. Steal Yo Girl, Yo Flag, And This Photo Of Yo Busted-Ass Führer.

A group of unidentified U.S. soldiers, reportedly at Normandy, takes a break from killing Nazis to pose with their captured flag.

I mean. Have you ever felt this sense of accomplishment?

Even sailors — and combat correspondent John Steinbeck, lower right — got into the “Hey check out this loser flag we took off those losers” selfie game.

“Rough and tough Wisconsin rangers, who helped storm Normandy beaches on D-Day and who had important assignment in capture of Brest, pose with Nazi flag and other souvenirs.”

Your master race got owned by a bunch of Rangers from Wisconsin, bruh.

U.S. Third Armored Division soldiers in the Battle of the Bulge with a captured Nazi battle flag.

What's badass? Taking a victory photo in weather that's as cold as your feelings for Hitlerism.

Donald S. Frederick, of the First Army Ranger Battalion in North Africa, will steal your dumb DIY Sicilian Nazi flag and take pictures with it after you are dead, dead, dead.

This is an acceptable manner of display, too.