The Punisher, Marvel’s Baddest Veteran, Is Back With Some Brand New Gear 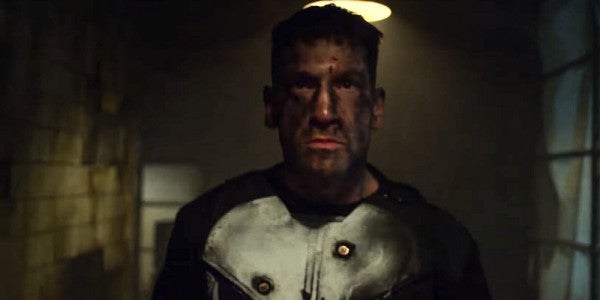 A new promo trailer for forthcoming Netflix super hero mash-up The Defenders just dropped, and while Marvel icon Stan Lee delivers a pretty inspiring monologue as each of the series’ principal characters — Daredevil, Jessica Jones, Luke Cage, and Iron Fist — get a moment in the spotlight, the real standout star has just two seconds of screen time.

I’m talking about The Punisher, the legendary anti-hero currently portrayed by Jon Bernthal. And although Bernthal first appeared in the second season of Daredevil, this new teaser marks the first time Frank Castle shows up with his iconic leering white skull body armor — with a pair of slugs embedded in the chest plate — to deliver a single line: “Looks like I got here just in time.”

Based on the July 20 trailer, it’s unclear if Castle, a former Force Reconnaissance Marine turned gun-toting murder-machine after his family was killed, will have a cameo in The Defenders, but it seems likely. What is known, however, is that The Punisher will get his own show on Netflix, slated to air sometime this year.

Related: No, Cops Shouldn’t Be Rocking The Punisher Skull »

As one of the few veterans in the Marvel Universe whose military service is still crucial to his identity — yeah, yeah, I know, Captain America, Deadpool, and Wolverine, among others, were also in the military — Castle’s time in uniform is more than just an addendum to his backstory, or an easy way to explain his proclivity for firearms. It’s a defining feature of who he is, and that, combined with his all-or-nothing approach to dealing with bad guys has made him a sort of cult comic book icon in the military community.

“He takes with him a military code for accountability and responsibility and he is very much an objective oriented person,” Gerry Conway, one of The Punisher’s original creators, told Task & Purpose in a March 2016 interview. “There’s not a lot of room for nuance when you’re in a firefight. … He in that sense has a certain appeal.”

So if you’re as stoked as we are to see Frank Castle dish out punishment — not justice — you’re in luck. Like the man said: He got here just in time.