Why I Challenged Donald Trump To Release His Tax Returns

For over 40 years, every presidential hopeful has released his or her tax returns; this is the baseline standard. Tax... 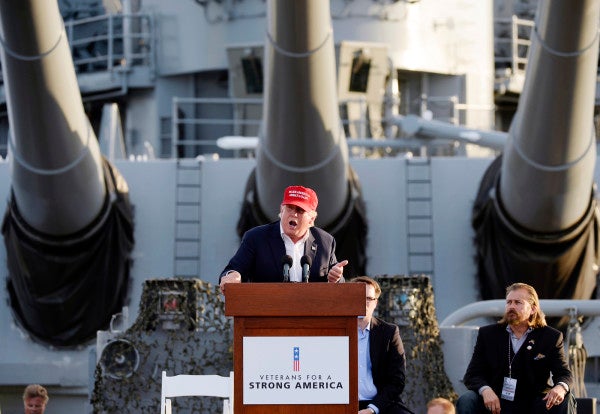 For over 40 years, every presidential hopeful has released his or her tax returns; this is the baseline standard. Tax returns are a significant mechanism of transparency showing how a person makes their money, who and where it comes from, what organizations they are affiliated with, and who they give money to. More importantly, it is a way for our highest office seekers to build trust with the American public.

As a billionaire with financial dealings around the world, Republican presidential candidate Donald Trump should make public any positions that would pose a conflict of interest and risk the national security of Americans. Tax returns reveal that information.

Every election cycle, candidates spend billions of dollars in advertising, but none of that money goes to the issues I care about. I decided to change that by challenging the status quo. I started a campaign to raise money that will be donated to 10 different veterans groups if Trump releases his tax returns. The premise of the campaign is simple. As voters we are entitled to the best possible information to make our decisions. Mike Pence, Hillary Clinton, and Tim Kaine have all released 10 years of tax returns to the American public. So all things equal, I think Trump should too.

So far we’ve raised over $400,000 in small donations, and even had the founder of LinkedIn jump on board promising to multiply our donations up to $1 million by five. In less than 20 days, I’ve raised over $2.4 million for 10 different veterans groups.

Joining the military is an important event for many reasons, not least because we are voluntarily standing up for what we believe in. We volunteer to sacrifice our blood, sweat, tears and even our lives to defend those beliefs, however different they may be. We carry the burdens of that sacrifice and the commitment to those beliefs for the rest of our lives. For this commitment and sacrifice I will always respect the opinions of servicemembers and veterans.

Any service member who has ever held a security clearance has been subjected to a rigorous background check for good reason.

The nation’s defense is dependent on this small group of talented and determined patriots. And in return for this responsibility, the nation asks for honesty and integrity. Yet, when service members undergo background investigations for security clearances, it's about more than just virtues of integrity and honesty. From a very practical perspective, it is about conflicts of interest. The government seeks to determine if there are any relationships that would jeopardize one’s ability to safeguard our nation’s secrets. They answer important questions, like “Do you or your immediate family have any international affiliations? Do you have any risky financial positions or debt? Have you had lapses in judgement due to alcohol or drug use?” All of these are things that could be exploited by our adversaries.

It is one thing for a service member who holds top secret information to undergo a background check, it is another thing for the person who commands the nation’s military to reveal his conflicts of interest. What’s more, everyone who has ever served knows and appreciates the value of standards. To be the commander-in-chief of this group, Trump should be held to similar standards.

My campaign makes this an easy sell to Trump, who claims to love veterans. If he releases his tax returns before the final presidential debate, then all of this money will be donated to these charities. This is a win-win: Veterans’ groups receive money people would not have given otherwise and Trump gets more credibility. But the website functions on ‘pledges,’ meaning that donors only get charged if Trump releases, creating an obvious incentive. During last night’s debate, Trump admitted that he isn’t opposed to releasing his tax records. That makes this a highly promising fundraiser.

Ultimately I find myself standing up once again for the things I believe in, albeit lacking in the discourse today, the standard of integrity from our leaders. This election has brought out the worst in America, with imperfect candidates arguing over each other’s flaws. I see my fellow veterans caught not in questions of politics, but of personality and popularity. I find myself distracted from the issues by scandals and talking heads.

As an independent voter, I am tasked with making up my mind with less and less substantive evidence. I have to remind myself what I believe in. The answer is a simple one: taking care of my brothers and sisters to the left and right, regardless of their personal political beliefs, is what matters to me. I challenge Donald J. Trump to support these brothers and sisters, not by sacrificing his blood, sweat, tears, or money, but by giving something to Americans far more valuable: the truth.