"This confinement appears to be simply for messaging, retribution and convenience." 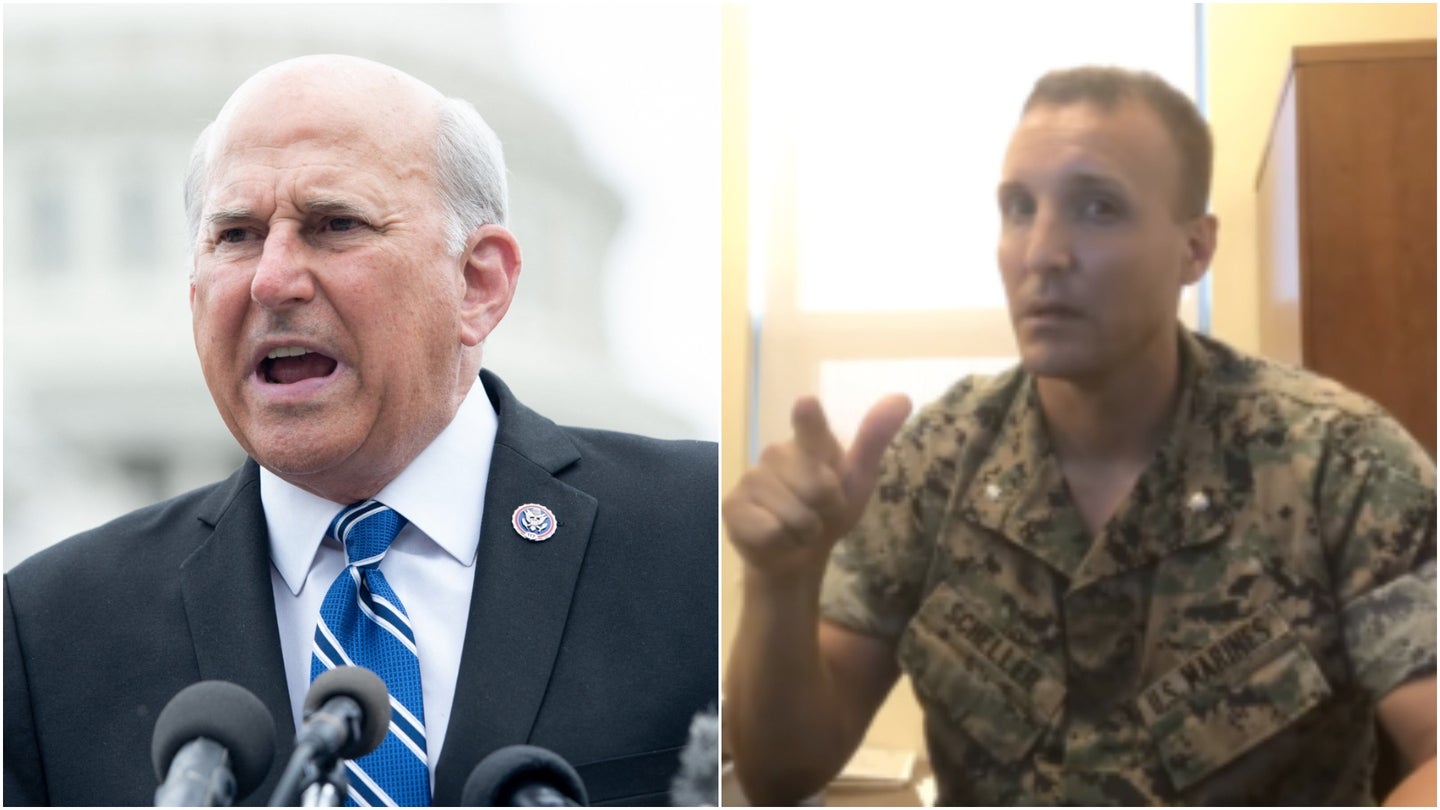 More than two dozen members of Congress signed a letter demanding that the commandant of the Marine Corps release from the brig Lt. Col. Stuart Scheller, the former battalion commander who went viral for criticizing his chain of command.

Scheller was placed in pre-trial confinement on Monday and accused of violating four offenses under the UCMJ: Article 88: Contempt toward officials, Article 90: Willfully disobeying a superior commissioned officer, Article 92: Failure to obey an order, and Article 133: Conduct unbecoming an officer and a gentleman.

In their letter to Marine Gen. David Berger, 27 Republican lawmakers cited several of the military’s rules for court martial — namely that the confined service member’s commander must demonstrate that the service member will skip the trial or break other laws if released. In the letter, they suggested that Scheller’s pretrial confinement “appears to be simply for messaging, retribution and convenience in flagrant violation of RCM 305(h)(2)(B), ‘a person should not be confined as a mere matter of convenience,’” they wrote, referring to the military’s rules for court martial.

Scheller’s father told Task & Purpose that his son’s superiors had told him to stop speaking out, a demand which the Marine had violated.

“They had a gag order on him and asked him not to speak,” Stu Scheller Sr. told Task & Purpose. “He did, and they incarcerated him. They don’t know what to do with him.”

In their letter, lawmakers said there was no reason to confine the younger Scheller.

“Given his excellent record and more than 15 years of dedicated service, we do not believe and have seen no evidence that LTC Scheller poses a grave risk of criminal misconduct,” the representatives continued, before urging his release into “the least restrictive form of housing.”

For his part, Scheller said he was “willing to continue his time in the brig in order to provide peace of mind to the command while allowing for negotiations to secure an honorable departure,” according to his attorney, Brian Ferguson.

“The staff at the Marine Brig are treating the LtCol well,” Ferguson told Task & Purpose. “He appreciates all of the Marines working the facility.”

“People are upset because their senior leaders let them down, and none of them are raising their hands and accepting accountability or saying, ‘We messed this up,’” Scheller said in his initial video, which he posted to Facebook and LinkedIn on Aug. 26. That was the same day a suicide bombing at Hamid Karzai International Airport in Afghanistan killed more than 150 Afghan civilians, 11 U.S. Marines, a Navy corpsman, and an Army special operations soldier.

After the first video began making the rounds online, several others were quick to follow from Scheller. On Aug. 29, he posted a video in which he vowed to resign his commission and proclaimed, “Follow me and we will bring the whole f—king system down.”

Then, in a Sept. 16 video, Scheller pledged to file charges against Marine Gen. Kenneth McKenzie Jr., head of U.S. Central Command. That was followed by a Facebook post in which he said that he would charge McKenzie with 13 specifications of “Dereliction of Duty through Culpable Inefficiency” – one specification for each service member killed in the Aug. 26 attack.

On Wednesday, a Marine Corps official told the Office of Rep. Gohmert that a pretrial confinement initial review hearing would be conducted on Thursday in accordance with the Uniform Code of Military Justice’s rules for courts-martial and overseen by “a neutral and detached military magistrate,” wrote Col. Maura Hennigan, director of the Marine House Liaison Office in an email forwarded to Task & Purpose by Ferguson.

The attorney told Task & Purpose that the defense agreed to delay the hearing until next week, which will “allow both parties to seek a joint resolution of the matter,” he said.

Whatever the results of the pretrial confinement hearing, it remains unclear whether Scheller will face a court-martial. The Marine will go through a preliminary Article 32 hearing, which will determine whether there is enough evidence to warrant a court-martial.

The day after Scheller shared his initial video on Aug. 26, he was relieved of command as the battalion commander for the Advanced Infantry Training Battalion at School of Infantry East at Camp Lejeune, North Carolina. It was a dramatic new stage in Scheller’s nearly 17-year career.

According to his service record, Scheller helped evacuate Americans out of Beirut during the 2006 Israeli-Lebanese conflict, and deployed to Ramadi, Iraq as a company executive officer in 2007. Those deployments were with 1st Battalion, 8th Marines, but he also helped clear roads of improvised explosive devices as an explosive ordnance disposal and route clearance expert supporting the Army’s 101st Infantry Brigade in Afghanistan in 2010.

“He’s asking for the same accountability that is expected of him and his men,” the Marine’s father, Stu Scheller Sr. told Task & Purpose on Monday.