During its annual May 9 Victory Day Parade commemorating the end of World War II, the Russian military brings out the... 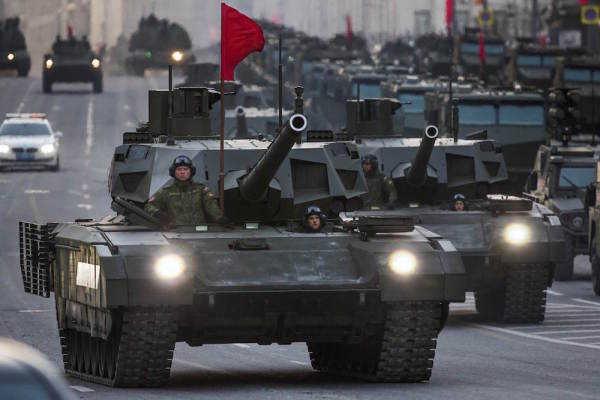 During its annual May 9 Victory Day Parade commemorating the end of World War II, the Russian military brings out the most striking examples of their ground force vehicles. This year, they publicly unveiled what is possibly the most ambitious ground vehicle program since the end of the Cold War. The Armata Universal Combat Platform is Russia’s attempt to make a interconnected family of tanks, infantry fighting vehicles, armored personnel carriers, self-propelled guns, and other vehicles. The centerpiece is the T-14 Armata main battle tank, a radical design that highlights a troubling lack of fighting vehicle development in the West.

The T-14’s biggest departure from traditional tank design isn’t quite evident from photos. The turret is completely unmanned; instead, the three crew members operate the tank in a compartment at the front of the hull. This provides several advantages. There is more room in the turret for armament; currently, the T-14 is equipped with the latest upgrade of Russia’s standard 125mm tank gun, the 2A82A; in addition to the wide variety of Russian armor-piercing and high-explosive shells available, the gun is also capable of firing anti-tank guided missiles. According to the technical periodical, Jane’s Defense Weekly, additional armament could be provided in the form of a co-axial 30mm autocannon and PKT machine gun, giving the T-14 the ability to engage a wide variety of targets. The remote turret could also theoretically allow a single crew member to maneuver and fire the T-14’s weapons, albeit much less effectively.

The turret is notably taller than than previous Russian designs and contemporary Western tanks; a tall profile hinders the ability of the tank to go “hull down” behind cover, a quintessential tactic of armor warfare. But the larger turret could possibly accommodate a larger 152mm main gun, increasing the T-14’s firepower even more. Another possible tradeoff involves the crew compartment; while the front armor of most tanks is often the toughest, the T-14 crew will certainly be the first to know if any rounds do get through. Some designs, like the Israeli Merkava, have moved the engine to the front in order to provide more protection for the crew for exactly this reason.

The T-14 crew may not have to worry, however. In an unprecedented shift to prioritize protection over mobility, which shaped the design of many Soviet tanks, the T-14 will incorporate several active protection systems designed to kill incoming missiles before they even strike the tank. The tank also features explosive reactive armor as an inherent part of the design, providing an increased defense against projectiles. Completing the defense are slat armor panels at the rear, which provide some protection against shoulder-launched anti-tank weapons. The overall armor composition is new, but its makeup is unknown. It is likely similar to the “Chobham” and “Dorchester” composite armor developed by the British Ministry of Defense, putting it on par with tanks used by NATO nations.

The T-14 features a new target and sensor package, including an active electronically scanned array radar suite derived from a fighter jet, enabling the T-14 to track multiple targets simultaneously and provide automatic ballistic solutions to the gunner. The commander has day, night, and thermal optics in a remote systems that also features a machine gun similar to the American Common Remotely Operated Weapon Station.

The T-14’s massive improvements may seem shocking, but the truth is the Russians have pioneered new tank designs for decades. Professor Richard Ogorkiewicz, a armour expert who has studied tanks since the early 1960s, explains in his book “Tanks: 100 Years Of Evolution” that the Russians always considered tanks an important part of ground warfare, whereas the West questioned the future of the tank several times during the Cold War. This was notably seen in the aftermath of the 1973 Yom Kippur War, where Israeli tanks counter-attacking against Egypt and Syria took heavy losses from AT-3 “Sagger” anti-tank guided missiles. Ogorkiewicz elaborates:

On the Sinai front, the successful assault crossing of the Suez Canal by the Egyptian forces was followed immediately by counter-attacks by the Israeli 252nd Division, which ran into Egyptian infantry equipped with an exceptionally large number of Soviet-made Sagger anti-tank guided missiles and failed, losing 165 of its 268 tanks. This immediately led to worldwide rumours that tanks were no longer effective and it took some time for these to be disproved by the evidence provided by the rest of the Yom Kippur War, in which many more tanks were destroyed by the guns of the opposing tanks than by guided missiles.

Western tank development has ebbed and flowed, whereas Russian armored vehicle research remained almost a constant. Several NATO allies have dominated their armored forces in comparison with the Russian Federation, as Ogorkiewicz explains:

… the size of the Western European tank fleet was reduced to a fraction of what it had been. Thus, major Western European armies, such as those of Germany, France, Britain and Italy, were left with no more than about 200 tanks each… But elsewhere tanks have continued to be viewed as a major element of military strength. In particular, the army of the Russian Federation has maintained a fleet of 2,000 to 3,000 modern tanks backed by a reserve of several thousand older vehicles…

That trend seems to have continued. The current American main battle tank, the M1A2 Abrams, is an improved version of a design from 1979. The Abrams is good tank, and the performance of its predecessor, the M1A1, in the Persian Gulf War is often cited as proving its superiority over Russian tanks like the T-72. In the decisive engagement at the Battle of 73 Easting during the Gulf War, one particular troop of 12 M1s destroyed 28 tanks, 16 armored personnel carriers, and 30 trucks in less than half an hour. But as Victor Suvorov, a member of Soviet military intelligence who defected to the West, explains, the Gulf War performance is misleading because the Soviets provided greatly simplified version of equipment for export to foreign nations, called “monkey models.” Suvorov writes:

It is intended that the `monkey-model' approach will be used not only for building tanks, but for all other sorts of equipment-rockets, guns, aircraft, radio sets, etc. In peacetime these variants are turned out in large quantities, but they are only issued to countries friendly to the Soviet Union. I have seen two variants of the BMP-1 infantry combat vehicle-one which is issued to the Soviet army and another which is intended for the Soviet Union's Arab friends.

The “Lion of Babylon” T-72s, used by the Iraqis during Desert Storm, did not necessarily represent the full capabilities of the Russian design, especially given the inferior training of Iraqi tank crews. There’s also the fundamental fact that the T-72 was designed to be a cheap, mass-producible tank in order to ensure numerical superiority against NATO armor in Western Europe.

Therefore, the overmatch the Abrams enjoyed may fast be disappearing. Plans to upgrade the tank to “M1A3” status won’t happen until at least 2020, and its modest changes of upgraded electronics and a lighter 120mm main gun won’t put it on par with the T-14. Tanks from the South Korea and China have leap-frogged the Abrams in terms of fire-control capability. The Army plans to keep the Abrams design until 2050, after the Ground Combat Vehicle program intended to replace many ground vehicles was canceled, itself replacing another canceled program called Future Combat Systems Manned Ground Vehicle.

Even then, upgrading the Abrams presents problems. The M1A3 upgrades assume the 120mm cannon and associated ammo will be sufficient to engage modern tanks like the T-14. 120mm guns are about the heaviest tank caliber able to accommodate a human loader. While the United States has experimented with a 140mm gun, it has never put an autoloading tank into full production. “Upgunning” the Abrams would require a redesign to fit an autoloading system. Then there’s the armor. While it was very effective in 1991, the Abrams’ composite armor has proved vulnerable to IEDs and tandem-shaped charge warheads. There’s also two of the more glaring flaws of the Abrams. Its heavy at over 60 tons, making it difficult to airlift. And it has a gas turbine engine, that while powerful and relatively quiet compared to the diesel option, guzzles gas and limits the tank’s range.

According to reports, the Russian military intends to purchase 2,300 T-14s over the next five years. With the struggling Russian economy, it’s likely that Armata-based vehicles will be offered for export in order to offset the cost. Even if the Russia continues the “monkey model” policy for export gear, a downgrade T-14 could still stack up well against Western tanks, like the Abrams, Leopard 2, and Challenger 2. If the United States and its allies continue to assume their tanks are adequate for future confrontations, they may find out what the Iraqi experience was like at 73 Easting.