There’s a petition calling for a ‘War on Drugs’ medal. Here are 11 other awards also worth considering

Should service members be issued a "War on Drugs" medal recognizing the role the U.S. military has played in combating global drug trafficking over past five decades? One petitioner believes they should. 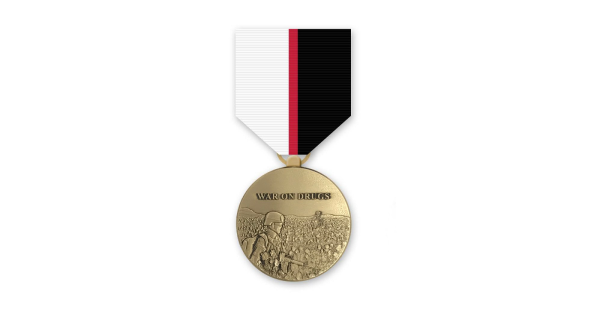 Should service members be issued a “War on Drugs” medal recognizing the role the U.S. military has played in combating global drug trafficking over past five decades? One petitioner believes they should.

The petition calls for the president of the United States, in this case, Donald Trump, to issue an executive order that establishes the “War on Drugs Service Medal” as a “total force” military award that recognizes all service members from 1971 to the present. The White House petition was created by Thomas Marriott, who dedicated the effort to his father, Lt. Col. John Thomas Marriott II, according to the campaign's website.

When asked how such an award would, or could be created, the Pentagon directed Task & Purpose to Volumes 1-4 of Department of Defense Manual 1348.33, writing that those hundred-plus pages have “the language.”

However, the public affairs office did note that “most are established by Law and/or Executive Order,” and that this specific petition “has not been discussed at the Pentagon.”

Marriott's petition, and the accompanying website, appear earnest, and the military has certainly played a significant role in taking on drug traffickers across the globe, from providing training and support to allied militaries, to drug interdiction operations — like that time a Coastie showed off his brass balls by leaping atop a speeding narco-submarine in the middle of the ocean.

However, as much as we here at Task & Purpose love the idea of getting a new piece of chest candy, we're also growing a little tired of endless wars.

In light of that, we came up with a list of 11 other awards we'd like the Pentagon to consider making official, beginning with…

Operation Enduring Clusterfuck Campaign Medal: For all those who served in Iraq and Afghanistan in the early days who are now realizing that this shit is never going to actually end.

Belligerence In Uniform Award: Awarded to E-4s and below who spent four years or more getting chewed out for having 3+ inches of hair on their heads.

Valorous Hands-In-Pockets Medal: Given to those who in the face of overwhelming odds refused to remove their hands from their pockets while getting knife-handed by a squad-sized element of staff non-commissioned officers.

Intergalactic Defense Ribbon: Awarded to the first enlistees of the Space Force.

Meritorious Barracks Legal Ribbon: Awarded to junior soldiers who display prominent legal knowledge without having any type of law degree.

The Content Wars Award: Awarded to any and all former U.S. service members who record at least 10 video rants in the driver's seat of their truck within the first month of separation. Recipients are eligible for 'V' devices if the truck is moving.

National Military Base Housing Ribbon: Awarded to service members (and their families) who endured and survived asbestos, mold and faulty wiring while living on any military installation.

E-4 Mafia Unit Citation: Awarded to members of an Army battalion where 90% of specialists are absent from mandatory morning PT, working parties, and are a constant presence in the smoke pit.