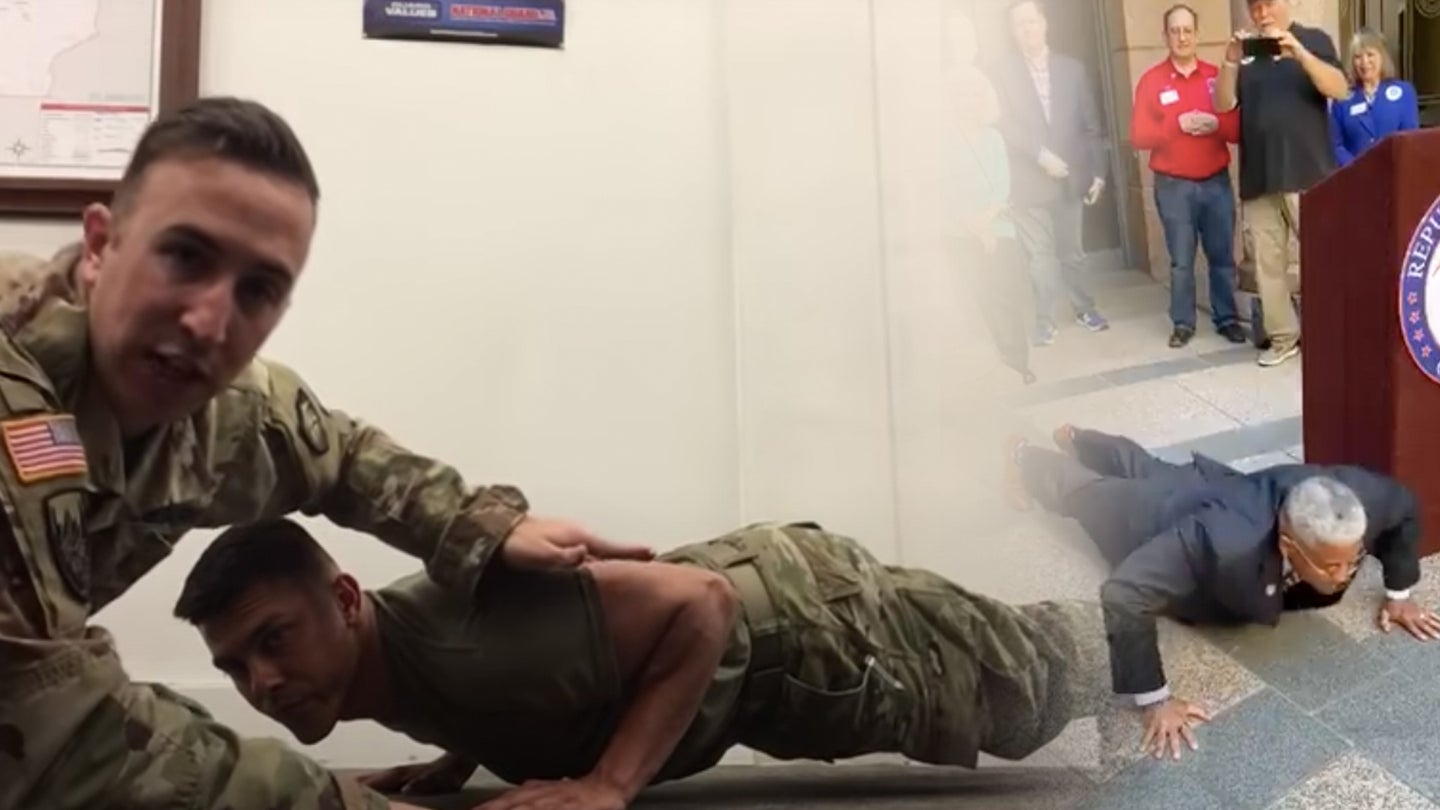 Video evidence shows retired Army Lt. Col. Allen West can move his body as if doing a push-up but it is unclear whether or not he can still do one correctly.

West challenged a reporter to a push-up contest on Wednesday, according to NBC reporter Jane Timm, after the other journalist showed up late to a press conference. Challenging people to push-up contests is apparently totally normal and perfectly appropriate for a 60-year-old man who is now in charge of the Texas Republican Party.

Although the reporter “respectfully declined,” West went ahead and did the push-ups himself. Timm captured the stunt on video and posted it on Twitter, which led to military service members chiming in far and wide to comment on how many push-ups West performed. The consensus: Zero.

West nearly faced court-martial after he brandished a pistol and then fired it near the head of an Iraqi prisoner during an interrogation in 2004. The Army fined him $5,000 instead, and he retired soon after. Now West is a commissioned officer in the Texas State Guard, according to his online biography. And he may need some re-training on how push-ups are carried out.

So, how many push-ups did West do? “None. He’s just dry humping the ground,” said one active-duty soldier who spoke with Task & Purpose. The soldier added that West would have likely been kicked from Airborne School or similar training on the first day over this since instructors likely wouldn’t count any of those reps.

A quick poll of veterans at Task & Purpose who were asked if they would have counted West’s push-ups if they were scoring them in real life yielded the following responses: “No, no, no. Stop.” and “I would not count those. Not down far enough. Dude shoulda taken off the jacket.”

Proper push-ups start by assuming a front-leaning position with the arms on the ground and legs extended. You then bend your elbows and lower your body as a single unit until the upper arms are at least parallel to the ground, according to Army Study Guide, before returning to the start position with your arms fully extended.

Here’s a video of what it’s supposed to look like:

“He doesn’t come up halfway and go back down,” an Army sergeant first class says of a movement similar to that of West’s in the video. “That’s not a real push-up.”

Despite the count going up among supporters of West in the video, had he been in front of a soldier grading his push-ups, he perhaps would have heard, “I want that chest lower than the Earth, son,” or a repeated count of one, one, one — which has a way of delivering an effective message: Your push-ups look like ass and they do not count.

So I’m sorry, sir, but you are a no go at this station.