Army unit urges soldiers to ‘be a hero, eat a pancake’ for sexual assault

Pour on some cringe syrup. 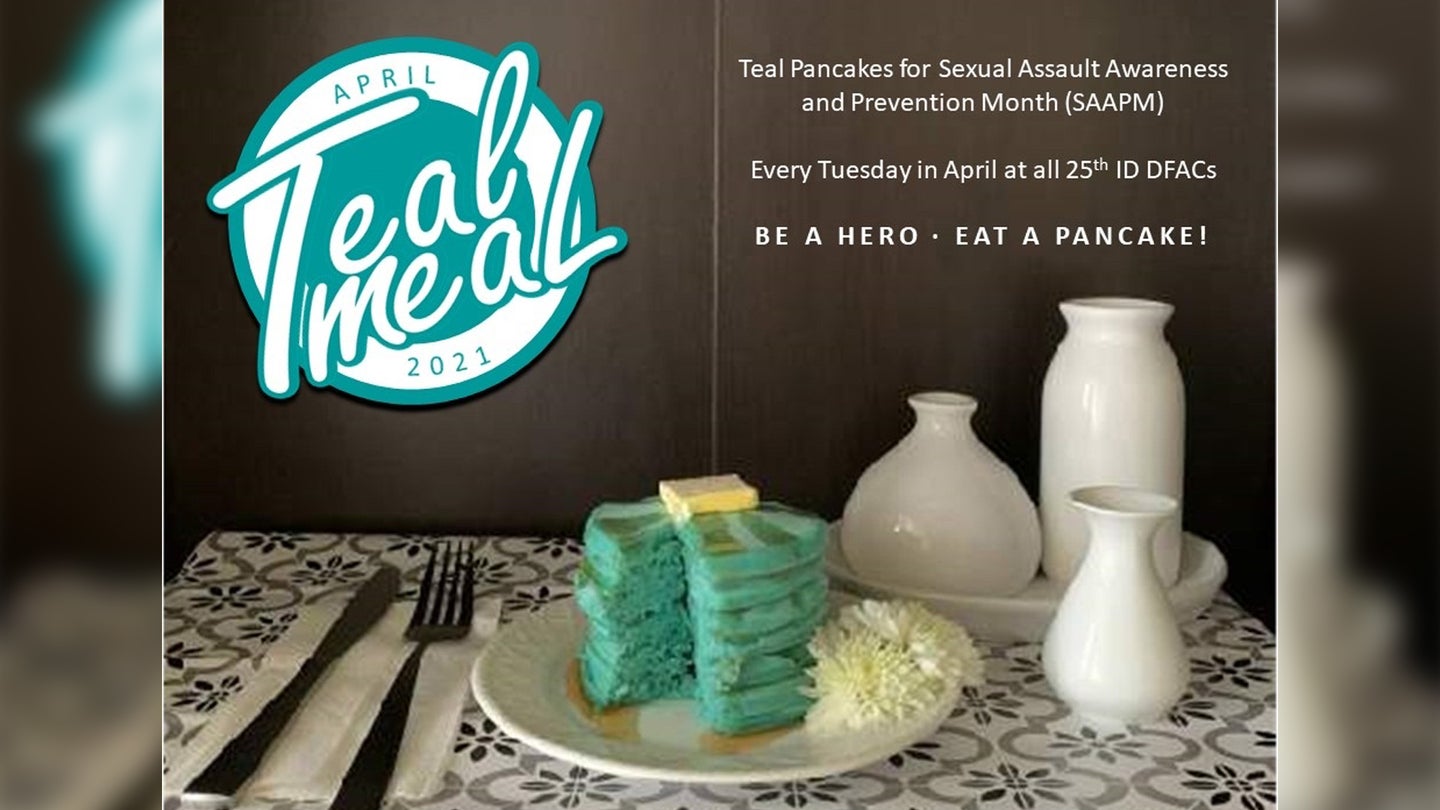 An Army unit in Hawaii thinks that serving teal-colored pancakes at the chow hall is a good way to raise awareness about sexual assault and harassment.

“Stop by any dining facility on Schofield Barracks or Wheeler Army Airfield tomorrow for breakfast and enjoy teal pancakes in support of Sexual Assault Awareness and Prevention Month,” the U.S. Army Garrison Hawaii wrote on Twitter alongside a flyer urging soldiers to “Be a hero. Eat a pancake!”

This is not a Duffel Blog article. Look:

There may be some interesting reasoning as to how eating pancakes can make one a hero in the fight against sexual assault, but the U.S. Army Garrison Hawaii did not respond to questions from Task & Purpose. A spokesman said the ‘Teal Meal’ events were hosted by the U.S. Army Hawaii Sexual Harassment, Response, and Prevention (SHARP) office and the 25th Infantry Division, which did not respond.

The tweet was in honor of Sexual Assault Awareness and Prevention Month in April, which, in its 20th year, is meant to raise awareness and help prevent sexual assault, harassment, and abuse. But many criticized the tweet as trivializing a serious issue.

“I need to scream into a pillow,” wrote one female soldier who tweets pseudonymously as Lethality Jane.

As Jane noted, the timing of the tweet isn’t great: The day before ‘be a hero, eat a pancake’ made its way into the Army zeitgeist, Army Times reported on the shocking case of an Army noncommissioned officer named Randall Hughes who was given a slap on the wrist for raping the wife of a subordinate in 2017. He then went on to assault other victims, including his 14-year-old daughter. (He pleaded guilty and was sentenced to 13 years in prison and a dishonorable discharge in March.) And earlier this month, the Army suspended multiple instructors at Fort Sill amid allegations they sexually assaulted a female soldier going through initial training.

All of that is on top of a tumultuous year for the service, which has come under intense pressure from Congress over the murder of Spc. Vanessa Guillen nearly a year ago at Fort Hood. The Army suspended more than a dozen leaders there after investigators found a toxic leadership environment at the Army’s largest base that was “permissive of sexual assault and harassment.”

“I wish when it came to sexual assault being a hero was as simple as eating some teal pancakes,” said retired Air Force Col. Don Christenson, a former military judge who is now president of Protect Our Defenders, an advocacy group for sexual assault victims. “I’m certain this is well-intentioned, but I’m equally certain many survivors will find this offensive. If the military wants to make real progress they have to start by actually holding offenders accountable.”

As Haley Britzky reported in December, a broken, structurally flawed reporting system at Fort Hood led to “significant underreporting” of assault and harassment since “victims feared the inevitable consequences of reporting: ostracism, shunning and shaming, harsh treatment, and indelible damage to their career.”

So it’s perhaps no surprise that the Army’s sexual assault prevention strategies have not achieved their intended results. That’s not an opinion. It’s word for word what Army officials wrote in the most recent official report on sexual assault in the service, which “continued to see a high rate of sexual assault reports” in 2019.

“This increase is very troubling and shows that the Army’s sexual assault prevention strategies have not achieved their intended results,” the report said. “During FY19, the Army re-examined these strategies in an effort to reduce prevalence and prevent sexual assault,” which included the hiring of more than a dozen experienced sexual assault investigators and other improved training at the Army SHARP Academy.

Also that year, the Army’s Human Resources Command kicked off Sexual Assault Awareness and Prevention Month with a ceremonial cake cutting, which seemed “tone-deaf and insensitive” to at least one battalion commander, who saw both men and women leaders saying they were “baffled” after photos of the event were shared on social media.

“To have a ‘kick-off celebration’ conveys the message that ‘this month we are serious about celebrating SHARP’ instead of the reality that SHARP is not something to celebrate,” she told Task & Purpose in April 2019.

But as our friend Chad Garland from Stars & Stripes helpfully showed in a long Twitter thread of official military cake cuttings and proclamations on sexual harassment and assault, the rest of the military hasn’t gotten that message, either. So enjoy your pancakes, I guess.