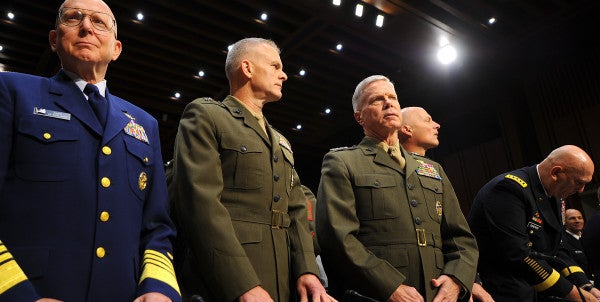 The NDAA does not include a measure championed by several high-profile female lawmakers that would remove authority to convene courts-martial in cases of sexual assault from senior commanders or, apparently, support for almost every other item championed by the Pentagon this budget cycle.

Setting aside the question of how the Department of Defense can be trusted with its own justice system, but can't be relied upon to accurately estimate the necessary requirements for real estate, aircraft, and vessels, or the health of its own service members, this decision promises to be of close interest as the Senate Armed Services Committee returns its own NDAA markup later in May.

And that's what this is – a decision, not a resolution.

The final vote was unsurprising; an initial assessment released in January by the Response Systems Panel offers a strong refutation of the reasoning behind the measure, including the fact that military investigations of sexual assault take place outside of the chain of command, and the decision to convene takes place at a level of command that typically precludes personal acquaintance between the decision maker and the victim and/or subject.

The House NDAA includes several actions that would mitigate the major obstacles victims of sexual assault face. At the same time, it falls far short of offering a comprehensive solution to the problem of sexual assault in the military.

In order to reach this future solution, military personnel and civilians must design and implement change at both the institutional and individual level, as well as answer valid criticisms leveled by lawmakers and victims' advocates who supported the measure.

This would be easier if a successful model of treating sexual assault on any level existed. Instead, the concerns regarding military sexual trauma echo in the White House's newfound focus on campus sexual assault. As with the early stages of the military's response to the problem of sexual assault within its ranks, colleges and universities now must address the parallel lines of popular activism, external pressure, news media support, empowerment of victims to come forward and, hopefully soon, an internal, institutional decision to move toward a solution.

While the civilian criminal justice systems offers a wealth of best practices, both at the federal and state levels, it also offers its own series of cautionary tales, from a judge sentencing a rapist to do community service at a rape crisis center to a federal investigation necessitated by allegations of egregious neglect in local rape investigations.

The reactions of subjects also shed light on the problems faced by the criminal justice system, civilian or military, when attempting to prevent rape. In a highly publicized case involving two football players accused of rape, one of the player's quoted reactions, upon delivery of the guilty verdict, was regret that the event had been memorialized on social media.

When teaching criminal justice to undergraduates, I often used a model of the criminal justice system that included citizens, police, courts, corrections, and enveloping and connecting each of these points on the model with the news media. The actions and reactions of news coverage surrounding cases of alleged rape and sexual assault may contribute to the larger problem, although the reactions of the blogosphere often move quickly to condemn what are increasingly seen as outdated, victim-blaming reactions.

My hope is that this decision will not be seen as a setback, a reason for advocates to lose hope, or an indication that the system is just fine the way it is. The real resolution probably won't be the result of a flashy fight across the headlines. It will happen – is happening – when the institution signals a change, when actual research into law enforcement, evidence-based practices is used to inform the institutional response, and when systems are put in place to gain the buy-in necessary to begin implementing change at the individual level.

Systems do not change without buy-in from all members of the institution – just ask a command team that has lost the trust of its troops. Sexual assault is part of a larger socio-cultural problem, and in order to solve it, all stakeholders must understand how long the road is, and how many lanes there are to travel. Therefore, the question remains: If this decision is not the final solution, then what are we doing to get there?

Rachel A. Brune is a former Army journalist and a current news junkie. She resides in North Carolina with her husband, two dogs, and a reliable Internet connection.

The views expressed in this article are those of the author and do not reflect the official policy or position of the Department of the Army, DOD, or the U.S. government.