3 Lessons Colleges Can Learn About Sexual Assault From The Military

Recently, the state of California passed legislature as part of an ongoing attempt by various agencies, colleges, and jurisdictions to... 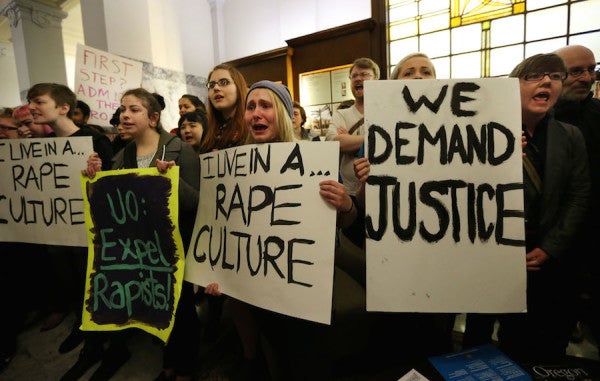 Recently, the state of California passed legislature as part of an ongoing attempt by various agencies, colleges, and jurisdictions to curb sexual assaults on college campuses. The law, which requires universities and institutions within the state to adopt a “consent policy,” addresses an aspect of sexual assault that already plays an important role in the military's training and philosophy regarding rape — namely the necessity of obtaining positive consent from a partner who is not incapacitated through drinking or other substances.

In an article I wrote in May for Task & Purpose, I addressed the fact that part of the reason solving the problem of systemic sexual assault is so difficult is that no proven set of best practices exists. As a recent analysis in the New York Times demonstrates, that lack of provable data and evidence-based policy setting calls into question the effectiveness of some programs, and limits the public and political will to implement others.

There may be many reasons why this legislature may not be as effective as hoped, but there is one reason to implement it, and that is to make forward progress on solving the issue of preventing sexual assault and rape.

Although the problem of sexual assault and rape is part of a larger socio-cultural issue, institutions implementing this policy in accordance with the new laws will not have to do so in a vacuum. In an article for the Wall Street Journal, Richard J. Gelles, a researcher and professor at the University of Pennsylvania, details how looking to the military's response to domestic violence might provide insights to another large institution that recently exhibited this social problem — the National Football League. The NFL appears to have taken that advice to heart, and reached out to the U.S. Army on the issue of domestic violence.

Similarly, campuses looking to implement certain policies, such as those required by law or simply desired by administrations wishing to provide a safe atmosphere for students, might also find some lessons learned by the military as it has striven in the past years to eradicate the problem from its own ranks. Below are three practices that educational institutions may find useful when embarking on their own reform efforts.

1. The military's attitude toward sexual assault is the one it holds toward any mission — that we will attack this problem until it's solved.

Some of the approaches used in the past have been abandoned as they were proven useless or misguided. Other approaches have been derided as attempting to PowerPoint the problem away. Privately, one may disagree with the methods, or hold different levels of optimism regarding whether or not the problem can be solved. But no matter where a service member is in the chain of command, or how closely he or she agrees with it, there is no denying that prevention of sexual assault and rape is a priority across the formation.

2. Leadership. No change will occur until someone steps forward to lead it.

Leaders at every level can choose to undermine or support directives from an individual or agency higher up in the chain of command. In the military, this includes not just company commanders, but leaders at all levels. Similarly, on a campus, this will include not just the administration or faculty, but student leaders as well, both those in formal positions of authority, such as student government or clubs, but informal as well. Getting those leaders on board will go a long way to reforming a particular institution's response to sexual assault.

3. Orient your response around the victim.

This last one that is not confined to the military, but is instead a criminal justice best practice that has been implemented in agencies nationwide, namely victim-oriented policing. Focusing on the victim, especially in cases of domestic violence or sexual crime, can help to empower him or her and encourage cooperation with police and the courts by reducing fear of testifying, re-victimization, or offender retaliation. In keeping with this theory, the military appoints victim advocates: men and women who receive special training to assist the victim of a sexual assault through the entire process of reporting, engaging with police and other authorities, dealing with the pressures of testifying if the crime is prosecuted, and completing the recovery process. By incorporating victim advocacy as an integral factor in their response to incidents of alleged sexual assaults and rape, campuses would demonstrate their support for the victim and provide him or her with the expertise and knowledge that a student might lack, especially in the aftermath of an assault.

There is no single institution that can claim to have “solved” the problem of sexual assault and rape; however, there are some practices that have emerged that have been demonstrated to be effective. As civil and academic authorities begin to debate the approach to eradicating sexual assault and rape on campus, they may find it useful to solicit lessons learned from the institution that has been tackling this problem for the last 10 years.